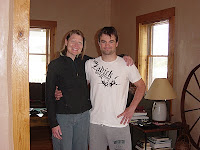 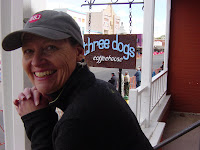 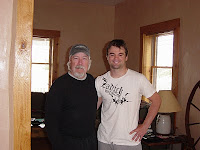 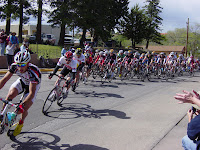 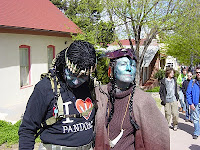 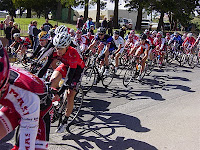 Well, no one could have predicted the kind of weather that Silver City had for the 2010 Tour of the Gila.  It was windy, cold, and ended with a snow storm.  Just incredible...and incredibly unbelievable.  May 2, 2010, and it's snowing in Silver City.  I rarely remember this kind of weather in Upstate NY where I grew up and we had some pretty fierce winters there.

Matt Anderson, one of the Pro riders, stayed with us again.  We met him last year when he first came to do the Tour.  Quite a nice guy and a determined athlete.  Unfortunately, this year, he had not had enough race time in and he moved just before the Tour from Grand Junction, CO, to Boulder, CO.  So, when he realized that he just had nothing in his legs on Saturday during the Criterium, he withdrew from the Tour.  So, today, he slept in and we made pancakes, eggs and bacon for breakfast...then said adios to Matt.  He was headed to Pinos Altos to pick up his friend, Mike, who was also racing.  We're hoping that he'll be back next year to race again.  I will be in touch with him to give him info on my family in Boulder, so they can hook up with each other up there.

Tomorrow is SUPPOSED to be sunny, around 68, so, if it holds true, I'll be back on the bike and will do a 30 miler into the mountains on my touring bike.  All  of next week is supposed to be good weather with some wind on Wed/Thurs, but mid to high 70's.  This is where I will start putting in the miles each week and start adding gear to the bike by June.

I can't say enough about how much Eileen and I like living in this place.  It has been an amazing 4 years for us and we look forward to next year's Tour of the Gila, but, more importantly, we're looking forward to WARMER weather!!!
Posted by Patrick Lyford at 8:50 PM