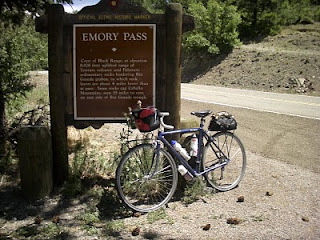 I have been delinquent in my postings.  Since the last post, I have done a century ride (100 miles) and an 82 mile ride to Emory Pass and back.  Both were done on hot/humid days and I survived them, which, to me, says that I'm pretty ready to take off on the cross country ride.  Once I'm on the ride, I'll be stopping at local libraries along the way to post on this blog... text, photos, and videos... and a google map showing where I am at that time.

The 100 mile ride I did about two weeks ago; the Emory Pass ride I did on 7/7/10.  I'll be doing another century ride this week and possibly a ride to Hillsboro and back from the Mimbres Valley... about 68 miles with lots of climbing.  Next week, I'll finish my checklist and start doing daily rides, but shorter distances and a few days with the panniers on the bike with weight in them.

I haven't been as anxious recently about taking off on the bicycle across country as I was a month ago.  Feeling stronger, looking forward to seeing family back in Glens Falls, NY, and doing some bicycling there... makes me anxious to get there.  Also, next week, I'll be checking my daily distances to get an idea of approximately where I should be at the end of each day and what's there.  Trying not to take all the adventure out of this adventure.

I've attached some videos from the century ride and the Emory Pass ride.  Not sure why the voice came out sounding so weird on one of the Emory Pass video, but, hey, enjoy...it's funny.

This trip across country will be so different from my last one in 1988 since I'll be able to be in contact with people almost immediately vs. back in 1988 when I had to look for phones to use my phone card to call folks.  I'm hoping the food will be a bit better this time, too.  The local places are the best; I will be avoiding all chain restaurants unless there is no other option.  The GPS device (SPOT2) that I'm using this time will let Eileen know where I am at all times and I'll be in cell phone range for the most part, particularly after I get out of the Gila Wilderness area.

Posted by Patrick Lyford at 4:29 PM