Well, it's that time of the year in the mountains...forest fires all around us...over 300,000 acres on fire.  Fortunately, not all at the same time.  The Miller fire in the Gila Wilderness is mostly under control, but, as of last night, the two big fires in Arizona...200,000 acres...are zero percent under control.  And the winds are blowing towards New Mexico.  It has been hazy and smokey here since Wed of this week.  Had to close the windows last night to keep it under control in the house.  There is no cooling system in the house...A/C or swamp cooler...so no filtering of the air.  Ceiling fans do the job 99% of the time, but not during fire season.  Per the weather forecast, no precipitation predicted in the near future either...  Monsoons USUALLY start around the first of July, so we have our collective fingers crossed for RAIN.  We also have the heat now, which adds to the difficulty along with the winds and the dry acreage.  Bad combo in these parts.
Over the past two weeks, we had some guests from Scotland.  Phil Williams and Isla...hmm, what was her last name?...I'll have to email Phil and find out.  Embarrassing, eh?  Anyways, they flew from Scotland last Sept/2010 to Argentina and have been bicycling since then.  In the U.S., they're doing the Great Divide Mountain Bike Route to Canada.  They spent 4 nights in Silver City, three of them with us.  Good people, great company, and Phil is a decent bicycle mechanic, too.  Isla is fun, stubborn, and good company, too. 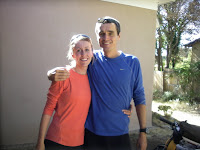 We took them to the Silver City Blues Fest, which is held every Memorial Day weekend.  Lots of people watching, vendors, music, and beer.  Phil and Isla had forgotten to bring their passports with them to the Fest, so Isla went back to our house and got them.  Per New Mexico law, which is stupid, by the way, no one under 21yrs of age can get into the "beer jail" without an ID and, yes, no children allowed under 21yrs of age.  So, families....piss off...no kids in this beer jail.  Stupid. STUPID. STUPID...  So, if you want a beer, you go to the beer jail and you can't see the musicians.  This year, they put up speakers so the people in the beer jail could hear the music better, but could not hear each other talk.  Win some, lose some.  Next year, I'm bringing my own ETOH to drink wherever I want.  At least, this year they let me bring my water bottles with me.  Before, no one could bring in ANYTHING in a bottle.  Period.  The collective IQ of government is assuredly mind boggling, eh? 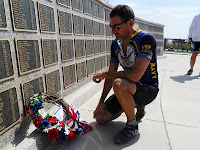 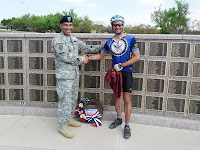 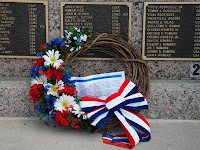 This past week, I rode out to meet Andrew Rivas, who was doing a memorial bicycle ride for his brother, Lt. Col. Raymond Rivas, who died as a result of the Afghanistan/Iraq war: http://manolaw.blogspot.com/2009/07/godspeed-colonel-rivas-rest-in-peace.html.


Andrew thought that, instead of hanging out drinking beer on Memorial Day weekend, he'd do something in honor of his brother, Raymond.  So, he started his annual Flagstaff, AZ, to Las Cruces, NM, memorial bicycle ride https://www.facebook.com/pages/LT-COL-RAYMOND-TREJO-RIVAS-MEMORIAL-RIDE/128368270518165.  Andrew's family grew up in Las Cruces, NM.  I first met Andrew in 2010 by chance when I was out training for my cross country bicycle trip.  We rode back to Silver City together from Cliff, NM, ... about 30 miles.  We stayed in touch and Andrew followed my trip across country via Facebook and SPOT, my gps tracker device.  Next year, I will try to ride out to meet him and spend a few days bicycling with him.  Met his older brother, Ralf, this year.  When I met Andrew on Wed of this week, it was the first time the smoke was really thick, heat was on, and it was humid, which added to the joy factor.  I managed to do 42 miles, but was very tired.  Needed to adjust my bicycle seat because my arms and feet were sore.  After I adjusted the seat, my feet felt better immediately, but it was too late to save my arms.  So, Andrew called his brother, Ralf, and he brought some cold water out to us.  While we waited for him to arrive, Andrew noticed that he had a thumb tack stuck in his rear tire.  With that, we both decided to take a ride with Ralf back to Silver City...about 7 miles.  At first, I thought I had managed to not get a flat tire, but, on putting my bicycle in the back of Ralf's truck, Andrew noticed that my tire was flat.  Yes, a thumb tack...despite the ads for the Schwalbe Marathon Plus being able to resist flats..."even from thumb tacks"...NOT.  Andrew, Ralf and I met later at Jalisco's for Mexican food and a beer.  Andrew continued on to Hillsboro, Caballo Lake and then on to Las Cruces, to finish up at the memorial wall in Las Cruces.  Seems like a good family.  Certainly strong work on Andrew's part.  A Lakota honor song in memory of Lt. Col. Raymond Rivas and all those who have served, and died, for their people and their country.

Enough for this post...I will add some photos and videos and some music and get outta here...thanks for reading/following this blog.  Below is a video of Phil and Isla on the morning they headed out on their bicycles again...heading on to the Great Divide Mountain Bike Trail to Canada.

Posted by Patrick Lyford at 2:39 PM