Traveled to Prescott, AZ, last week to meet with Dan Fallon, Photo/Info on Dan and his blog, Dan's Blog, a cyclist that I met via the Cruzbike website, who owns a Silvio, which is the Cruzbike model I am interested in.  He was kind enough to let me test ride his Silvio and to spend time watching me flail around on the bicycle trying to ride it.  Too bad I didn't have him video my feeble attempts on the Silvio.  Could have sent it to America's Funniest Home Movies show.

To refresh anyone's memory that is actually reading this blog besides me, here's a photo of the Silvio: 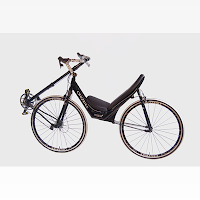 While this is a recumbent bicycle, it has at least one unique feature: a movable bottom bracket.  What that means is that the cranks, bottom bracket, chain rings adjust to the length of the legs of the cyclist.  Sort of a one size fits all type of frame.  The bike has full size wheels, front and back, but, instead of a long chain like most recumbents, it has a regular size chain, which brings me to the other feature that's unique to the Silvio...the front wheel drive.  Now, with most recumbents, there is one sharp learning curve, which is learning to ride a bicycle that you actually sit down on versus riding upright on top of a saddle.  With the Silvio, there are TWO sharp learning curves...riding the recumbent style bicycle AND the front wheel drive factor.

Having never ridden a recumbent before, the task was daunting.  I met Dan at his home in Prescott, where he has been mastering the hills and impressing other riders with his array of recumbents.  As a fellow Irishman, we seemed to hit it off quickly, sharing many common interests in life: beer and cycling.  Brings people together.  So, we chatted, as Irishmen are wont to be doing...a quiet Irishman is a dead one...then got down to trying the Silvio.  I had no concept of what to expect and I was correct.  The learning curve was very sharp and I had to go back to step one...stay on the bike and keep it upright for more than one minute.  While the memories of when I first learned how to ride did not flow into my brain, my body remembered the difficulty of learning how to ride a bicycle.

After numerous failed attempts to even get the bicycle going, I elected to take advantage of gravity.  There were two parking lots above Dan's home, one being slightly higher than the other with a small grade to the two lots.  Taking the bike up to a high point on the upper parking lot, I straddled the Silvio, put one foot on the pedal, let the bike coast a bit, then lifted my other foot and placed it on the other pedal.  Keeping it upright was relatively easy, but all  the knowledge and reactions of my body that I had learned on an upright bicycle failed me.  This was not your typical bicycle.  And, yes, I did take a few spills...a couple of minor ones and one dramatic one.  Making the long story short, I spent an hour plus learning how to be able to get this bicycle going from a dead stop.  Once I had mastered the different center of gravity and the front wheel drive, I was able to maneuver the Silvio.  While I only spent a few hours on the bicycle, I am going to purchase one in the Spring when Cruzbike will have more of the frames available.

Dan and I spent some time discussing the Cruzbikes and the Silvio specifically.  In looking at the frame, I believe it would be relatively easy to modify it to be able to use it as a road bike and a touring bike.  A rear rack can be mounted on the Silvio.

I also found the Extra Wheel bicycle trailer that can carry 66lbs of gear.  It has a lowrider rack on a full size wheel including a fender. 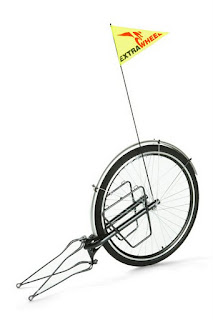 The other change that I would make on the Silvio to accommodate touring is disc brakes.  It eliminates the brakes that are normally on the bike and allows more room for the rear rack.  In reading the Cruzbike forum today, I saw where one Silvio owner put WTB bike handlebars on his bike, which gave him a 60cm wide handlebar that he states gives him more stability with the Silvio and knee/leg clearance.  I have some Nitto bars that I would try first...48cm wide...to see what that would do, but can see how the wider handlebars would help.

The rest of the components that I need for the Silvio I already own and have on my two present bikes.  In a follow up email from Dan after I returned to Silver City, Dan said that I was "one tenaciously serious cyclist".  I took that as a compliment.  Now, "serious" is a term that I'd use to describe Dan.  He's looking at doing the RAAM.  Check this website out and see if you agree with me: Race Across America

Ok, enough for today.  Eileen and I are off to dinner at Jake's 1zero6 restaurant tonight to celebrate our wedding anniversary.  If you're ever in Silver City, be sure to eat at Jake's ...he's only open Fri, Sat, and Sun from 5p-8:30p.  Menu is different each night and every weekend.  Should you make the right decision and go to Jake's, check the website first, find out what he's serving, CALL HIM and make a reservation, including what food you want...otherwise, you probably won't get in and you may not get the food you want.  He orders enough for the weekend and for each meal...no more; no less.  And it is fabulous food.  Not to mention he's one of the nicest guys on the planet.

Here's a tune that we had played at our wedding.  I also played it at my Mom's funeral.  I have strong sentimental connections to this tune:

Posted by Patrick Lyford at 3:06 PM