While out on my regular ride out Rt. 180 on Friday, 1/20/12, I met up with Olli (Oliver) Tillard, a bloke from England, who is bicycling the Adventure Cycling Association Southern Tier Route that goes through Silver City, NM.  After chatting for a bit, we each headed off in opposite directions...Olli towards Silver City; me off to finish my day's ride.  Olli had told me that he thought the night's were pretty cold, so I called Eileen to see if she'd be ok with having Olli spend the night at our house, so he would have a warm night of sleep in a comfortable bed vs. a sleeping bag/tent setup.  She said yes, so I caught up with Olli, made the offer, he accepted and off we headed to the house to drop off our bikes, take showers, and head to Gila Hike & Bike...Olli needed a new pair of cycling shorts.

This was Olli's first bicycling touring trip and he had never tried out his bike with the panniers on the bike before he headed for San Diego, CA, from London, England.  So, no doubt a bit surprising to him, he loaded the bike up with the panniers filled with his required gear, clothing, etc., and found out what it was like to hop on the saddle of a loaded touring bicycle.  Yes, he was surprised!  He had spent a lot of time on a regular road bike and, before leaving England, had the opportunity for a steal deal on a bicycle from a person in London that was headed to Australia for work and needed to sell the bike.  It was about a $2500 bicycle and he got it for $400.  Very good deal, IMHO.

Ok, so now he's heading out of San Diego, riding on what he considers the "wrong" side of the highway, into a nasty headwind.  He's getting bicycle touring lessons early on here.  Got to laugh about that.  In the world of cycling, nothing sucks more than bicycling into a headwind all day on a loaded touring bicycle...or any bicycle, for that matter.  It's a bit over 700 miles from San Diego, CA, to Silver City, NM, and he's been on the road for 10 days.  Pretty impressive for a first time touring cyclists with no experience and his first time touring America.  Ah, that's the glory of being 24yrs old.  The "I can do this" thinking is impressive.

In April, I believe, he's headed off to Officers Training School with the British Army.  He's a college graduate, has worked a couple of different jobs over the past two years since graduating, and decided he wanted to do the Army thing.  I think Olli will make a fine officer and we wish him well.

Before he does that, however, he first has to get over Emory Pass, about 8000 feet plus elevation, and then about a 12 mile descent into Kingston, then on to Hillsboro, NM.  We fed him a pretty good dinner last night along with some beers, showed him around Silver City yesterday...main street, the Big Ditch, had a sub from Diane's Deli, and coffee at Three Dogs Coffee House, which he thought was "splendid".  Ron, at Three Dogs, appreciated having his espresso described as "splendid".  Oh, he bought a new pair of cycling shorts at Gila Hike & Bike, met Martin there, who is also from England...they chatted about football teams and some players...not the NFL, but that other type of "football".

After a breakfast of eggs, bacon, bagels, espresso, Olli headed out for Emory Pass just before 8am this morning.  He looked refreshed and ready to tackle that climb with his loaded touring bicycle.  We wish him happy trails and he's always got a place to stay in Silver City, NM, should he venture this way again. (P.S. I received an email from Olli stating he'd made it to the top of Emory Pass by 1pm!!  Ah, youth and strong legs!  He should have no problems with "hills" after Emory Pass!  Look out, New Orleans!  Look out, Mardi Gras!!!)

As part of Warmshowers.org, we enjoy meeting other cyclists from all over the world and having time to talk about cycling, gear, and life in general, as well as sharing food, spirits and getting to show them around this great small American town.  I helped Olli get signed up for Warmshowers.org, so he can connect with others as he makes his way to Jacksonville, FL, where he will meet up with a few friends then catch a flight back to London.  If you're a cyclist or like meeting people from all over the world, sign up for Warmshowers.org and open your house, apartment or yard up to new visitors with some great stories and find out just how similar we all are on this planet. 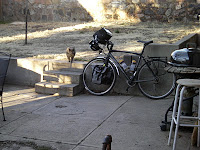 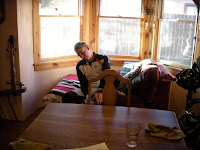 Now, for Olli, who plays the bagpipes, here is a world champion bagpiper for Ollie to enjoy: