Today, Eileen and I started the day out by sleeping in, then getting up, showered, drank our morning double espressos, and headed out the door to Bear Mountain Lodge for brunch.  If you're ever in the area, this is a great place to stay and an equally great place for brunch.  During part of the year, the Lodge also does dinners.   Worth it.

On returning from the Lodge, we both hung out for a while, digesting our meals (dozing, actually).  Lasagna made with phylo dough and lots of fresh veggies.  Really good.  After digesting this meal, I got up and put on my cycling clothes for a shortish ride.  Headed out the door, saying adios to Eileen, who was on the phone with her mother, Marilyn, who lives in Kansas City, MO.  Took the hard, but shorter route today.  At the top of Snake Hill (Market Street), I headed West on Rt. 180.  To my immediate left, I saw two touring cyclists, so I pulled over to their side of the road only to have them bicycle by me without stopping.  WTF?  That was a first.  When I told Eileen after I got home, she said they must be from L.A. or NYC.  I laughed.  Seriously, I have never had touring cyclists just bicycle by me without stopping.  Put me in a funk for a while.  Hope that doesn't become routine for touring cyclists.  Can't really think that it would.

So, may they encounter LOTS of big, steep hills...I kept cycling out Rt. 180, enjoying the view and the weather was superb for cycling.  In the 70's, sunny, nice breeze.  Smile on my face.  Rode out through some of the hilly parts of Rt. 180, then turned around to do the hills again, cut over on the truck by-pass road to Rt. 90, then headed into Silver City, looking to see if Gila Hike & Bike was open.  Wanted to see how the "Gila Monster Challenge Fun Ride" went yesterday.  While the word "Fun" is in the description, it's not my idea of fun.  It's a benefit ride for the SRAM Tour of the Gila road race that's held in Silver City annually. 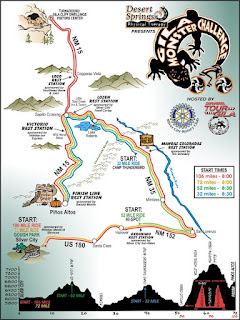 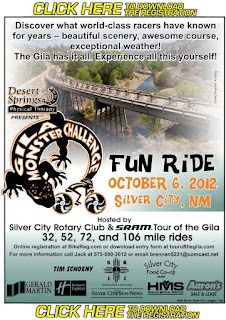 The shop was open, so I went in...Glenn was there.  He's retired from the U.S. Navy and has a collection of bikes worthy of drooling over them.  With his beard, hair, and funky clothing that he wears cycling sometimes, he can look a bit incongruent on his bike.  Once, someone asked me if I knew the "homeless guy" riding a bicycle around town.  Narrowing it down, I realized that he was talking about Glenn.  When you realize that he has thousands of dollars worth of bicycles, you also realize that he's not homeless.  Anyways, there was also a woman there who is doing the ACA Southern Tier Route.  Renata Windsor from South Africa.  To be truthful, what I noticed first was that she was riding a Vitus road bike as a touring bicycle.  This is the first Vitus I've ever seen besides mine.  When I told her that, Dave, the wrench at Gila Hike & Bike, said he has a Vitus bike, too.  WTF?  Well, we got chatting.  Her son bought the frame online for $40 and put it together for her as a touring bike.  Hope I got that right.  Renata has bicycled across Spain with it and it's held up.  Now, she and two mates are doing the San Diego, CA, to St. Augustine, FL, route.  Tomorrow is a rest day in Silver City for them, so she's coming back to Gila Hike & Bike to try out the Bob trailer that a local is selling there.  Who knows?  She may switch.  It would be better than how she has the bike set up now.  Here are some photos:


As I've stated before, this town is pretty cool when it comes to meeting touring cyclists from all over the globe.  Despite the two unfriendlies that I met earlier today, Renata more than made up for them.  Best wishes to her for a safe, fun ride across the South.

Here's a tune for her...a real Texas boy singing, "I'm Holding My Own".  Got to get used to that shitkickin' country music, if you're going through Texas, y'hear?

Now, y'all have to have songs like this one, too...Roy Rogers and Clint Black doing, "Hold On Partner".  Along with a bunch of actors that have played cowboys on screen...enjoy, Renata!
Posted by Patrick Lyford at 7:34 PM