Over the past few weeks, I've taken a number of unconnected photos that I'm going to put into this post.  The bulk of them are from when Eileen and I were in Albuquerque, NM, last weekend.  Eileen met up with some friends a week ago today at Two Fools Tavern, which is on Central Avenue.  It's a pretty good pub and Daine, Pam, and Jeanie make up the trio called Finn's Thumb, which does traditional Irish music.  All good musicians, good people, and all fun to be around.  One photo is a leftover from when Corey McGrath was here.  Two are of a motorcycle outside of Gila Hike & Bike with a dog sitting on the back of the motorcycle.

The biggest surprise was SNOW!  I knew it was supposed to get cold last night, continuing on through today, but snow was not on my radar screen at all.  Got up to pee this a.m., looked out the window, and whaddya know?...white stuff.  Not much, but it was there.  There was snow on the table and chairs in the backyard.  The photo that I took was taken later in the morning, after Eileen and I got out of bed, and most had melted in the sunshine despite it still being very chilly.  Check out the photo...
Okay, on to better things....Here are the photos of the motorcycle.  The guy who owned the motorcycle was visiting a friend in the area and had ridden down from Colorado.  His dog rides on the back of the motorcycle.  While you can't read the sign under the dog, it states, essentially, that the dog is cooler than your dog, and as long as you don't put your hand in its mouth, it won't hurt you.  LOL... 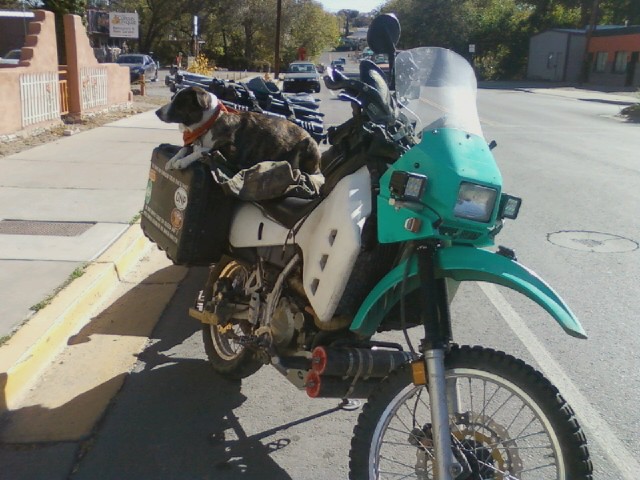 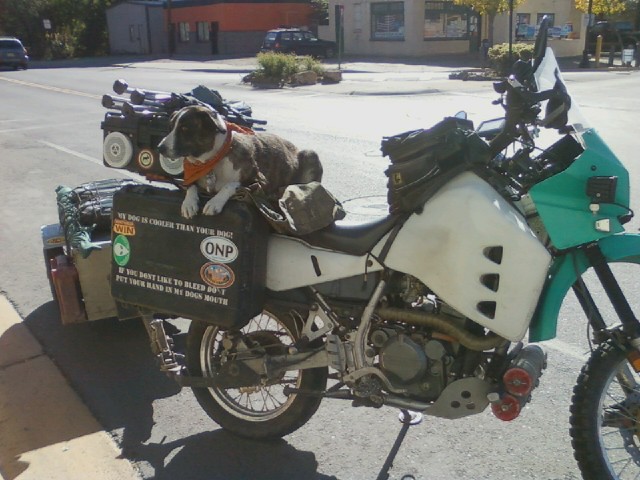 Here's a photo of Corey McGrath, a cycle tourist, who is bicycling from New Orleans, LA, to Los Angeles, CA, after which he'll head back to Victor, ID, where he'll get back to his winter work as a ski instructor at the Grand Targhee Resort and Eileen in front of the Town of Silver City Library, where Corey had gone to get a couple of books from Eileen's stash in her office there. 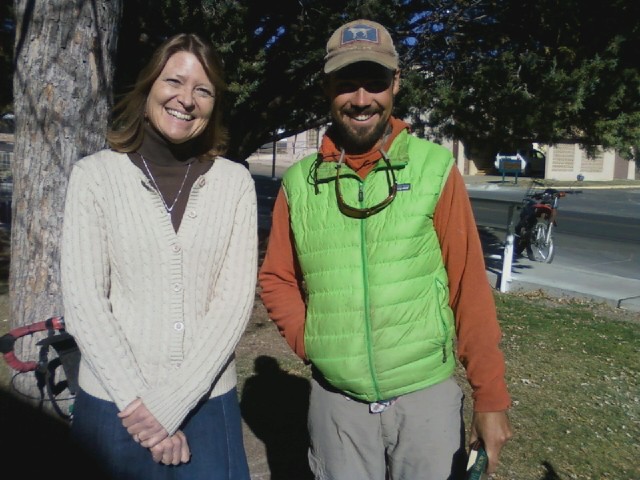 Now, on to photos from the traditional Irish music session from last Sunday in Albuquerque, NM...

So, done with the extraneous photos.  Now, on to an appropriate tune to exit with...Irish, of course...and it's Finn's Thumb doing some Irish tune.  I have no idea what tune it is.  Enjoy anyways...LOL.

Posted by Patrick Lyford at 2:38 PM