A Bicyclist's Rights And Responsibilities...A Big Dose Of Ignorance On My Part

For some time now, in Silver City, and across the country, discussions and debates, and probably more than a few arguments, have been ongoing about the larger issue of bicyclists' rights, responsibilities, and where bicyclists should be "allowed" to ride vs. having complete access to the roads of America.  Now, I lay no claim to a broad knowledge base on this topic.  Instead, despite being an avid cyclist, I'm quite ignorant on this topic.  My ignorance was brought to light via a simple search for a Yahoo group called "Chainguard".  How did that come about, particularly since I'd never heard of this group before?  Nor had I ever heard the terms "vehicular cycling" or "bicycle driver".  Nor was I very familiar with John Forrester, author of Effective Cycling. Or Defensive Bicycling.

Seems time for this aging boomer to get educated.

Annie Crawford, owner/wrench of Twin Sisters Cycling and Fitness in Silver City, NM, and I have been bantering lately about "sharrows", bike lanes, bike paths, etc.  She introduced me to the term "vehicular cyclist". Say what?  I'd never heard that term before and I consider myself a fairly well educated bicyclist.  Back in 1970 or so, John Forrester of England, after seeing the "deferential to cars" type of cycling in the U.S., began to push the concept that cyclists fare best when they act, and are treated, as drivers of vehicles.  A definition of a vehicular cyclist is:  A cyclist who generally travels within the roadway in accordance with the basic vehicular rules of the road that are shared by all drivers and adhering to traffic controls.  Vehicular cyclists, Forrester advises, should feel and act like vehicle drivers, albeit the drivers of narrow and relatively low-powered vehicles.

In Effective Cycling, Forrester introduces what he calls "the five basic principles of cycling in traffic".
As a kid, I remember doing all of the above.  Well, for the most part.  Hey, I was a kid, so, yes, I did the prerequisite stupid stuff, too.  I really wasn't aware of it as a way to ride my bike, but rather as the rules of the road that my Dad taught me.  In my 30's, when I evolved into a more serious cyclist, I learned that state law considered my bicycle a vehicle and, thus, I was required to obey the rules of the road.  The same rules all other vehicles had to follow.  Hmm, common ground?

For the record, I like bike lanes for the space they provide to cyclists.  The main issue with bike lanes and "bike paths" (truly, a misnomer if there ever was one...a "bike path" is merely another name for a sidewalk.  More on that in a bit...) is the false, and therefore dangerous, sense of security that cyclists assume when riding in/on them.  Dangerous bike lanes/paths are ones where cyclists ares REQUIRED to use them even if, by doing so, cyclists are thereby forced to ride in a manner that makes no sense to any sensible human and is a significantly dangerous violation of the rules of the road.  For example, in Portland, OR, a bike lane, adjacent to a highway, veers to the left across a section of roadway dedicated to traffic only going to the right, directly in the path of cyclists.  There are no traffic control devices or signs.  The assumption here (hopefully, by the driver) is that, because the bike lane is painted BLUE, cyclists have the right of way.  In reality, cyclists are now forced to NOT follow the rules of the road.  All emphasis added by me.

Here's a photo to show you what I'm talking about and an article worth reading, "Bicycle Blunders and Smarter Solutions":

In the photo above, the yellow dots in the middle of the photo indicate where cyclists should be riding if they were following the rules of the road.  Thus, cyclists are unnecessarily placed in serious danger here.

Another issue with bike lanes, in particular, is when they are adjacent to a section of roadway that allows for vehicle parallel parking.  A significantly serious problem here is that, when a vehicle's driver's side door is opened, it essentially blocks almost the entire bike lane.  This essentially forces cyclists to either collide with the open door or swerve out of the bike lane, into traffic, with often little or no time to assess traffic that might be coming up from behind.  Here's an example and photo (below) of what I'm talking about: 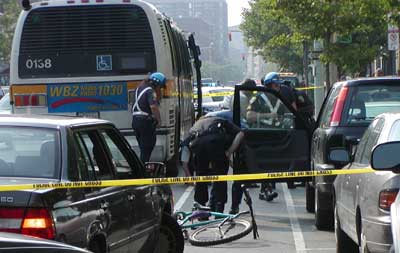 To make the point a bit more personal and real, here's a photo (below) of the 36 yr. old Ph. D student who was knocked to the ground while attempting to avoid the vehicle door that was opened suddenly in front of her, which blocked her lane.  It appears that the right side of the bicycle's handlebars hit the open door, throwing her to the left, under the bus, where she sustained fatal injuries. 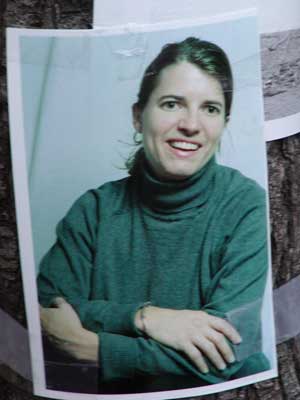 A truly unfortunate coincidence, but this emphasis on the "personal and real" is important here.  I am not talking about inanimate objects.  I'm talking about me, you, a family member, a friend, someone you know, someone you love.  So, please, keep that in mind here.  Not for the emotional sake of this debate, but for perspective.  The ones who lose, often with their lives, are PEOPLE.  It's not academic.

Right now, in Silver City, discussions and meetings are being held to determine what cycling will look like here.  This same discussion is going on in your town, city, or state.  Educate yourself.  Get involved.  As I said before, I like bike lanes.  But, when putting these on roadways, other factors must be considered, particularly rules of the road.  Since these are rules that we all know (hopefully?), it's a starting point with an assumed, inherent consensus.  Another point worth fighting for is to not require cyclists to ride in a bike lane or a bike path.  The decision where to ride needs to be the cyclist's.  Cyclists are in a better position to know whether it's safer to ride in the lane or safer to stick with the commonly followed rules of the road.

Last item for this post...bike paths.  While these can be popular, it's important to note that, for cyclists, bike paths are as dangerous, if not more so, than riding on a sidewalk, which is precisely what these are.  Sure, it's a new name.  But the concept is the same.  The dangers, however, have gone up exponentially.  There are many more people using "bike paths" than sidewalks.  One would think, ah, "bike path", it must only be for cyclists, right?  Wrong.  Adding serious cyclists to this mix is downright dangerous for everyone on the bike path/sidewalk. Some data indicates that cyclists are at greater risk riding on a bike path where there is a constant mix of kids, dogs, walking adults of various ages, strollers, rollerbladers, joggers, etc.  Think of the dangers of driveways, intersections, two lane bike paths where users aren't using the same set of "rules" to guide their behavior, and you get a glimpse of the dangers I refer to.

Data about bike lanes, bike paths, segregating cyclists from drivers, etc., is sketchy at best.  The most recent data is from Vancouver, BC, Canada.  While this seems impressive, it only reflects the outcome for a larger metropolitan area.  It addresses bike lanes and bike paths (also known as segregated cycling lanes or multi-use paths).  In some cities, like New York City, actual physical barriers have been placed between traffic and cyclists (a segregated bike lane), which has increased bicycle traffic and reduced accidents.

Confused?  Hmm, a good place to start from, I think.  Believing there's a single answer is questionable, at best.  Data is confusing.  One question I have is: Do drivers and cyclists adjust to their environment after the addition of a bike lane or a bike path?  Seems like more research needs to be done, under varying conditions and locations.  What works for New York City, Vancouver, or Toronto may be seen as ridiculously unnecessary and costly say in Silver City, NM.

Want more information to maybe help clear up some of that confusion?  Develop an informed, data driven position rather than just an emotional, knee jerk reaction?  Maybe just get a clearer picture on these topics?  Check out these links for some credible and worthwhile data, thoughts, arguments, forums, etc.:

By no means is this meant to be an all inclusive list.  My goal: get cyclists to read up on these issues, ponder them a bit, and perhaps seek out other sources of data and other perspectives.

Working together towards common goals on these issues will make all of us safer wherever we ride or drive.

Now, two points that I'm certain of (well, for now anyways!):
I'd love to hear from any of you about this topic.  In the meantime, here's a tune to fill  your head..."Dazed and Confused" by Led Zeppelin.  This best describes my thinking on this topic, despite my present convictions outlined above.  More to come, I'm sure.
Posted by Patrick Lyford at 12:16 PM