Things That I Believe To Be True About Bicycling

Below are some sites I believe are worth looking at, IMHO...check'em out.  I'm not endorsing them, just posting them for others to investigate.  If you embrace what they're talking about, good for you.

The above links are just a few among the many I've discovered in the past 72 hrs of looking up information on bicyclist rights and responsibilities.  What an incredible amount of information on this broad topic.  Included in this topic are: the rights of bicyclists to ride on all roadways, uniform code for all vehicle operators (bicyclists and drivers), questionable data about bike lanes/bike paths/segregated bike lanes, discriminatory bike laws, helmet safety/laws, plus other issues I was completely unaware of.

Here's a map of the U.S. that shows how States are rated by their bike laws: 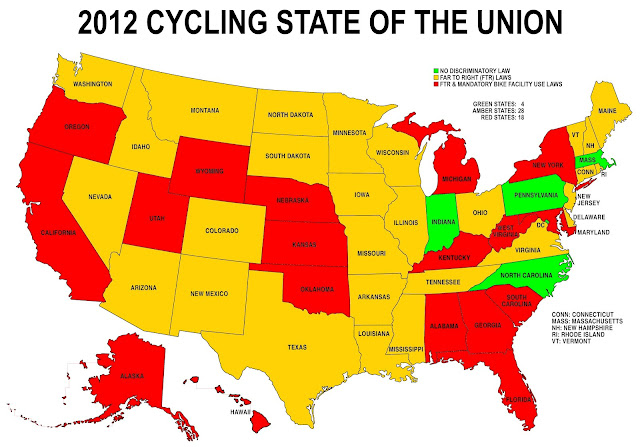 Wow!  This is without a doubt a topic that is aptly covered by my firm belief that "no good deed goes unpunished".  So many ideas, thoughts, beliefs, concepts...I am even more dazed and confused.

Whenever I'm in a quandary as a cyclist regarding a situation and what's the safest, most realistic option/s I have, my humble belief is to go with what I know and have found works for me.  Below are a few things that I believe are true and not just for me.  Get on a bicycle and ride...these will be important to be thinking about:

Well, enough for this post.  What I seem to have discovered here is a HUGE topic.  Ah, ignorance is bliss, eh?  Be prepared.  I'll probably do a few more posts about this topic.  Just two seems inadequate, at best.

A tune to exit with.  Time to get dinner started.  "Bicycle Race" by Queen with Freddie Mercury on lead.

Posted by Patrick Lyford at 4:40 PM