"When I was crossing the border into Canada, they asked if I had any firearms with me.  I said, 'Well, what do you need?'" ~ Steven Wright


Brian Poel spent the night at our house last night.  Our first Canadian...and I didn't even crack a good hoser joke.  I must be maturing.  Anyways, I like this quote.  Canadians, like most of the civilized world, think Americans are a bit crazy about guns.  Truthfully, we are.  I do own guns but I didn't point that out to Brian while he was here.  Didn't want to scare him or make him think I was one of those "crazies".

Brian and his girlfriend, Jacqueline, (Brian calls her "Jac", so I'm assuming her name is Jacqueline) were bicycling from Cedar City, UT, to Phoenix, AZ, but she had to head back to Toronto, Canada, to be back to work last Monday.  After "Jac" left for home, Brian headed out solo on the Adventure Cycling Association's Southern Tier Route, eventually he'll end up back near Toronto, Canada.  So, Brian has been on his own for a few days.  Here's a photo: 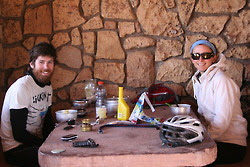 While in Globe, AZ, Brian contacted me via Warmshowers.org to see if he could spend a night at our house.  Checked with Eileen and it was a go.  I let Brian know, so he could plan accordingly.  Yesterday, I headed out to see just where he was and how good he was riding, so I'd have an estimate of when he'd be at the house.  Dinner was ready for him when he got here.  On his way in, about 10 miles out, he broke a spoke.  His second broken spoke on this trip.  Like a couple of other folks we've hosted and who've had issues with their rear wheels, Brian had all his gear on the back of the bike, so his rear wheel was taking a pounding every day, thus the two broken spokes.  Instead of heading straight to our house, I took Brian and his bike to Twin Sisters Cycling And Fitness shop.  Annie Crawford is the owner/wrench and she fixed the wheel in no time...and Brian was ready to roll once again.  Brian and I spoke about using a frame bag to lighten the load on the rear wheel.  As he heads East, if another spoke breaks, he'll look into buying one.  He's riding a Cannondale but it's not a touring frame thus I wasn't able to set him up with the extra front rack that I have, plus the bike has a carbon fiber fork which I don't know enough about to say it would be safe to mount a rack on it.  I'm sure it would but that needs to be Brian's decision.  The frame bag, I think, would be the better choice.  Then he could mount the water bottle cages on the front fork.  Here's a photo so you can see what it looks like: 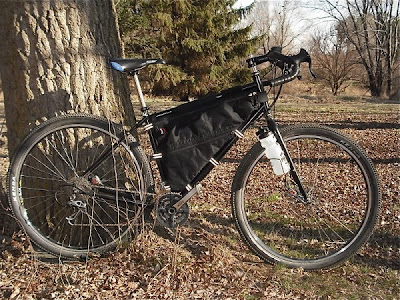 These bags hold a fair amount of stuff, which would allow Brian to lighten the load on his rear wheel.  To understand why there's extra load on the rear wheel when not using front panniers, it's important to understand that when a person sits on a bicycle, 60% of the person's weight rests on the rear wheel and 40% on the front wheel.  When gear is added to this mix, say using panniers, it's important to put 60% of the weight of the gear in the front panniers and 40% of the weight of the gear in the rear panniers.  With this distribution, unless the cyclist is carrying a ton of gear, the weight is equally distributed on the bicycle and doesn't place excess stress on either wheel.  In the photo above, note the water bottle cage mounted on the front fork...in case you were wondering where the water bottles could go.

Brian hails from a farmer family.  His grandfather came to the U.S. and started a dairy farm, which his father continued.  Seeing as this type of living is a 24/7 lifestyle, his parents changed up the farm to cash crops and sold the cows.  They grown soybean, wheat, and corn now, which allows them more down time.  His Dad also sells insurance.  Brian has a degree in agriculture and works in the business..not the family farm...but greenhouse business and other associated business.  He's interested in getting his Master's degree so he can do more research on seeds, plants, etc.  Interestingly, Brian is the first young person (26yrs. old) that is comfortable with GMO plants.  Most of the people around Silver City are not in favor of GMO plants.  We discussed this a bit but I don't want to speak for Brian as to why he supports this type of agribusiness.

While camping on top of the mountain coming over from Safford, AZ, Brian discovered that the Southwest is not all desert and warm temperatures.  He cooked his dinner at Blackjack campground, at the top of the big climb from 3 Way, AZ, but, after finishing his meal, he headed downhill to the lower campground.  In the morning, he stayed in his sleeping bag until his feet warmed up a bit.  Most people think of the Southwest as being warm, flat, and desert.  I assure you all it's not that way.  Temps in the desert can drop dramatically at night compared to the heat of the day.  Once, when doing the Cross Arizona Bicycle Ride, one rider showed up with no tent because he assumed it would be very warm every night and wouldn't need one.  A good example of the bell shaped curve of genetics.

Having survived the cold and had the wheel fixed, Brian took a shower and partook of a few beers while I finished getting dinner ready for when Eileen got home.  Dinner was good.  The ice cream dessert was better.  Brian headed to bed and, in the morning, I fixed bacon, French toast, and some good espresso for us all.  After breakfast, Brian got around to cleaning the drivetrain on the Cannondale.  I provided the Simple Green to do the initial cleaning, followed up by Purple Extreme Golden Degreaser.  The combo does an excellent job of cleaning up the drivetrain.  With the chain all shiny and new looking, he put some Phil Tenacious Oil on the chain and drivetrain, wiped it down, and he was set to head over Emory Pass to Hillsboro, NM.  Plus the weather was going to be great for the day's ride, too.  About 60 degrees, sunny, blue sky, and minimal winds.  Dream day for touring.  Brian will be meeting up with his Dad when he gets to the Natchez Trace Trail to ride back home with him.  If you're interested in following Brian's blog about his bicycle trip, it's here...Out on the Bike.

So, on to the videos...nobody is talking like Donald Duck in these like some of my previous videos.  Who know why, but the camera has been acting right.  Go figure.
Eileen and I enjoyed having Brian stay with us.  I'm always happy meeting younger touring cyclists.  They make me think much more positively about the future.  Reading the news on a daily basis, I'm often certain that the world is going to hell quicker than we think, but it's what sells the news.  Getting out on a bicycle and touring America gives you a completely different picture of our country.  Try it sometime.  Even for just a night or two.  Get out and say hello to the immediate world around where you live.  It might put a smile on your face.

Ok, now, a tune for a Canadian?  The one that comes to mind is from Monty Python, "I'm A Lumberjack And I'm Ok".  LOL...couldn't help myself, Brian.  Enjoy!