Sittin' In the First Row At The Bus Depot...

"You now have, and always have had, all the time there is." ~ Unknown

Annette Funicello died yesterday as a result of complications from Multiple Sclerosis.  Memories poured through my brain. 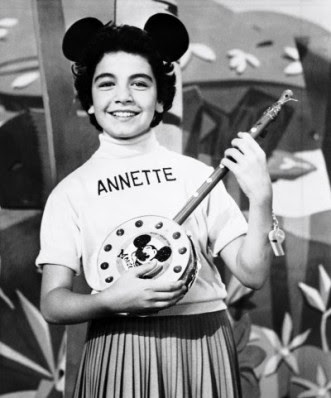 Gary Langdon, my best friend then...and now.  His family and their house on 4th Street.  As a kid, every Sunday, I'd ask my folks if I could go to his house to watch the Walt Disney show.  We couldn't get it on our TV.  The Langdons only lived about 4 or 5 houses down the street.  Don't know why we couldn't get it on our TV, but that was the way it was.  I didn't have a crush on Annette or any of the other Mouseketeers back then.  Later, when I was older and she was doing the beach movies with Frankie Avalon, I did.  She was beautiful.  Now, in my 60's, I can see that she really was beautiful.  She struggled in the end times of her life.  Wheelchair bound, bed bound, unable to feed herself or speak.  More strength than I could muster.  Here's a short clip that brings back lots of memories for me:
This is one of those entries where I wonder where time has gone?  Thus, the quote above.  Finally, one that fits the topic.  As for the title, it was a joke I started to use back when I realized that the generations before me were dying off...and weren't coming back.  I used the setting of a bus station as a metaphor for life and death.  Those sitting in the first row were all doing different things, but, without exception, they were the ones expected to get on the next bus.  Didn't always turn out that way.  Accidents, poor health, war, and just plain bad luck frequently took someone from the 4th row or the 10th row or right out of the shute.  Unpredictable, but, generally speaking, it was those in the 1st row who got on the bus.  Now, I'm sitting in the 1st row.  The death of a mouseketeer reminds me of that fact.  Anxious?  Scared?  Accepting? To be truthful, I experience all of those emotions and more.  More fortunate (?) than those of my generation that have gone on before me, I'm grateful for being able to have lived this long and still be able to ride my bicycle.  Some can't.  Most won't.  Death doesn't really appeal  to me, but my lot seems chosen for me.  Inevitably, death stalks all of us.  What we do with that knowledge is another choice.  Thus, my quote...you now have ALL the time there is.  It's been that way all of my life.  Each stage of my life, the lesson becomes clearer and stronger.  A motivator in its own right, time challenges me to do what I do.  More so now that I'm sittin' on the 1st row bench at the bus depot.

I could fantasize about a time machine or a machine that would restore my body to its youthful strength, but that's not in the cards.  Not yet anyways.  Doing so only wastes more of my time, so I keep those thoughts fleeting.  I choose to use time as my motivator.  Despite growing old, I've not let my brain or my thinking grow old.  Bicycling has helped me utilize my strengths and my time.  My parents also helped with the mindset I now have.  Never once did I see them worry about dying.  They were more interested in living.  For that, I'm very happy.

So, God speed, Annette, and thank you ... for the memories, the fantasies, and the motivation to keep ridin'.  In your memory, a tune to exit with...for you and me...Frankie Avalon singing "Venus", one of 100's of 45rpm records I had...still have...and Gary and I played endlessly..and I mean ENDLESSLY.  I'm surprised they're still in good shape.  By the way, Annette was born in Utica, NY, not far from my hometown.