Ok, on to Ralph "Yukon" Krauss. While on one of my rides up to Pinos Altos, NM, I stopped at the Pinos Altos sign at the top of the first climb going up into the mountains. As I sat down to drink some water, I spotted a rider coming towards me. By this time, I should know that riders doing the Great Divide Mountain Bike Route look pretty dingy by the time they get to Silver City, NM. My first thought was, "What's a homeless guy doing riding a bicycle up here?". LOL... The "homeless guy" was Ralph "Yukon" Krauss and he was doing not just Adventure Cycling Association's Great Divide Mountain Bike Route, but the Great Divide Mountain Bike RACE! As we were talking, he was switching jerseys and asking me to take his photo. Guess he wanted to look cleaned up for the shot. Done with that, he asked if I'd shoot a video of him with his camera. Obliged him. 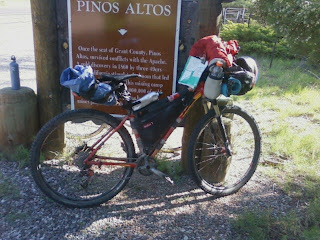 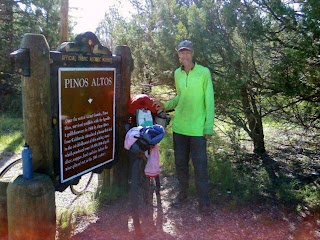 Once done with the photo shoot, he and I began asking each other questions.  Not the usual ones, but a few.  He's professor emeritus at a college where he's been employed since the 1970's.  Teaches electronics, I think, and special ed stuff.  No, I didn't get into details with him since most of the time cyclists talk to each other about their bikes, gear, and cycling.  What kind of work they do is really irrelevant, to be honest.  Lawyers don't ride faster than plumbers, y'know?  We're all interested in what we're looking at that the other person is: 1) wearing 2) riding 3) has on their bike.  Nothing more.  Well, not true.  Where are you from?  Where'd you start?  Where are you going?  How long have you been on the road?  What's the longest ride you've done in a day?  What's the longest you've been on your bike in a day?  What's the most you ate at one meal?  Those are the kind of questions that are meaningful when two or more riders meet up.

Since it was early, Ralph was looking for a McDonald's for breakfast, then a bike shop to buy a new pump, and somewhere to buy food before he left Silver City.  Oh, and the first important question I answered for Ralph was, "Is it downhill from here?"  "Yes, all the way down."  Ralph smiled.  Downhill is good.  And McDonald's was at the end of the downhill, too.  Ralph headed out after switching back to his yellow jersey that needed a good washing.  I made an adjustment of the cleat on my Keen sandals before I headed down.  In no time, I caught up with Ralph to talk some more.  He got the nickname "Yukon" because of time he's spent in Alaska and the Yukon.  He did a ride up there but I don't remember the name of it.  I'm not a fan of mountain biking, but I appreciate the effort it takes to do the divide route and appreciate the effort of the race even more.

In checking the Tour Divide Leaders website, I discovered that Ralph was 78th of the 143 riders that started out back on June 14, 2013.  It's a rugged ride just to do the regular Divide Route, but to do the Race takes a lot more effort.  I'm very impressed.  Later in the day, I was downtown on my Cannondale ST-800 touring  bicycle and ran into Ralph again.  He was just heading out of town heading south to the Mexican border town of Antelope Wells, NM.  From there, he'd arranged a ride to Tucson, AZ, where he hoped to pick up a used Volkswagen bug to drive back to New Lennox, IL, near Chicago.  Had to be back to teach at the college.

One of the things that truly impresses me is how mountain biking touring has changed up how gear is carried, or can be carried, on a bicycle now.  Panniers and trailers are still available, but, for those wishing to travel light and compact, mountain bike touring bags and setups have changed the landscape for road touring, too.  Frame bags.  Handlebar bags.  Compact rear racks/bags.  All have contributed to a different way to tour.  Some good changes, too.

Alright, a tune to exit this post with...hmm, what would work here?  How about Neil Young doing "Long May You Run"?  Always one of my favs.  Here's to you, Yukon.  Long may you run...

Posted by Patrick Lyford at 9:04 PM