"I wouldn't recommend sex, drugs, or insanity for everyone, but they've always worked for me." ~ Hunter S. Thompson

Words filled with such emotion.  I figured they'd get more attention than if I said there were tons of dead, maimed, dying, cannibalistic, and sex craved grasshoppers out on Rt. 180 since that's what this post is about.  Seems like every year, during and near the end of the monsoons, critters start coming out of the woodwork...flies, mosquitoes, grasshoppers, just to mention a few.  Flies and mosquitoes are very annoying so their presence seems to be what most people notice.  As a cyclist, I notice the grasshoppers.  They're everywhere along the roadways around Silver City, NM, these days.

Why would I notice them?  They're so plentiful that I sometimes have to weave the bicycle through groups of them so I won't crush them.  Not always successful either, as the loud crunching noise as I run over one by mistake tells me.  They seem to like to come out onto the highway where, of course, they're run over by the vehicles on the highway.  Sections of the roadway are covered with these "stains" (that's what the marks look like to me) where the remains of the deceased have been literally pulverized.  Interspersed along the side of the road or on the road itself are thousands of grasshoppers.  Not so bunched up as you might think, but spread out over miles of highway.  Most are dead, many are maimed, and more than a few them showing their cannibalistic side...chowing down on one of their dead brethren, while others are copulating, trying to reproduce before they're flattened under the wheel of an oncoming vehicle.

These grasshoppers are not the small ones that I've seen back East.  In the West, like other things, grasshoppers get big.  Sort of like the sky.  Nothing too small out here.  The ones I saw today remind me of Japanese Samurai warriors.  Check'em out... 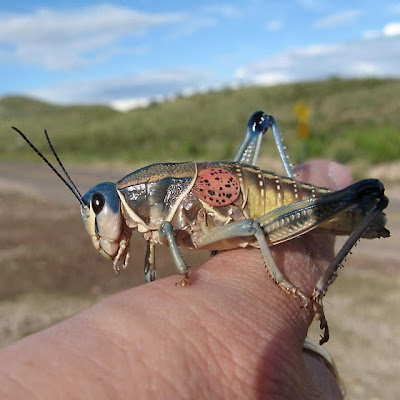 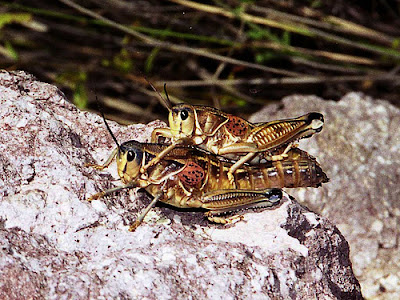 I didn't take these photos.  Got them off the internet so you'd have better pics than what I took with my cellphone.  Alright, no need to beat a dead...grasshopper, eh?

I did meet up with a touring cyclist, Darryl Daghita, from Sterling, NY, near Syracuse, NY.  Took his picture, or so I thought, but there was nothing on my cell phone when I got home.  He started his ride in Kentucky and is on his way to hook up with his brother in L.A.  Darryl doesn't own a car. Perhaps he'll stay in L.A., get a job, who knows what else.  Dude was decked out with a ton of tattoos...told him he reminded me of my friend, Jake, who owns/cooks at 1zero6 restaurant here in Silver City, NM.  Darryl told me that I was the 6th person he'd met who was from Upstate NY just in the past several days.  Before I forget, be sure to check out the NY Times article on Silver City, NM.  Jake gets a few photos and a good write up in the article, too.  As does Mitch Hellman, who owns Alota Gelato, which is good for their businesses and for Silver City, NM.

Now, a tune to exit this post with...nothing weird, I promise.  Miles Davis doing "Summertime" from Porgy and Bess.  Good one since summertime is over.  72 for a high today.  Enjoy...