MERIT BADGES, FEELIN' LEGIT, AND A PLACE WHERE CYCLING FEELS RIGHT AT HOME...

I've never written to you before, but I really need your advice. I have suspected for some time now that my wife is cheating on me. I see the usual signals; the phone rings and when I answer, the caller hangs up. My wife has been going out with ‘the girls’ a lot lately, although when I ask for their names she says, “just some friends from work, you don’t know them.” I try to stay awake to see when she comes home, but I always fall asleep. I think deep down, I just didn't want to know the truth.

Last night she went out again and I decided to really check on her. Around midnight, I decided to hide in the garage behind my road and mountain bikes so I could get a good view of the street when she arrived home from her night out with ‘the girls’. When she got out of the car, she was buttoning up her blouse, which was open. She took her panties out of her purse and slipped them on. It was at that very moment, crouching behind my bike, I noticed a slight crack in the downtube, two inches behind the headset. Is this something I can fix myself, or should I take it back to the bike shop?

A humorous post about cycling...for your enjoyment.  This is in response to my nephew's significant other's comment on her post about her first century bike ride.  For those who aren't sure what a "century bike ride" is, it's 100 miles on a bicycle...pedaling.  Not as easy as one might think nor as hard as one might fear.  In the comment section on Nancy's post, one person said she thought she was more "legit" as a cyclist having done a century ride and Nancy said it was like earning a "merit badge".  There are a variety of views of cycling.  Please see below: 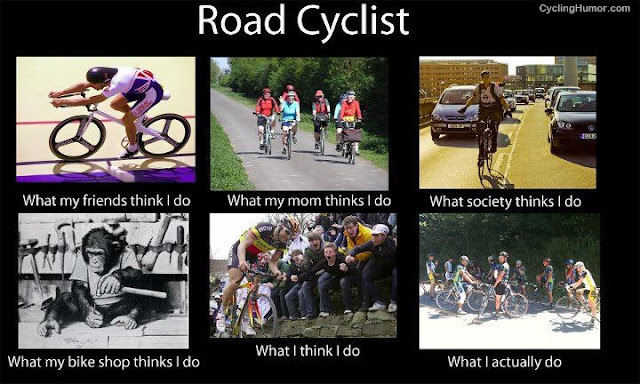 Often, in the day to day cycling world, things get taken to extremes, as in the video above.  In reality, cycling is cycling.  America has taken cycling to a whole different extreme vs. Groningen, Netherlands.  Read the article and watch the video about cycling in Groningen and you'll see what I mean.  The cyclists there seem to remember what cycling is all about vs. the racing mentality that permeates American cycling culture.  Touring has a somewhat different take on cycling, but has a culture all its own, as well.  With its own lingo, lifestyle, etc., associated with it.  I am caught up in all of it, but have been trying to dial it all back to just cycling for the fun of it.  Sort of like my own version of "bike rehab".  I don't keep track of my rides, my cadence, my elevation gain/loss, time spent on the bike or anything remotely connected to tracking my data.  At the end of every ride, I delete the ride from my Garmin GPS and start again.  The one data piece I keep track of is total mileage.  As I said, I'm still in "bike rehab" and I haven't given up everything yet.  It takes time.  My bikes are over 20 yrs old, not by choice, but rather just having kept them for so long.  One day, while in a local bike shop, another cyclist asked about my Cannondale.  When I told him about it, he said, "Wow!  It's an antique."  WTF?   Oh, right, it's an antique.  Well, I didn't realize that until that moment.  Again, cycling is cycling...the bike works, as does my Vitus, and I keep riding them.  Despite the fact that they're antiques, they're still only worth a few bucks.  Would get more to part them out but that would break my heart.  Couldn't/wouldn't do that.  Not ever.

Seems to me, from this saddle anyways, that cycling is about getting on the bike.  Whatever your state of fitness is determines if a 10 mile ride is hard or a century ride is within reach.  Both are accomplishments.  Getting on the bike and riding is the accomplishment.  The mileage you ride is the icing on the cake.  Other riders, scenery, restaurants, pubs, etc., are other layers of icing.

Alright, another funny video...be sure watch it all the way through to see the last little clip.  Absolutely hilarious!!!
Yet another video...a short one, but one that shows that cycling is DIVERSE...and there's a bike for everybody out there.  Get on one and RIDE...
Now, a tune to exit with.  No, not Queen, something else...Frankie Lymon and The Teenagers singing "Why Do Fools Fall In Love"...back when I was just a kid and riding a bicycle was just ridin' a bicycle.

Posted by Patrick Lyford at 4:44 PM