FEELIN' THE LOVE YET AGAIN... 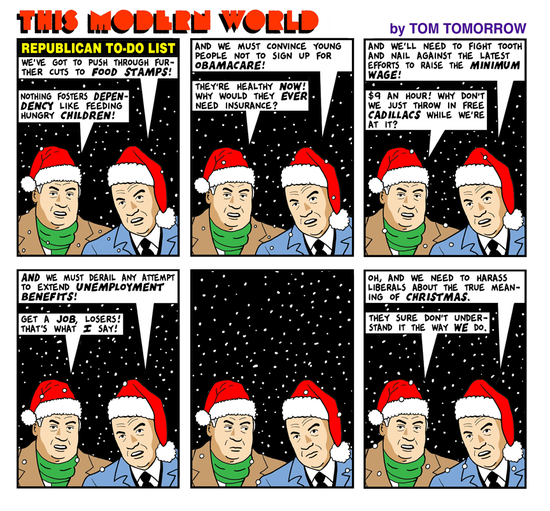 The Punishment Cure
By PAUL KRUGMAN

Six years have passed since the United States economy entered the Great Recession, four and a half since it officially began to recover, but long-term unemployment remains disastrously high. And Republicans have a theory about why this is happening. Their theory is, as it happens, completely wrong. But they’re sticking to it — and as a result, 1.3 million American workers, many of them in desperate financial straits, are set to lose unemployment benefits at the end of December.

Now, the G.O.P.’s desire to punish the unemployed doesn’t arise solely from bad economics; it’s part of a general pattern of afflicting the afflicted while comforting the comfortable (no to food stamps, yes to farm subsidies). But ideas do matter — as John Maynard Keynes famously wrote, they are “dangerous for good or evil.” And the case of unemployment benefits is an especially clear example of superficially plausible but wrong economic ideas being dangerous for evil.

Here’s the world as many Republicans see it: Unemployment insurance, which generally pays eligible workers between 40 and 50 percent of their previous pay, reduces the incentive to search for a new job. As a result, the story goes, workers stay unemployed longer. In particular, it’s claimed that the Emergency Unemployment Compensation program, which lets workers collect benefits beyond the usual limit of 26 weeks, explains why there are four million long-term unemployed workers in America today, up from just one million in 2007.

Correspondingly, the G.O.P. answer to the problem of long-term unemployment is to increase the pain of the long-term unemployed: Cut off their benefits, and they’ll go out and find jobs. How, exactly, will they find jobs when there are three times as many job-seekers as job vacancies? Details, details.

Proponents of this story like to cite academic research — some of it from Democratic-leaning economists — that seemingly confirms the idea that unemployment insurance causes unemployment. They’re not equally fond of pointing out that this research is two or more decades old, has not stood the test of time, and is irrelevant in any case given our current economic situation.

Ask yourself how, exactly, ending unemployment benefits would create more jobs. It’s true that some of the currently unemployed, finding themselves even more desperate than before, might manage to snatch jobs away from those who currently have them. But what would give businesses a reason to employ more workers as opposed to replacing existing workers?

You might be tempted to argue that more intense competition among workers would lead to lower wages, and that cheap labor would encourage hiring. But that argument involves a fallacy of composition. Cut the wages of some workers relative to those of other workers, and those accepting the wage cuts may gain a competitive edge. Cut everyone’s wages, however, and nobody gains an edge. All that happens is a general fall in income — which, among other things, increases the burden of household debt, and is therefore a net negative for overall employment.

Still, don’t expect prominent Republicans to change their views, except maybe to come up with additional reasons to punish the unemployed. For example, Senator Rand Paul recently cited research suggesting that the long-term unemployed have a hard time re-entering the work force as a reason to, you guessed it, cut off long-term unemployment benefits. You see, those benefits are actually a “disservice” to the unemployed.

So the odds, I’m sorry to say, are that the long-term unemployed will be cut off, thanks to a perfect marriage of callousness — a complete lack of empathy for the unfortunate — with bad economics. But then, hasn't that been the story of just about everything lately?

Posted by Patrick Lyford at 6:07 PM