A New Year...And A Look Back

"New Year's Day now is the accepted time to make your regular, annual, good resolutions.  Next week, you can begin paving hell with them as usual." ~ Mark Twain
2014.  It FLEW by.  When I was a kid, summers seemed to last close to forever.  The time between Thanksgiving and Christmas was, I'm certain, an eternity.  Ask any kid waitin' on Santa!  Now, I'm wondering how to put the brakes on time.  It is gaining speed faster than I can believe...
Looking back on 2014, I'd say there are several things that stand out for me.  Way too many deaths.  My very good friend, Bruce Doeren, whose death I'm still coming to terms with.  His death was the hardest for me personally this past year.  The best cousin a person could ask for, Barb Sullivan Penders.  Another classmate or two from high school.  My nephew, Stephen Taft, died much too young.  Several others who were large presences in my youth back in Upstate New York.  I am thankful for having these people in my life, some more so than others, but, all in all, my life would have been different had they not been part of it.
The other thing that gathers family, friends, and others is a wedding.  In September/2014, my nephew, John, and his significant other, Nancy, got married.  Some photos of the event... 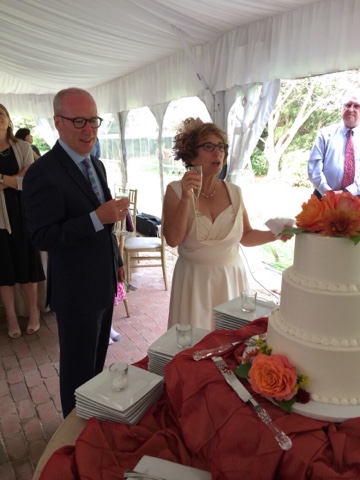 Now, here's a link to a video where John shows his new bride exactly how the cake thing is SUPPOSED to be done at a wedding:http://youtu.be/QnzJoUrlQMI  First time I've ever seen this at a wedding, too.  Oh, well...we're all very happy for John and Nancy despite my nephew's attempt to demonstrate who, at a wedding, gets first dibs on the cake.
As for bike stuff, this year brings new things...starting with a new, long, solo tour for me.  My goal is to ride around the U.S. and Canada, for approximately 9,000 miles.  I'm probably in the best shape now than I have been in years.  After this ride, I'll be doing some different types of rides.  Instead of long rides, I want to do rides, like the spokes in a wheel, from a central location.  Places where Eileen and I want to go and really get an indepth take on the countryside and what a particular place has to offer.  And Europe.  Ireland, France, Italy, Switzerland, Austria, Germany.  Most of Europe, but especially Ireland, France, and Italy.
Enough for this post.  Next one, I'll go over some of the gear I'll be taking with me on my tour and why.  So, for an exit tune, here's Neil Young doing "Long May You Run"...for John, Nancy, for my family, friends, for those I've yet to meet...http://youtu.be/WYna-UAt75c
From Auld Lang Syne:
And there’s a hand my trusty friend!
And give me a hand o’ thine!
And we’ll take a right good-will draught,
for days of long ago.
Posted by Patrick Lyford at 9:32 PM