Blue Skies, Westerly Winds, And Heading Down The Road...

"If you come to a fork in the road...take it!" ~ Yogi Berra
After saying adios to Eileen, my wife, I headed East on Rt. 60 for Mountainair, NM, 40 miles down the road.  Unexpectedly, I encountered a rider about 4 miles from my starting point.  The first one of this trip.  Garrett works in the oil fields in Montana, is 23 yrs old, has never done a bicycle tour before (nor had he done any training prior to doing this tour) and wasn't able to convince his housemates to join him on the tour.  He had a break from his work, so he bought a Surly Disc Trucker touring bicycle (http://surlybikes.com/bikes/disc_trucker), panniers, etc., and headed out from North Carolina on Dec. 5, 2014.  Having been on the road for 21 days, he was headed to Los Angeles, CA.  He's been riding about 120 miles a day and expects to finish by the end of March, which is Tuesday.  From there, it's back to Minnesota where he's from, then back to work in the oil fields.  I took his photo after we'd talked for a while. 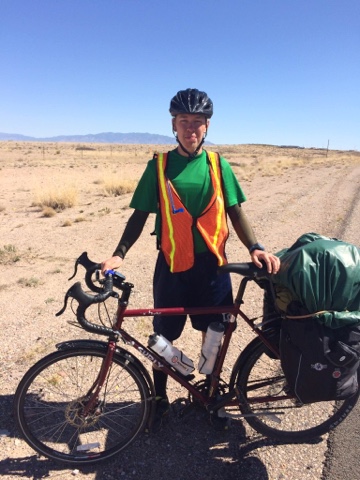 After taking the photo, he asked me if I'd text it to his Mom in Minnesota, which I did.  We said goodbye, wished each other well, and we were off in opposite directions.  Shortly after parting, I received a text from his Mom, who was worried because she thought his "lips were swollen".  Assuring her that was not the case, I informed her that her son was doing great, in fine spirits, and was looking strong and very capable of finishing his tour.  She was relieved to hear it.
The road to Mountainair soon started to gain in grade and I was working hard.  As I kept going, the climbing became more obvious and I was soon pedaling harder.  Being strong enough to push a gear doesn't always mean you should.  Soon, my left knee began to hurt.  Initially, I wasn't sure what was up, but began to realize that I had to stop pushing the harder gears.  By the time I got to Mountainair, my knee was hurting, so I took a couple of aspirins and soaked in a hot bath.  Next day, all was better and my knee was fine.  Perhaps the one aspect of traveling on Rt. 60 is the wide open space.  For those who live in these towns, it's somewhere.  For me, it's still the middle of "nowhere".  A brief video to prove my point: http://youtu.be/L4B8KFIhe9k
Prior to leaving, I had decided to stay at motels for the first week to give me a good place to sleep (maybe!!!), check my gear, rearrange it so it felt better to me on the Cannondale, and to make the adjustment to bicycle touring that I know takes place that first week.  In Moutainair, I readjusted the load on the bike and it rode better the next day going to Vaughn.  Riding the bicycle with a heavy load on it gives the bike a completely different feel to it.  It feels heavy initially, but I'm becoming acclimated to the weight.  It takes considerably more effort to control a loaded touring bicycle.
Not much to write home about in Mountainair.  I stayed at the Turner Inn & RV Park, which was a decent place.  Once again, I readjusted the load and it felt better the next day heading to Vaughn.  What was good about this day was the decent that got better the farther down the road I traveled.  Now, I'd like to go on and on and on about Vaughn, but you'd have to ask..Why?  Another desperate town in Eastern New Mexico hanging on because of the workers on the railroad.  Food there...awful.  So, next day, I headed off to Fort Sumner, NM, where Billy the Kid is buried.  It's the main attraction in Fort Sumner.  Period.  These places just astound me with their ability to hang on to the thin economic edge that's there.
The good part of the ride from Vaughn to Fort Sumner???  Another unique encounter made this ride one to remember.  After cresting one of the numerous rollers, I spotted a couple of guys next to what I thought were lawnmowers while standing next to a BNSF (Burlington Northern Santa Fe) railroad truck.  Mowing the grass???  WTF?  As I got closer, and the truck pulled away, I realized the "lawnmowers" were bike trailers.  So, where are the bikes?  Kept trying to see if they were down on the ground and these guys were just taking a break.  Nope.  By this time, I'm right up to them and one of them yells, "Hey, another American flag!"  Trying to stop a heavy loaded bike takes a bit of time, so I ended up cruising past these guys before I could slow down enough to turn back to talk to them.  As it turned out, I was correct.  NO bikes!  Just bike trailers.  Another WTF?  "What are you guys doing?" "Walking across America." "Jesus...why?" "For the health of it." "You mean for the HELL of it, right?"  We all laughed...  Seems like Forrest and Mike had dropped out of college, worked for a bit, then decided to do this because, once they got jobs, relationships, and the assorted responsibilities that accompany that sort of stuff, they knew the likelihood of being able to do it then would be minimal, at best.  So, they're walking from Jacksonville, FL, to Seattle, WA, pushing these bike trailers with their gear, clothing, water, and food.  I was seriously impressed.  Mike was impressed that I had my PubQuest cycling jersey on and wondered if that was my quest on the bike.  Well, a little...and the Civil War.  Oh, and my high school reunion.  These guys were the most unique thing I've encountered since the Japanese guy rollerblading across America back in Oregon in 1988.  Once they get to Seattle, they're buying bikes, etc., and riding back to Marquette, MI, where they're from.  Or maybe New York, if the weather is good and they have time. 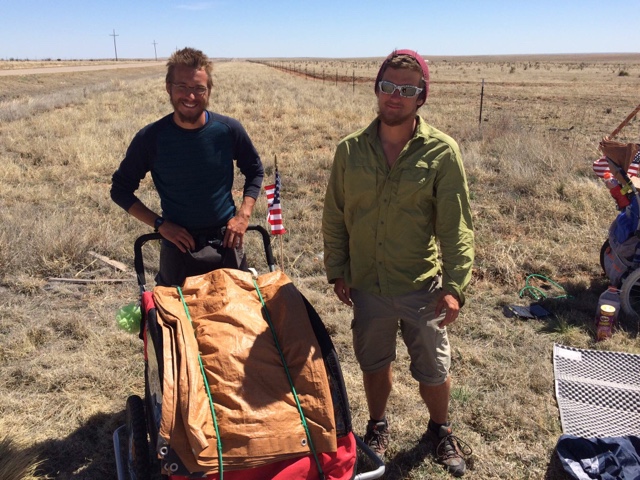 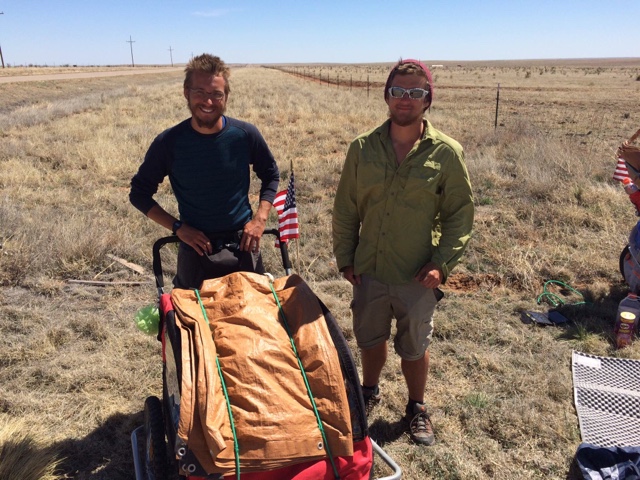 Can you believe the smile on Forrest???  They're walking around 25 miles a day.  And he's smiling.  Gotta love this kind of attitude.  And determination.  We talked about rattlesnakes, which I told them not to worry too much about those critters.  Ants were the biggest pain in the ... wherever they bit you.  Mike had already had an encounter with ants, so he agreed with my comments.  They're headed to San Francisco before arriving in Seattle.  And they're headed there via Death Valley!  Whatever is motivating these guys, it's formidable.  People think I'm crazy to ride across America???
A very brief video: http://youtu.be/FBymZbcaQSA
After saying our goodbyes, I continued on to Fort Sumner, NM, where I once again readjusted the gear and the next day to Clovis, NM, went really well.  No doubt, I was getting stronger, too.
Ok, enough for this post.  Now, a tune to exit with.  EmmyLou Harris and Gram Parsons doing "A Song For You".  Some of the photos remind me of places I've been through so far on this ride.  Next post, a bit of Clovis, Texas, OK, and into Kansas.  Yikes!!!
Posted by Patrick Lyford at 6:44 PM