The Gods of weather and wind have been kind to me.  Since I started on Sunday, March 22, 2015, the wind has been at my back, pushing me on, helping me to cover considerable miles of roads at a fairly good clip.  My day into Clovis, NM, was a bit overcast, but, again, the wind was at my back making the effort quite a bit easier.

In Clovis, I'd made arrangements via Warmshowers to stay with Bill and Linda Servatius.  Bill is a member of the New Mexico Touring Society and has quite a bit of bicycling experience.  Unfortunately, I forgot to get a photo of the trailer he set up to use on a New Mexico Touring Society ride in Silver City, NM, ... the Inner Loop ride.  Having seen the trailer in Silver City, I recognized it when I got to Bill's place of work in Clovis.  He'd brought it in to carry my bike and gear back to his house rather than have me ride out there.  Once at his house, I took a shower, got settled in, and sat with Bill for some good conversation.  His wife, Linda, was substitute teaching that day and arrived home shortly after we got there.  Showers feel so good after a day in the saddle...and the beer Bill offered was just as refreshing.  Linda cooked dinner, which was very tasty, while Bill cooked breakfast, which was also very good.  Eileen and I do that whenever riders stay with us.  It really is a big help to riders to be able to feed them and send them on their way. 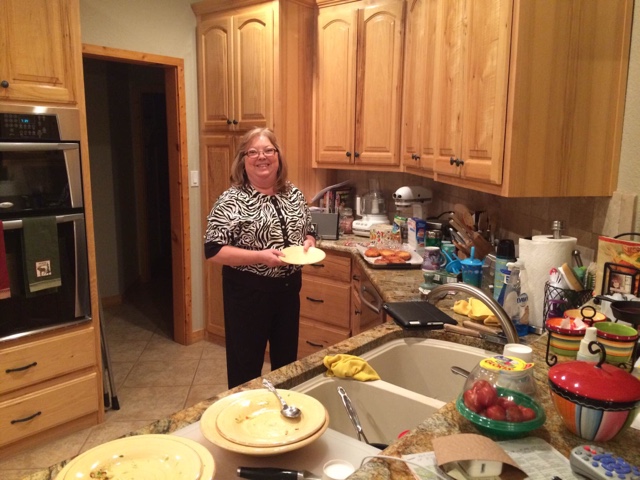 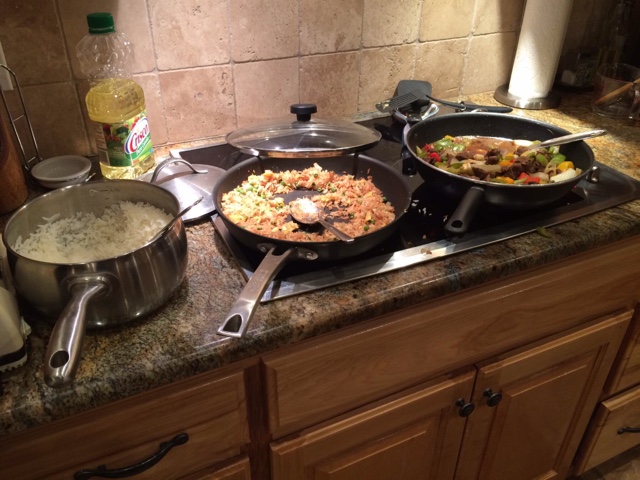 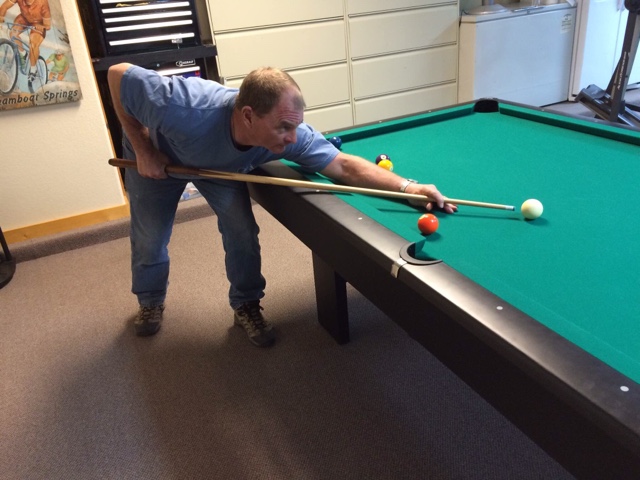 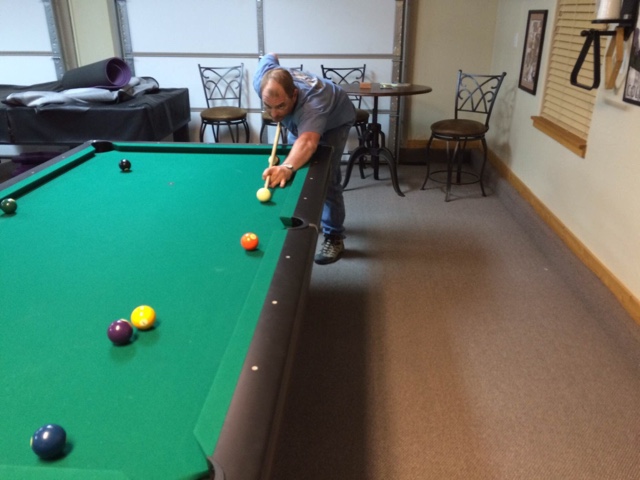 The evening, after dinner, went quickly.  Bill asked me if I'd like to play a game of pool or three, which I readily agreed to.  Now, in all fairness, I have to report that Bill claims to be a novice pool player.  Don't believe him.  He's practicing to be as good as Minnesota Fats...  Well, he's not a pro, but he can clear a table, which makes him a heck of a lot better pool player than I am.  No matter.  I had fun and enjoyed talking with Bill and Linda while there.
In the morning, Bill took me back to his work place from which I took off for Canyon, TX.  The morning was cool, blue sky, and a bit of a wind somewhat in my favor still.  Heading to Canyon, I went East to Texico, a town on the New Mexico/Texas border...thus the name.  On day 5, I made it into Texas. 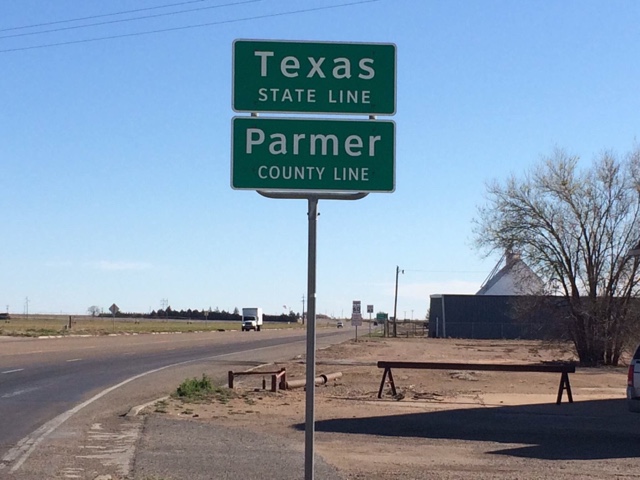 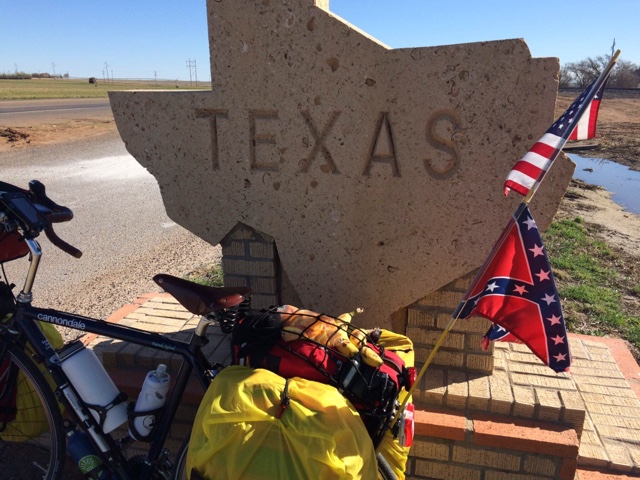 Interestingly, I saw my first police car near the border on the Texas side.  He was like a fisherman having a great day catching big fish...he was stopping drivers left and right, issuing citations, collecting money for the Great State of Texas' coffers.  We waved as we passed each other repeatedly as he would turn around and position himself to catch drivers leaving Texas, headed for New Mexico.  Unfortunately, I didn't have headlights to flash to warn the drivers as they drove along, entering this State Trooper's personal speed trap.  From that point on, I saw no other police cars until I got to Canyon, TX.  The day was going along well...well, until the wind shifted and began to blow more in my face.  If looking straight ahead was 12 o'clock high, the wind was blowing towards me from about 10:00 o'clock.  And it was blowing quite hard.  Sucked.  The good part is that I'd gotten pretty close to Canyon before the wind started to really blow in my direction.  As I sped along around 15mph, I got a bit lazy with my checking the roadbed ahead of me and I hit a fairly large stone, which resulted in a flat tire.  Off came the panniers and the flat was on the rear tire, of course.  Flat tires are required to be on the rear tire.  Murphy's Law.  Got it done and headed off.  Not even 5 minutes down the road...the rear tire was flat again.  I taught myself a new curse word combination while I replaced the tube.  Always try to see the positive in every situation is what I say.  What I noticed this day in particular is how loud traffic is, specifically the sound of the tires on the roadbed.  Fekkin' incredibly loud, deafening really.  We are killing ourselves with noise pollution, I swear.

With the tube replaced, I was off but this time the wind was making me work harder, plus I lost an hour when I crossed into Texas.  By the time I got to Canyon, it was about 7:30pm.  Got some food at a grocery store, headed back to the motel, ate, talked to Eileen, fell asleep.  Early the next morning, I was up and out the door...and I headed for the espresso shop in town.  Generally, I have little faith in small town espresso shops, but, hey, it's worth looking for a good espresso.  Well, I was in for a pleasant surprise...these barristas know what they're doing. 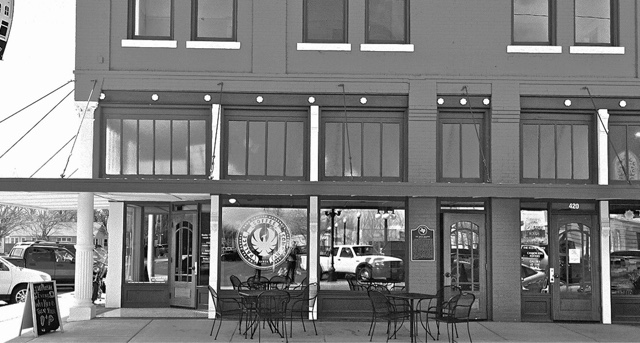 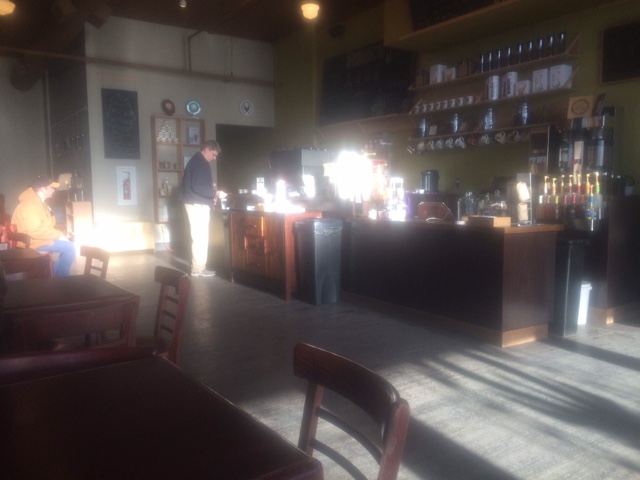 In small, local shops like these, I do leave a tip when purchasing espresso, food, etc.  After drinking my espresso, I was so happy with what I considered a fab double espresso that I went up to the woman who'd made my espresso and gave her a $5 tip.  And told her that, in my travels, it was exceptionally hard to find a good espresso and that the one she'd made for me was exceptional and I wanted her to thank, for me, whoever had trained her because they were good.  She was taken aback for a moment, then a big smile appeared, I shook her hand, then turned and headed out the door.  If you're ever in Canyon, TX, do stop in.  You'll be glad you did...

Time to exit with a tune...Woody Guthrie doing "Hard Traveling"...http://youtu.be/kfq5b1bppJQ  Hope y'all enjoy it.  Next post...Stinnett, TX, and heading north.

Posted by Patrick Lyford at 7:23 PM