"Sing your death song and die like a hero going home." ~ Tecumseh
As everyone knows who has paid attention to my website, I ended my cross country ride in Little Rock, AR.  Many factors went into that decision, but suffice it to say that the absence of fun on the ride was the key issue.  With that behind me, I'll attempt to finish up my posts about the ride with this one.
After having a ton of fun in Kansas City with my mother-in-law, Marilyn (Maril) Sullivan, I know, I know, this undermines all the mother-in-law jokes, but, hey, I had a good time.  So, Marilyn, where do you think they hid the signposts about the Battle of Westport?  We did have a hard time following the directions to locate those, so we surrendered and I took her to a microbrewery.  Now, Marilyn doesn't really care about the difference between beer and craft beer, nor does she really care about the difference between coffee and espresso.  So, in the video, she shares her thoughts about craft beer or just drinking beer in the afternoon.  Don't let her fool you.  She really had fun...seriously.  Check it out: http://youtu.be/YFpNGPyWEqQ  Here are some photos of the place, too..it's the 75th Street Brewery (http://75thstreet.com/): 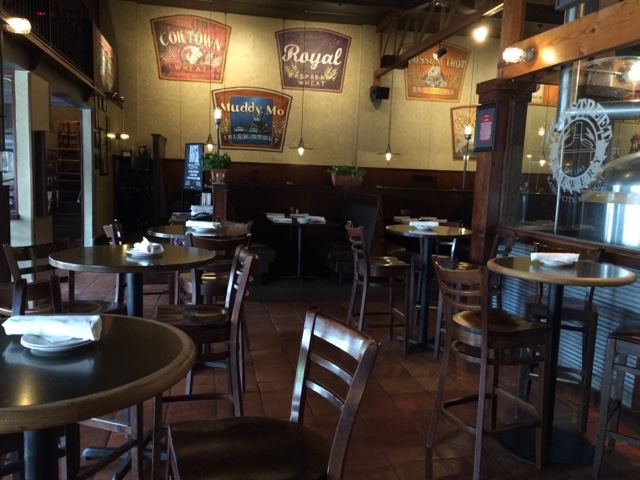 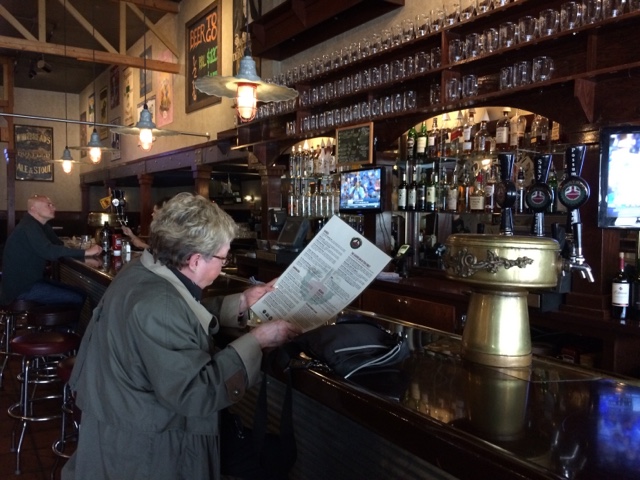 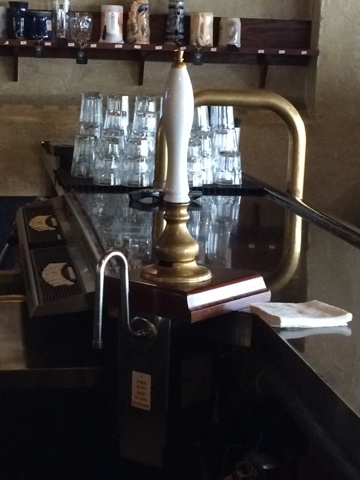 Well, I didn't get her to try the beer...she thought it was too early despite me telling her that it was 10:30pm in Ireland, which should make it ok to have a beer in the U.S. at 3:30pm.  At least, I thought so, which is why I had a stout.  It was a decent stout, but I would have loved to try a few more brews or, at least, the cask condition brew, but they didn't have a cask conditioned brew on tap.  Next time...
Ok, Monday, April 13th, I headed out of Kansas City around 8:15a.m.  The day was overcast and it remained overcast all day.  This was actually a plus despite it being very humid.  On the University of Missouri Kansas City campus, there was a bike path that would take me to a road I'd use to get out of Kansas City, hopefully, without too much traffic.  The bike path, which is really an "activity path" since runners, joggers, walkers, and many others use it, was quite good.  It'd be a good place for Eileen to run when she visits her mom.  Before too long, I was out of the city and back into the countryside of Missouri.  With the wind at my back, the day was going well.  At the point where the road ended that I'd used to get out of Kansas City, I opted to use a larger highway to get to Ft. Scott.  It would be a 90 mile day, so I was looking to make it as easy as I could.  Despite the traffic and the speed limit on Rt. 69, I made good time because these types of highways have large shoulders and, when constructed, they tend to flatten out the hilly countryside, which was a plus since I wanted to get to Ft. Scott.
About 4:30pm, I arrived in Ft. Scott, where I stayed at the Cortland Hotel,  (http://www.courtlandhotel.com/), where I had stayed when I rode across country in 2010.  Ft. Scott was an important site before and during the Civil War to help deal with the cross border fighting between the Jayhawks (against slavery) and the Border Ruffians (pro-slavery), as well as the Confederate Army during the Civil War.  Frank & Cheryl Adamson are the owners and are very friendly people, who run a great hotel with very reasonable prices, too.  A few photos: 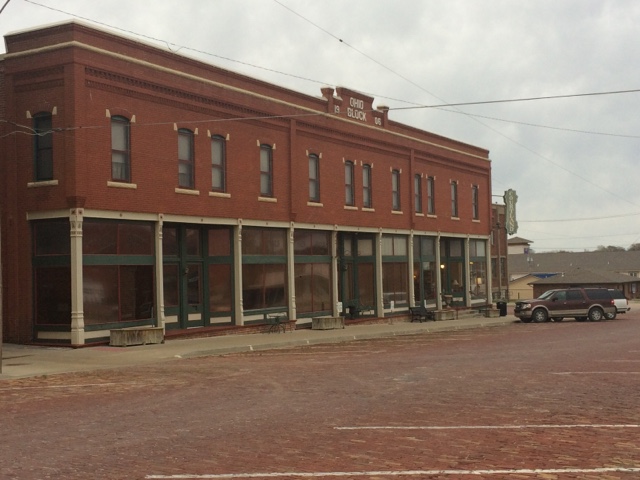 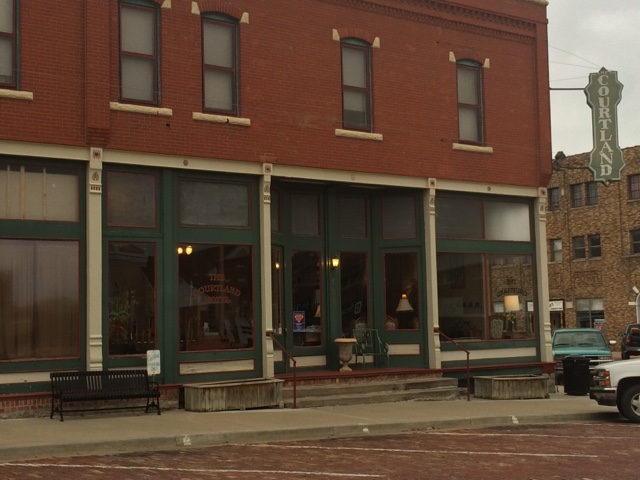 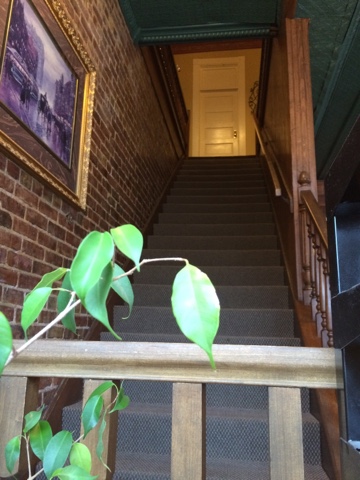 After a week off and just finishing 90 miles, these 25 stairs were a bit daunting...! 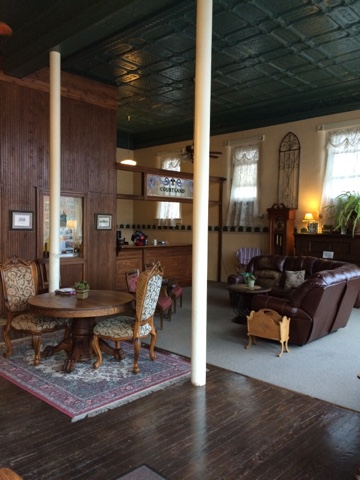 Ft. Scott has a great little downtown area that, unfortunately has many empty storefronts, which is not unusual for these towns.  Hard times economically but still thriving in their own right.  The Fort is a tourist destination and there is much more to the town of Ft. Scott than just the downtown area. 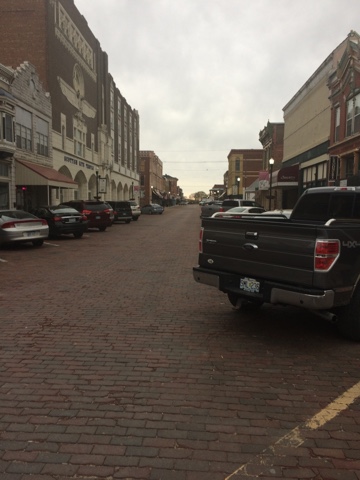 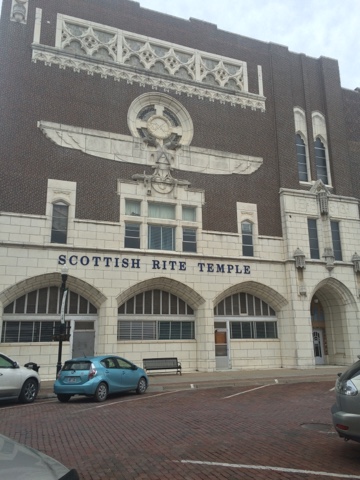 I really liked the architectural style of this building.  It was right next to the espresso shop that I went to in Ft. Scott.  Common Grounds.  Like most espresso shops, theirs tend to be "Americanized"...espressos made bigger to appeal to Americans who always like things bigger.  In every espresso shop I've gone to, the barista will say s/he knows what a ristretto shot is, but, unfortunately, they don't.  Neither did this shop's barista.  The other barista at least had the confused look on her face when I asked her that told me she did not...so, she looked at the guy standing next to her.  He said he did, but he really didn't.  It was decent coffee, but not espresso. I stayed an extra day in Ft. Scott to reorganize my route.  This was the second time in a week that I wanted to "reorganize", which was not a good sign.  Once I realized what was up, I knew it was time to call this ride to a halt.  But, I enjoyed my day off...A few more photos: 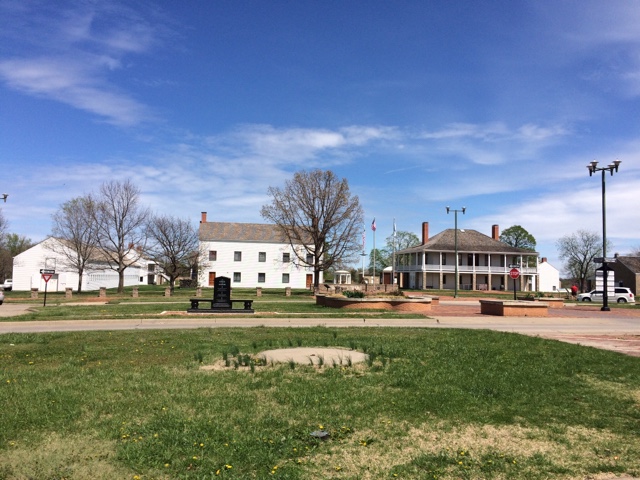 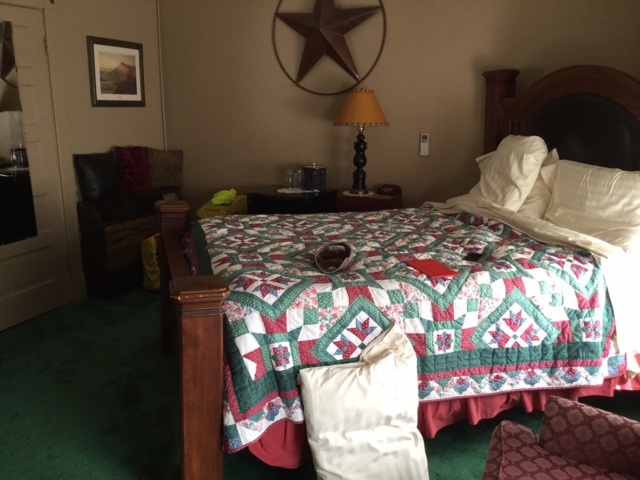 A very comfortable room and bed... 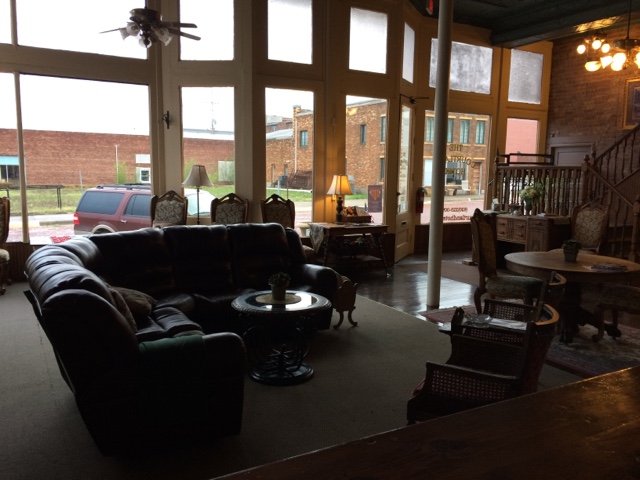 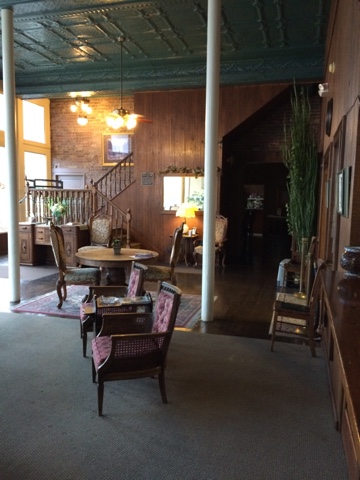 Another view of the staricase...
On Wednesday, April 15th (tax day), I headed off to Neosho, MO, via Joplin, MO.  Now, Joplin was on my brain because that city had been hit by a tornado in 2011 that did some very serious damage to the city.  And I was going to be riding through Joplin this day.  What I didn't realize was that I was also going to be riding on Rt. 66, (http://en.m.wikipedia.org/wiki/U.S._Route_66), a.k.a, Will Rogers Highway, The Mother Road or The Main Street of America.  Some photos: 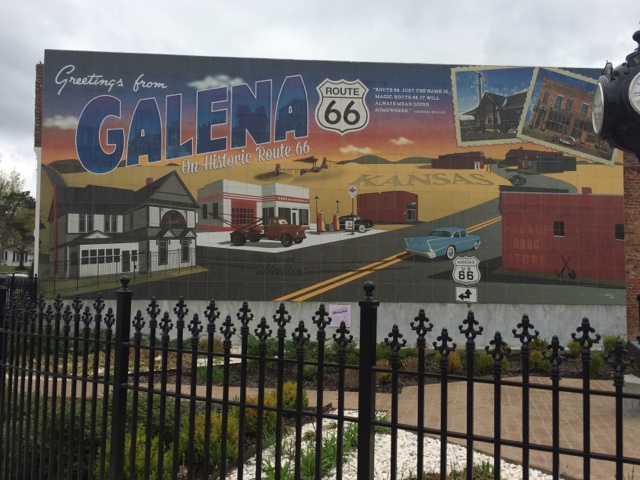 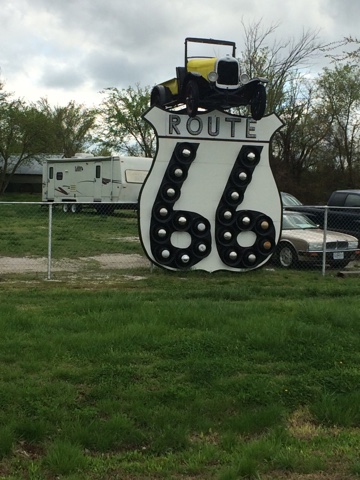 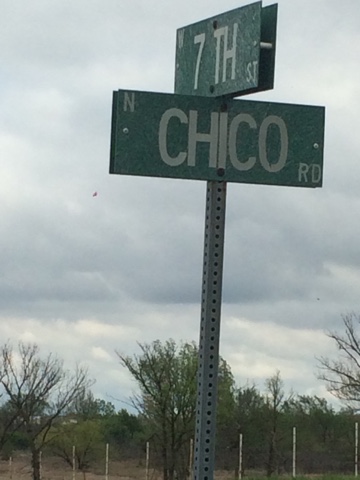 Took this for my college roommate, Bob Roisman, whose nickname was Chico... 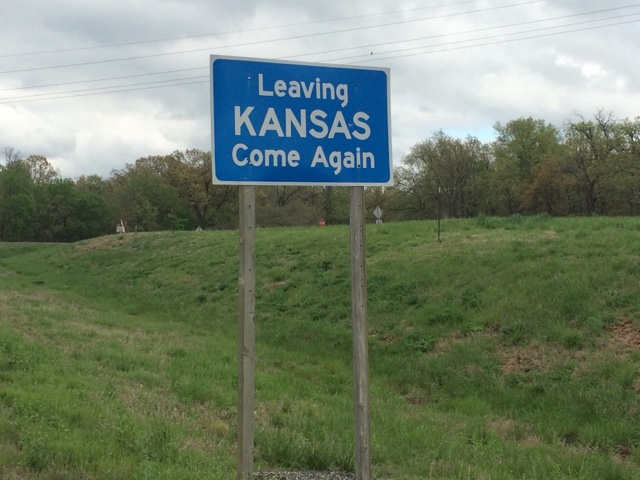 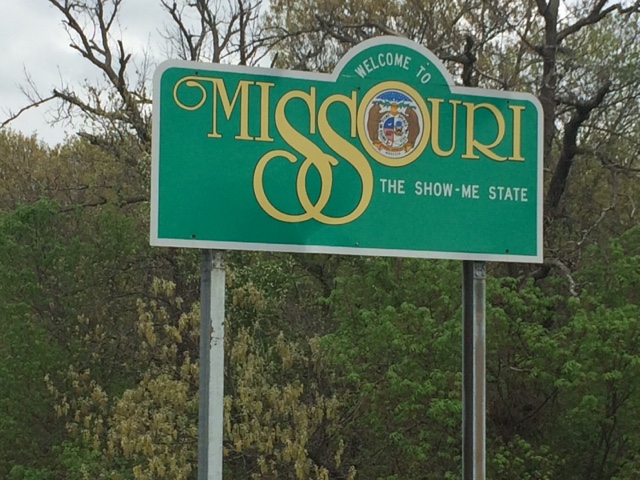 Well, I made it through Joplin without being tossed about by a tornado.  It was a sunny day, actually, and I headed south to Neosho, MO, where I'd spend the night.  From Joplin to Neosho, the road got very hilly.  Lots of rollers and I was not going to get into Neosho before dark, which was extremely frustrating since it would mean a short night and back on the road again tomorrow.  Many curse words later, I made it into Neosho and was not a plesant person to be around.  The only food nearby was a crappy local burger chain, but it was calories.  So, enough said about that since I'm trying to keep this clean.
In fact, for now, I'm going to end this post.  Recently, several singers have died whose songs were part of my high school experience..."Louie, Louie" and "Stand By Me".  So, in their memory, here are the two songs.  Hope you enjoy them nearly as much as I do...
Louie, Louie...http://youtu.be/4V1p1dM3snQ
Stand By Me...http://youtu.be/MX5sLLCrVdA
And here is a photo I found online..notice the name on the rear rack...