"The best thing about the future is that it comes only one day at a time." ~ Abraham Lincoln
I've been up to my elbows in the things that I do as a retiree, so, while it may not seem much to someone else, it has kept me busy enough to not have done this post sooner. What the hell. Now, it's time to do it. A few weeks ago, give or take, Barb and Bill Bochner arrived at our house. They're from around San Francisco, in Marin County. On this trip, they're riding the Adventure Cycling Association's Southern Tier Route from San Diego, CA, to San Augustine, FL. Good time of the year to do it, particularly with the weird weather bringing on the warm weather a tad sooner than expected. Even without the warm weather, it's still a good time to do the ride. Minimizes the bugs, mosquitos, etc., that come with doing this route in the later Spring weather.
So, Barb and Bill. They're retired lawyers. Yes, I know all the lawyer jokes but decided to go with a Lincoln quote instead. They contacted me way in advance, which helps immensely since there is a major sketchy area of no internet/cellular connection as riders approach Silver City. With this advance notice, I was able to give them some helpful advice on how to get to Silver City. No matter which way you head towards Silver City, you have to climb...either coming out of Safford or heading up from Lordsburg. Or coming from Las Cruces. These folks contacted me early, so I could give them some tips on riding to Silver City.
Some photos: 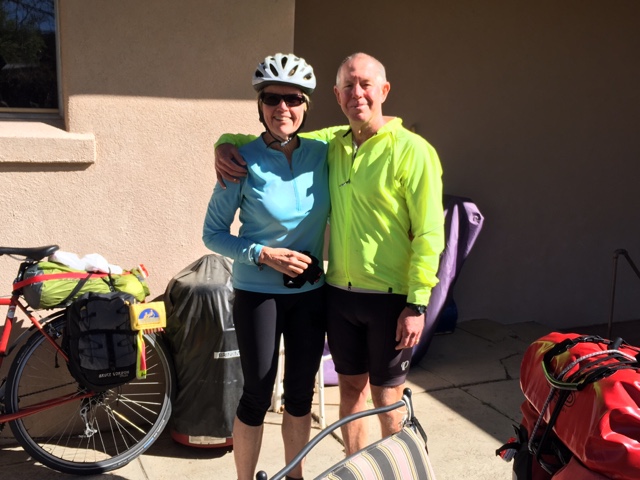 Barb and Bill getting ready to leave for the Mimbres. 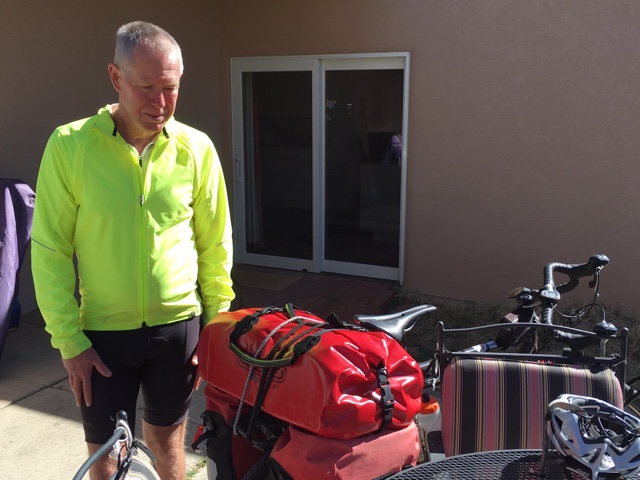 Bill deciding whether he really wants to leave. 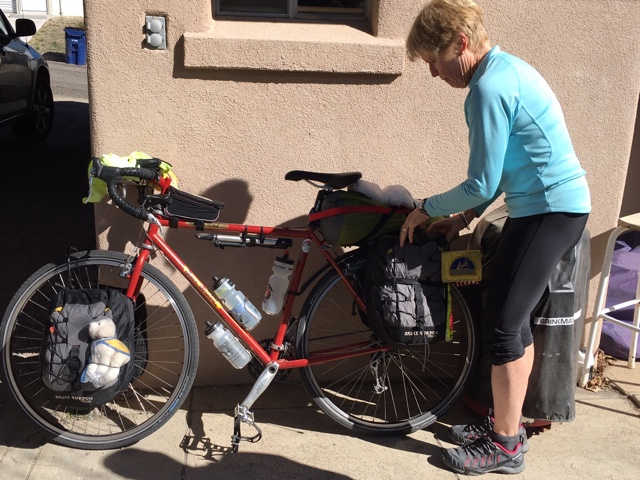 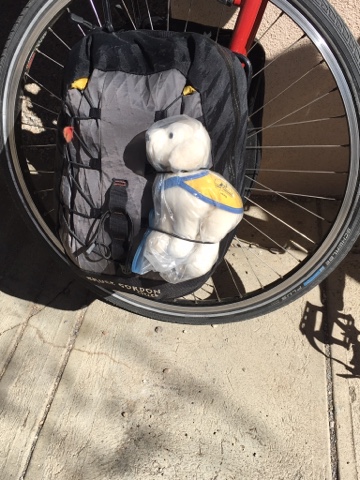 Traveler set for the ride. 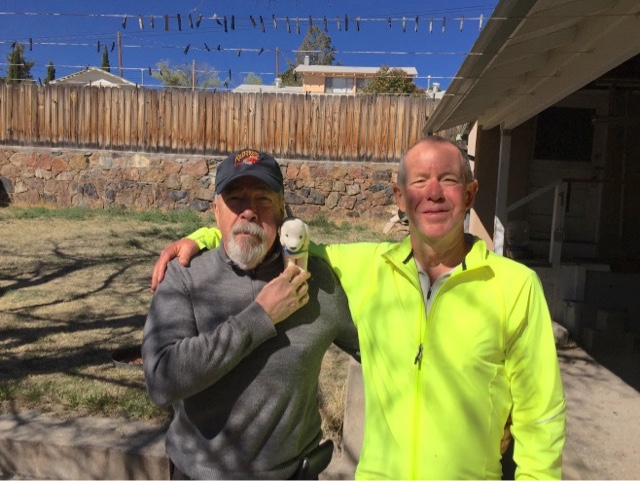 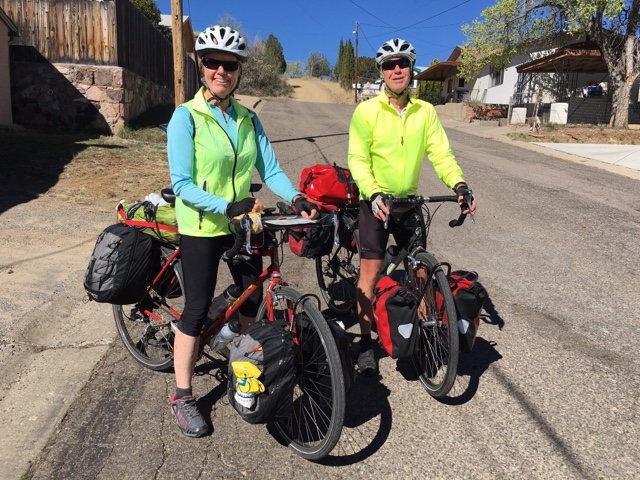 Barb and Bill all set to leave.
We enjoyed having these folks stay with us. I drove out to meet up with them on Rt. 90 and found them near the Continental Divide, where they had stopped for lunch. The climb from Lordsburg was a bit more daunting than they'd expected. Living around here, I have a different perspective on riding in the mountains, which makes it difficult to give anyone else advice on what to expect. Drivers are terrible with their advice to people traveling by bicycle and those people who ride bikes are not great either. How strong a rider is, where they ride most often, age, type of bike, etc., all factors that affect how a person perceives whether something is difficult or whether the climbs are hard. This combines to make giving advice sketchy, in my opinion. I offered to carry some of their gear to help make the ride easier, but, like true gluttons for punishment that a lot of cyclists are, they opted to carry on and not "cheat". I understand...unfortunately...since understanding makes me one of those gluttons, too. So, I left them to their bike riding and checked back later in the day. At that time, they were just a few miles from our house...and they arrived soon. After showers, some talking, a beer or two, then dinner, we sat around and chatted. Good company and then off to bed early, which I can also relate to.
They're much better at maintaining a blog of their travels than I am...you can catch up on what they're up to at: Pedaling Puppy Raisers (https://pedalingpuppyraisers.wordpress.com/2016/03/30/day-33-austin-city-limits/). They help raise puppies for people who need a companion. Plus, they help welcome home soldiers from the quagmire of the Middle East. Admirable.
The next morning, Barb and Bill got off to a good start after breakfast and good weather for a ride over Emory Pass. Barb rides a Bruce Gordon Rock'n Road touring bike (http://www.bgcycles.com/new-page-81-1/). Sweet bike. Barb likes it a lot. I still have my mind set on a custom road bike. For touring, I think something like the Rock'n Road is very good.
Ok, one lawyer joke...I have to:
How many lawyer jokes are there? Only three. The rest are true stories.
Alright, got that out of my system. As an Irishman, not telling a joke is bad for my health. Sort of like constipation...it hurts until it's out of your system! Now, you know why the Irish live on this little island all by themselves. Can't help myself..here's one more:
As the lawyer awoke from surgery, he asked, "Why are the blinds drawn?". The nurse answered, "There's a fire across the street and we didn't want you to think you had died."
Time to get this post online, so here comes a tune. What should I use? Let's see..."Fields of Gold" by Sean Keane, (http://youtu.be/Ol7h4WgWx0U), an Irishman, a great singer, and someone that Eileen and I saw/heard at a session in Louisburgh when we were there in 2013. What an incredible, effortless singer! These folks have already arrived at, and left, Austin, TX, so they still have a few days to go to get out of Texas. Happy trails! You're always welcome back for a longer stay in Silver City!
Posted by Patrick Lyford at 8:16 PM