"There is, incidentally, no way to talk about cats that enables one to come off as a sane person." ~ Dan Greenberg

"In ancient times, cats were worshiped as gods; they have not forgotten this." ~ Terry Pratchett

Like the start of 2017, this year, 2018, has started out with the death of a great friend. Furry, yes. Frustrating, yes. Lovable, quite. My friend, yes. One that I love/d dearly and for whom I still cry. His name was/is Earl. His buddy, Scrappy, died last January/2017. They were/are my best friends. To humans, I can be a best friend, a good friend, a colleague, a jerk, a total asshole, and, for some, there is the wonder of what the fuck is that person doing in the human race. To Scrappy and Earl, I was the best thing since canned salmon.

How do animals become such an integral part of our lives? I don't have an answer, but I loved Earl completely. He never asked much of me...water, food, and a warm place to sleep. Oh, and no water on him, please! He hated to get wet. Not sure why people think they have to bathe a cat. They take good care of themselves and their cohort.

Last June, Eileen and I moved to Los Alamos, NM, which has been an adjustment in itself, and we brought Earl with us. I struggled with the decision to bring Earl to Los Alamos. He grew up in the neighborhood where we lived in Silver City and had some buddies...Missy Grey, Missy Black (sisters), and Scrappy. Scrappy was the boss cat. Although Scrappy had died and Earl was the new boss (same as the old boss), he and the other two cats were still together. Missy Grey and Missy Black were healthier than Earl and Scrappy...had all their teeth, good fur, good hunters, etc. I thought, selfishly perhaps, that Earl would have a difficult time adjusting without me there. When I rode my bicyle across country in 2010, Eileen told me that he constantly walked through the house looking for me. So, Earl came with us. I made arrangements with the neighbors to take care of Missy Grey and Missy Black. A little side note: last November, Eileen and I went to Silver City to see friends and to eat at 1zero6, a restaurant that our friend, Jake, owns. While there, I stopped by our house to make sure all was well. Missy Grey was by the back wall, near the wood fence between our house and the neighbor's. She meowed loud and mournfully for over 45 minutes. I was shocked. Finally, she came out and slowly came up to me to let me pet her and, finally, to pick her up. I regretted not taking her with us back in June/2017, but it didn't seem fair to take them out of that environment.

Well, the main plus for bringing Earl with us was that he was well cared for here and not out in the elements. I took him to the local veternarian and had many tests done to see what was causing his weight loss. It was the same thing that had happened to Scrappy. All the blood tests were normal, but Earl continued to lose weight. Finally, around Christmas, he was emaciated, but still eating, drinking, and pooping/peeing. I chose to not put him down since he didn't appear to be in great distress. Yes, he was getting weaker by the day, but not in great pain. With Scrappy, we took him to the veternarian and had him killed. Yes, I know, the vernacular is "putting him down", but the reality is that you're having someone kill him with chemicals. It was painful to experience and I was determined to do that to Earl only if he was in great pain or discomfort. He continued to eat, drink, and poop/pee until his last day, which was Friday, January 12, 2018. I had lunch with my friend, Neil, and, on returning home, found Earl sleeping on his rug. He stayed there throughout the afternoon and evening. Around 10pm, he meowed a couple of times, so I picked him up, wrapped in his rug, and held him in my lap with my arms wrapped, as lovingly as I could, around him. At 11pm, I realized that he was dead. His head flopped a bit too loosely, which let me know he had gone on.

These guys, as well as Missy Grey, were quite the team. They ruled the part of the neighborhood where we lived in Silver City, NM. They hung out and defended their turf from all comers, with scars to prove it. The birds, rabbits, mice, lizards, and other living critters, including grasshoppers, had to be on their guard at all times. Our neighbors loved the cats since they kept the mice population under control. My fondest wish is that Scappy has found Earl and that the two of them are once again hanging out with each other with great enjoyment.

Here are some photos to show y'all what Earl looked like, along with some of him and Scrappy, as well as Missy Grey, so you can see how affectionate they were with each other. And how, fortunately, they cared for me. 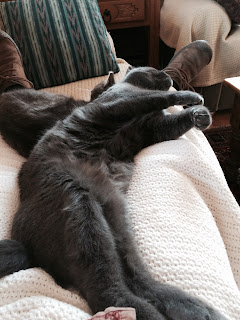 Earl sleeping in his favorite place... 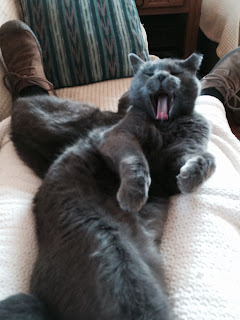 A big yawn from the big guy... 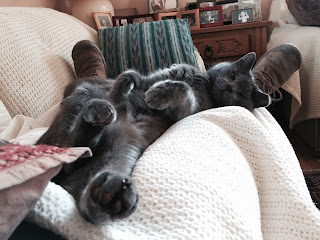 A big kitten at heart... 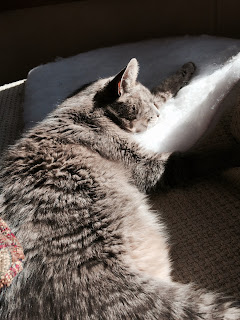 Scrappy sleeping in the sun... 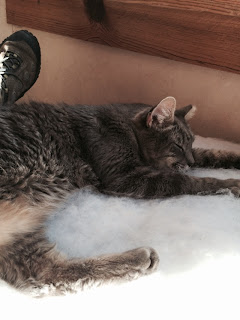 Scrappy sleeping on the purr pad...

While these friends are not here with me any longer, they will always be my best friends and I will love them completely...and hope to see them somewhere down the road. Until then, here's a tune that I posted on Scrappy's post: Memories from Cats Thanks for choosing me to hang out with...