Good Friends, Cake, And Does She Wear Underwear?

Last weekend, for the Silver City Clay Festival, Nancy Pawlowski and her husband, Jerry Rabinowitz, came to Silver City, NM, from Del Ray, FL, so that Nancy could do her 3D clay class at the Town of Silver City Library for the local kids.

Nancy and Jerry have been friends of ours for many years and Nancy was the matron of honor at our wedding.  My nephew, John Busteed, was my best man, and, to add a bit of spice to things as the wedding ceremony was getting under way, just before we started walking towards my friend, Bob Bohanske, who married us, I whispered in my nephew's ear, "Nancy doesn't wear any underwear."  I think it unsettled him just a tad.  Nancy is a very good looking woman.  So, with that thought securely planted in my nephew's mind, Eileen and I got married!  Too funny...  Now, to be honest, I really don't know if Nancy wasn't wearing any underwear that day, or now, for that matter.  We like her no matter what she wears or doesn't wear as long as it's not a GOP button showing support for any re"THUG"lican.  Yes, it's true, I'm a Democrat and I support Barack Obama...and the Affordable Health Care Act.

After Nancy and Jerry left Silver City to head up to Northern New Mexico, they stayed in Albuquerque, NM, with some mutual friends, Ricc and Sue.  While there, Jerry had to go to UNM Hospital ER via ambulance due to dehydration/altitude sickness.  Having lived in Florida the past decade or so, he lost his adjustment to altitude and dry climate.  Thankfully, he's doing better and they headed north to Taos, NM, for a few days before heading back to Florida.

Some photos of Jerry, Nancy, Eileen and her violin...Jerry is a professional photographer, primarily shooting architectural photos, but he does other photography, too.  He shot photos of our wedding, as did our friend, John Fleming, the Scottish Canadian friend of ours.  While here, Jerry wanted to shoot some photos of Eileen with her violin and some of the violin.  Here they are in no particular order... 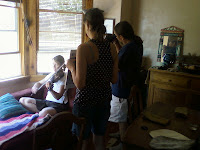 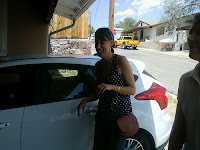 This next photo is of a cake that Tre Rosat restaurant made for the Silver City Clay Festival reception that was held at Syzygy Tile Works in Silver City on Thursday, Aug. 2, 2012.

Ok, a tune to go with...Bonnie Raittff, one of my favorites.  Great singer, great stage presence, and what pipes she got from her father, John Raitt.  Enjoy...

Posted by Patrick Lyford at 1:49 PM