I must admit that living in Silver City has provided me with many opportunities to see a variety of unusual people, animals, and "things".  "Things" is the catch-all category.  This past weekend was the first annual Silver City Clay Festival and, from what I could gather, it was a smashing success.  Congrats to Lee Gruber, co-owner of Syzygy Tile with her husband, David del Junco a.k.a. "Mr. Hunk" for short, for pulling off a great festival that ran about as smoothly as I've ever seen a first of anything run.  The festival falls under the "things" category.  Never been to, or volunteered for, a clay festival before.  So, another first for me.

As for unusual people, I think the last "unusual" person was Giorgio Alessi, the cyclist from Italy that I met last week (see previous post).  He does Ultraman triathlon athletic events that require all contestants to have successfully completed an Ironman event.  Incredible...a 6.2 mile open ocean swim, 261.4 mile cross country bicycle ride, 52.4 mile ultra-marathon run.  He also does "double decker" ultraman triathlons and is planning a "triple decker" ultraman triathlon.  These are versions where the distances are doubled and tripled, as you can guess.

Now, today, two more unusual events.  One, my Shimano Ultegra chain broke.  Two, as I'm sitting here typing for this post, a goat went walking by the house.  A domestic goat, yes, but a goat... something I've not seen before in the neighborhood.  In fact, I've never seen one in any neighborhood I've ever lived in.  Period.

The chain...it was two years old but I didn't think it was too worn.  I was headed up 6th Street hill near our house and I was almost to the top when the chain broke.  Fortunately, I was not standing up on the pedals, but was seated and I was able to unclip and prevent myself from falling over.  Took the Vitus to Gila Hike & Bike, showed Bill and Martyn, the wrenches.  Bill, after seeing how the chain broke, put his two index fingers together to make a cross and held it out towards me and called me "Sir".  Said it took a lot of torque to break the chain in the way it broke.  I bowed and told him he was too kind.  Then smiled.  Then frowned.  Damn, I'll probably need a new chain.  Bill checked out the chain and it was close enough to being worn to the point of replacing it.  Well, got the new chain.  Will do a ride with Eileen in the a.m. then off to a follow-up meeting re: the Silver City Clay Festival.

A photo of the broken chain...a little blurry but you can see how the link broke.
The goat was a domestic goat, with a rope and something metal attached to the end of the rope.  Headed out the front door to see if I could head it off and tie it up at our house until whoever owned it came looking for it.  Hmm, what if it tries to ram me with its horns?  Got to be cautious.  While going through the neighbor's yard across the street, it got the rope caught in some bushes, but it got away before I could get to it,  The goat took off again, obviously not keen on me catching up with it.  So, away it went...up 6th Street hill.  Hope its chain didn't break going up that hill.

A photo of a similar looking goat: 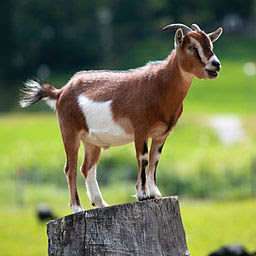 Ok, on the goat note, time to go for a tune..."Stand By Me" by John Lennon.  Never heard him do this one before.  It's dedicated to my new Shimano Ultegra 10spd chain.

Posted by Patrick Lyford at 2:31 PM