JENNY, JOSH AND THE GDMBR...PLUS COLD WEATHER, RAIN, AND MUD

The past week in New Mexico, particularly around Silver City, NM, the weather turned cooler, even cold (to us anyways), and wet.  Last Sunday was the first time, since the beginning of summer, that nighttime temps dropped below 60 degrees.  Daytime temps were also cooler, sometimes hovering in the 70's.  Afternoons often brought thunderheads and rain.  In fact, on Saturday, Sept. 7th, during the 2012 Pickamania Festival, (here's a very short article plus some photos from the festival), in the morning, it was raining, which soon stopped but the overcast sky and cool weather continued throughout the day.  Not since 2006 do I remember an overcast sky that lasted all day.  Actually wore jeans that day to the festival.  Most often, the mornings are blue skies, sunshine, with thunderheads developing by early afternoon, soon followed by thunder, lightning, and rain.  By late afternoon or early evening, the rain generally stops with the skies turning clear blue once again.

So, how does that relate to Jenny and Josh?  These two, Jenny Martin and Josh Schmidt, who reside in Bellingham, WA, (where it rains a lot) have been riding the Great Divide Mountain Bike Route since July 7th, I believe. 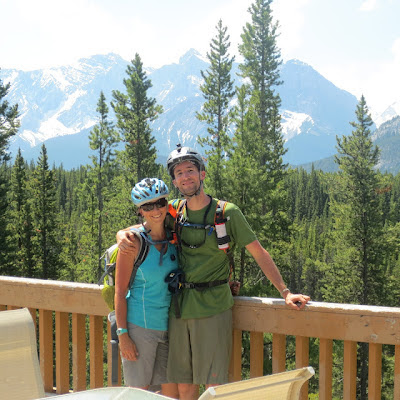 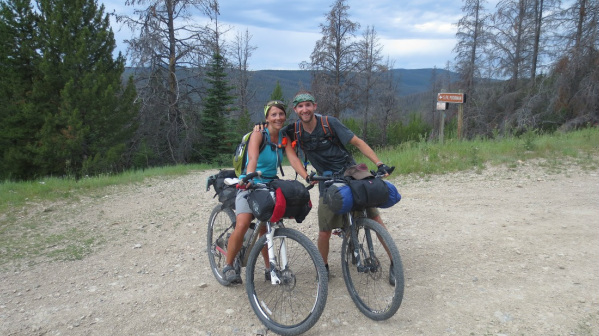 They've now joined the ranks of an elite group, long distance cyclists.  Actually, they belong to a sub-group, long distance mountain bike cyclists.  Often lost on those who don't ride, but very much understood by those who do, riding the Great Divide is a challenge unto itself.  Check out their blog, Losing The Divide, and read up on their adventures with running out of food, water, and encountering TOO much rain, cold and MUD!  But, in the midst of their joy, fun, and travails, they've discovered things about themselves, as all long distance cyclists do, and they're happy and thankful for the opportunities.  Like people they've encountered ...and times shared with other cyclists they've met along the route.  Human touch, kindness, and fraternity, along with those people asking you, "Why are you doing this?"...and not really understanding your quest.  Jenny and Josh are also raising funds, asking for a penny a mile, to help the Max Higbie Center in Bellingham, WA, buy adaptive cycles for those with developmental disabilities who aren't able to ride a regular bicycle.  These can cost anywhere from $1500 to $3000 EACH.  So, should you be so inclined, it's a good cause.  All the money goes to buying bikes, not administrative costs.

One rider they met, Gen Shimizu, is riding a UNICYCLE..yes, one of those one wheeled cycles.  He is from North Carolina and is raising money in a fight against human trafficking.  Gen also has a blog detailing his adventures on the GDMBR.  Gen also owns a company that makes lightweight tents and gear, YAMA Mountain Gear.

Of course, human beings being human beings..a mountain bicycle race along the Great Divide Route was established several years ago, as well...check out this story on the Great Divide Mountain Bike Race from Bicycling magazine.  The ones who do this race are certifiably crazy!  But, as riders of the wheel, we understand what they do and why they do it.  Like any group, there are fringe elements!

Jenny contacted me about a week ago, asking if she, Josh, and Gen might be able to spend a night with us.  Spoke to Eileen (fed her a beer first...) and she said she was fine with that.  Well, referring back to the start of this post...this past week was cold and wet in New Mexico, particularly the Gila Wilderness area that they were coming through to get to Silver City.  In the Black Range mountains, about 30 miles northeast of Silver City, about 1" of snow fell, too.  Riding through lots of mud, and more mud, from Pie Town, NM, through the wilderness, eventually landed Josh and Jenny at Lake Roberts, NM, on Thursday night, too late and too dark to go further safely.  With no cell phone coverage in that area, or most of the wilderness, they weren't able to contact us, but I figured they'd be late considering the distance they had to travel and the weather.  Even with the muck, they managed 100 miles that day to Lake Roberts.  Truly a great cycling feat.

So, on Friday morning, I got a text from Jenny indicating they were on their way into Silver City and were presently in Pinos Altos, NM, thus the cell phone coverage.  Initially, they were going to head out of town after having issues taken care of that had developed with their bikes.  I got on my bike and headed out to meet them, catching up with them on the road from Pinos Altos to Silver City (Rt. 15).  We chatted for a while, then I took them to Gila Hike & Bike to see what they needed done with the bikes.  Dave Baker was the wrench that day and he was able to get started on their bikes, so I headed to our house and got the car.  Headed back to Gila Hike & Bike and picked up Jenny and Josh, took them back to the house, unloaded their stuff from the car..then fed them spaghetti/meatballs, salad, espresso, and ice cream to take care of the hunger.  That may have convinced them to stay the night, which they did, to our pleasure.  These two are easy to be with.  The next morning, after they'd had a chance to assess where they were, where they needed to be, they opted to stay another night.  They'd been in contact with another Warmshowers.org host in Silver City who was willing to put them up Saturday night.  I told Jenny that wasn't necessary, although it was courteous of them to make arrangements, and that we'd be happy to have them spend another night with Eileen and me, if they'd be able to tolerate more of the food, ice cream, beer, wine, and espressos.  Jenny thought they'd be able to do that.  LOL...just kidding.  We went to the Farmer's Market, then to the co-op, then to the post office, then to the bike shops...my Cannondale was getting the finishing touches done by Annie at Twin Sisters (more on that in another post)...then back to the house so Jenny and Josh could get done what needed to be done in order for them to head out today for Antelope Wells, NM, on the Mexico border. A 124 mile ride.

With all the goodies we got at the farmer's market and the co-op, we made a great curry shrimp dish with potatoes and salad on the side...plus beer and wine.  Of course, we stayed up too late so their night's sleep was shorter than they'd anticipated, but, hey, they're young...they can do that stuff.  I got up this morning at 0500, cooked some bacon and eggs, while they consumed some granola and yogurt, then they dug into the eggs/bacon while I made them two Americanos to help motivate them this morning.  They headed out around 0630 and I headed back to bed.  Slept in until after 1100, which was great.  By the time Eileen and I were eating breakfast, Jenny and Josh had been on the road for 5hrs or more.  From this point forward, the weather should be great for them.  Wind can always be an issue, but having the sun, warm temps, blue sky...what more could one ask for?  After Antelope Wells, they're headed to Tucson, AZ, where they'll hook up with a friend of Jenny's and then take the train back to Seattle, WA, on Sept. 25th, then on to home in Bellingham, WA.

Right now, I'm extremely pissed off.  The Samsung video/still camera that I have has once again not recorded the videos correctly.  I know.  I know.  Operator error.  In this case, I'm not certain.  In my mind, I know that a setting or something has to be wrong and it's creating video with Donald Duck voices.  Whatever is the cause, I have no video of Jenny/Josh and their stay at our house, which royally pisses me off.  I will work with the camera and read the manual.  If it continues, it's going to get sold.  Soon.

At least I can get a good tune to exit this post with...it doesn't come from Samsung.  So, here's one for Jenny and Josh...Slainte!  Randal Bays on guitar.  Randal is from Seattle and is a fine traditional Irish fiddler and guitarist...and a joy to listen to.  "Ny Kirree Fo Sniaghtey" performed by Randal Bays...and some of those other Irish musicians.

Posted by Patrick Lyford at 4:15 PM