SWEET Ride Today On The Cannondale...

This morning, I headed out on my first 20 mile ride on the revamped Cannondale.  I could not ask for more. Well, maybe more money.  But not for the bike.  It handled really well, felt very comfortable, and I was able to keep a decent pace.  Don't know exactly what the pace was because I haven't mounted a bike computer on it yet.  This weekend, I will put the Planet Bike Protege 9.0 wireless computer on it.  Here's a photo of the computer: 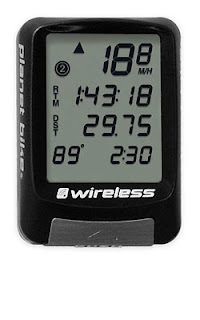 I like it for several reasons...I can read speed, ride time, distance, temp (which on any bike computer is completely inaccurate), and time.  Other screens have average speed/max speed and total mileage.  Simple and relatively easy to use.  It is BIG, which is a negative, but I like the screen.  Will get a small bicycle computer for the Vitus.

Today's ride was down Rt. 90 past Tyrone, NM, and was about 20 miles with approximately 7 miles of climbing.  On my way back, I met a cyclist, Trey, who was on the Great Divide Mountain Bike Route with Josh and Jenny (see previous post on them) and Gen, the uni-cyclist.  Trey thought that Gen had finished the ride to the Mexico border and was back in Silver City with his parents.  Trey was in Silver City the past three nights, two at the local Motel 6 and one night at the "Bike House"...Jamie Thompson's place, which is another story all its own.  Jamie has raced the Great Divide at least once in the past few years.  He's an accomplished cyclist.  Anyways, Trey will be heading to Phoenix via the AZT, the Arizona Trail, which will take him near Tucson.  He will reconnect with Josh and Jenny before they head back home to Bellingham, WA.  Trey is presently living in Washington state, too, with his sister.  He's originally from New Hampshire.  Stratford, I believe is where he said he grew up.  He's been in contact with some guys who run a bike shop in Sierra Vista, AZ, and will be staying with them when he gets there.  Then he'll connect up with the AZT and head to Phoenix to meet up with his brother.  While I never got to meet Gen, the uni-cyclist, I enjoyed meeting the other three riders...Jenny, Josh, and Trey.

Suffice it to say that today was a good day on the bike.  Most days on the bike are like that.  So, here's a tune to exit with...enjoy.  Oscar Peterson Trio doing, "You Look Good To Me"...for the Cannondale.

Posted by Patrick Lyford at 5:24 PM