Cateye used to be my bicycle computer of choice until I became utterly frustrated with their computers.  As a result of this mounting aggravation, the last one I had, the Adventure, was smashed to smithereens, gleefully, by me...here's the post about that "adventure".  In the Spring of 2013, Cateye is releasing a new, GPS version of their bicycle computers..the Stealth 10 and the Stealth 50.   Initially, in the Fall, when I first saw a review of these, I thought I was going to have to break my solemn pledge to never buy another Cateye product.

Between then and just before Christmas, my nephew, John, who lives in Catonsville, MD, and, like me, is a pretty avid bicyclist, and I were talking about a GPS based bicycle computer that did the basics.  And did them well.  John was making some strong statements about the Garmin, which he liked quite a bit.  While John is more into some of the offbeat or older styled bike accessories and older styled new bikes, for keeping track of where he is, how far he's gone, how fast he's cycling, etc., he's even more of a techy geek than me.  For Christmas, he sent me the Garmin Edge 200.  A basic unit that does everything I want and more.  And, it's not a Cateye.  Hooray!  While I liked the new offering from Cateye, I noted the control button/s are on top like the rest of their products, which have been a sore point with me.  Frequently, when I was stopped on my bike, I'd lean forward and inevitably hit that button and change up something on the computer.  With the Garmin, they're on the sides of the unit.  Liked it better already.

This was an unexpected Christmas present from John.  And, if memory serves, it's the second bike-related one that I've gotten from him.  The first one was the Brooks Team Professional pre-softened saddle, which was good to go right out of the box.  I have it mounted on my Vitus road bike.  In 2010, I used it on my Cannondale ST-800 that I rode 3100 miles on across country.  What a joy!  Extremely comfortable.  Like Porsche, there is no substitute for a Brooks.  Go for the best or pick something from the rest.  Now, the test was about to start...firing up the Garmin Edge 200.  Would there be difficulties that only product engineers can make happen?  You know, those kinds of problems that send people into a tailspin.  Well, they do me.  Like with Cateye, I do believe there are people, with good intentions, of course, who are hired by companies to "improve" their products.  What this usually translates into is that what was once pretty simple to use is now the "new and improved" product.  Only it has taken on new proportions, functions, and dimensions that make violence against the product understandable.

Happily, the Garmin Edge 200 was a breeze to set up.  Easiest one ever, really.  Surprised me.  Pleasantly.  I was prepared for those inevitable "difficulties".  No tire size to enter.  No sensor to mount on the front wheel.  Sort of a 1, 2, 3 kind of setup process.  Much more accurate mileage and elevation totals.  Easy to read screen with multiple data pieces visible.  And a backlight.  To read a much more in-depth, detailed review of the Garmin Edge 200, check this one out at DC Rainmaker.  Caution: While this guy does a superb job of going over all the details about the Edge 200, along with photos of everything included in the box, it's a DETAILED review, which I like.  You can skip around the page and check out all the photos he has on the blog, etc., so you're not hampered by the lengthy review.  He gives it a thumbs up, although, as a triathlete, he prefers Garmins with more functions.  Like my nephew, however, I just like to ride.  I don't go out to beat my previous time on a course.  Enjoyment is the reason I ride.  Not speed.  But, I do like to go downhill fast.  :-)))  Just so you don't have to go to that page to see what it looks like, here's a photo from the DC Rainmaker blog:

Simple, stylish, easy to use, some pretty good basic functions, buttons on the SIDES, and more.  I don't need one that tells me where to turn right, left, go straight, etc.  I just want to know how far I've cycled, what time is it, and how long have I been riding.

CAVEAT:  The Garmin Edge 200 doesn't show the TIME while cycling.  This is something that Garmin should fix.  Having a visible clock along with the other data pieces is basic.  Yes, you can switch to a screen where the clock is visible, but you need to be able to see like a hawk.  Tiny font.  It should, at the very least, be part of the data pieces that scroll along the bottom of the screen.  Why they left this out is a surprise to me.  It's not a deal killer for me, but it might annoy some.

With the Garmin Edge 200, I can download a ride I've plotted on MapMyRide.com and load it in the Garmin Edge 200.  The device will keep track of the downloaded ride and show me how much of the ride I've completed.  A great little plus, IMHO.  These Garmins are data storage devices, too...think of a functional thumb drive.  While MapMyRide.com can be a bit frustrating in its own right, I do use it and will use it more with the Garmin despite, like a lot of sites, it wants everyone to upgrade to the version that costs money.  Also, any ride that has been uploaded to the Garminconnect.com can also be used in the same way.

While I've not been out on either of my bikes to try this out, I am impressed, so far.  Registering/signing up at the Garmin Connect site was also very easy.  The weather has been getting warmer, so I may very well get to try it out this weekend.  I also purchased a K Edge Garmin mount that can be used on either of my bikes.  A photo, so you can see what it looks like: 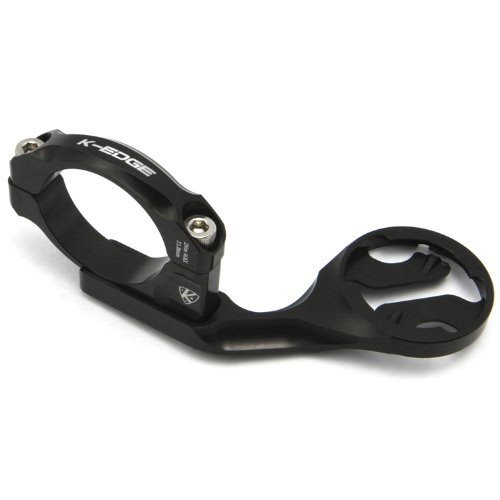 My purchase of this mount is not an indictment of the mounts that come with the Garmin Edge 200.  DC Rainmaker states his mounts seem to be indestructible, to date.  What I liked about this mount is that it places the Garmin out in front of the handlebars, so I can see it better.  On my Cannondale, it's mounted so that it isn't in the way of my handlebar bag.  Very good product design.  Very easy to mount.

So, again, thanks to my nephew, John.  I'll think of you every time I use the Garmin Edge 200.

Time to head out.  So, a tune for your enjoyment, I hope.  Bobby Darin doing "Beyond The Sea".  One of my favorites.  This tune was a follow up to his "Mack the Knife" hit song, which was one of my Mom's all time favorites.  He was destined to surpass Frank Sinatra.  It was not meant to be.  As a child, he suffered numerous bouts with rheumatic fever that damaged his heart.  He died as a result of complications from heart surgery in 1973 at the age of 37 in Los Angeles.  A true loss.  Hope you like it..
Posted by Patrick Lyford at 5:09 PM