MARK BAKER...Touring Cyclist And Ukulele Player. Who Knew That Combination Of Skills Even Existed?

"One of the things that I love about being a ukulele player is that no matter where I go in the world to play, the audience has such low expectations.  It's a huge plus for sure."  ~unknown

Ok, funny part #1, ukulele.  When Mark contacted me via email on Warmshowers.org, he mentioned that he had previously lived on Whidbey Island (where Eileen just spent a week in August at Cascadia Irish Music Week, a traditional Irish fiddle camp put on by Randal Bays, as a participant/instructor with her fiddle) but that now he and his wife, Peggy, lived in Sun City, AZ, he was heading out on the ACA Southern Tier Route, AND that he played ukulele.  I spoke to Eileen about him and asked if she was ok with him staying at our house as he rode the Southern Tier Route that would bring him to Silver City the first part of September. Whidbey Island?  Very cool...  Ukulele player?  Jesus save us!  No, she didn't really say that about Mark or his ukulele.  I swear she didn't.  But I could tell that "ukulele" didn't move her, y'know?  I thought her reaction was funny because, Randal Bays, a traditional Irish fiddle mentor of hers, suggested she get a ukulele to practice on.  Why?  She'd have to tell you that because I don't remember the reason.  Hopefully, it wasn't a gentle attempt on his part to get her to switch to another instrument!  No, he wouldn't do that.  I mean, he hired her and another friend this year to teach intro to traditional Irish fiddle at his traditional Irish music camp on Whidbey Island, eh?  This is all relevant for this post because Mark Baker is the Director of the Sun City AZ Ukulele Club and his ukulele was coming with him across country...and Eileen said he could stay at our house.

Funny part #2, my attempt to find Mark out on the highway last Sunday.  Eileen had gone for a hike.  I was making some adjustments to the Vitus, my road bike.  After she got back, the clouds had formed and were spitting rain.  Decided to go find Mark and see if he'd like me to bring him to our house in the car.  Riding in the rain, getting wet doing that, yes, it's a one of those rites of passage, but, hey, a ride in a vehicle and get dry, plus get to a beer or glass of wine quicker?  Screw the rite of passage.  I'll do it later.  The funny part...I went all the way to Blackjack Campground, 65 miles from our house, and didn't see him.  And it was seriously raining along the way.  At Blackjack, I turned around, headed home...met up with Mark 5 miles from our house.  Son of a ...!  Had to laugh, y'know?  Apparently, I missed him when he went to pee somewhere along the way.  Oh, well...I put his panniers in the car and lightened his load, so the last 5 miles would be easy ones.

Mark turned out to be one of those guests who made an impression quickly.  Loved his sense of humor, his quick adjustment to our house, and his conversations.  All add up to fun, eh?  Then the moment of truth...Mark went and got his ukulele!  Don't know what prompted that, but I think it was my asking him what kind of work he did.  Said he'd been an entertainer for many years.  Played guitar, did lots of folk songs...John Denver, Harry Chapin, Dan Fogelberg, etc.  Been many years since he's done that for a living, but, after he and Peggy moved to Sun City, AZ, he started up a ukulele club.  Mark started in playing some songs and telling stories of his travels while performing.  The best part?  He was good.  We enjoyed his singing/playing and his humor while performing for us.

Ok, funny part #3...rain.  While Mark and Eileen were doing some music together after dinner, I told Mark that he was welcome to spend another night, if he'd like to.  He decided to.  I think he and Eileen enjoyed playing music together.  Must have.  She agreed to have Mark stay another night.  Next morning, Mark took care of some things, bought a SPOT GPS Messenger at Gila Hike & Bike to take with him and ordered a Road ID.  Made his wife, Peggy, happy.  Next day, Monday, Eileen comes home for lunch and let's us know that there's an 80% chance of rain on Tuesday.  Now, that truly sucks.  So, Mark and I start yakking.  Tell you what, Mark, I need a toilet and I have to go to Lowe's in Las Cruces, NM.  We made a deal.  I got my toilet; he got a ride to Las Cruces and avoided the rain.

So, funny part #4.  Any time I get to Las Cruces, I go to Milagro Coffee y Espresso on University Avenue.  For a city of 100,000 population plus, Las Cruces has very little to offer.  Sad but true.  New Mexico State University, Coas Books, High Desert Brewing, and Milagro Coffee y Espresso are the best it has to offer, IMHO.  Wish it was different, but it's not, so traveling there is only for things we need not for entertainment.  Anyways, Mark and I head in for some espresso and bagels and to do some logistics...where is Mark staying in Las Cruces?  I head to the bathroom to pee, Mark went to the men's room after I came out.  On his way in, he spots a poster on a bulletin board outside the men's room.  No, not an offer for sex, but a ukulele group is getting together that night!  Mark asked me, "Is it Tuesday?".  A common affliction of touring cyclists is not knowing what day of the week it is.  Later, we also don't know what town we're in either.  Yes, it's Tuesday.  He shows me the poster.  After he comes out of the bathroom, he calls the number listed on the poster.  After chatting and telling the woman he's speaking with (who was meeting with a group of ukulele players at the time!) that, no, he's not homeless and that he's a ukulele player who's cycling across the U.S. and is the Director of a ukulele club in Sun City, AZ.  To make a long story short, the woman checked him out online, she called back, she and her husband are cyclists, too, and they put him up for the night.  She's a professor at NMSU and she was heading to NMSU to teach a class and would pick him up after the class at Milagro's.  So, he's got a place to stay, a group of other ukulele players to hang out with, and he can get in out of the rain.  Sweet deal!  Pickin' and a grinnin', eh? 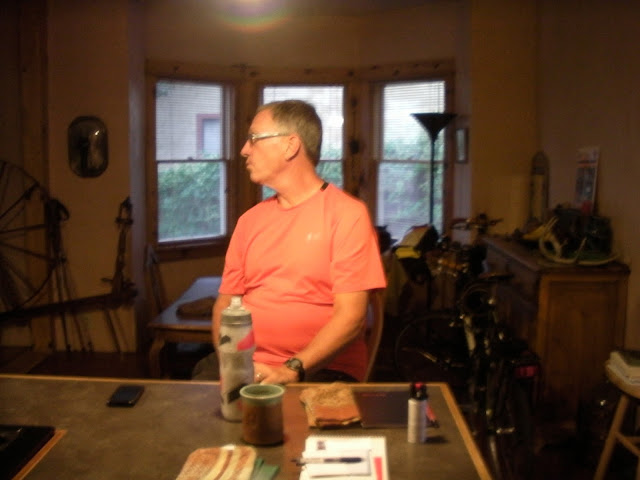 Mark sitting at the counter in the kitchen. He's talking to Eileen.
Here are a few videos....
Guess what I'll pick for a tune for this post?  Yup, a ukulele number.  Not Don Ho....Jake Shimabukuro, a ukulele maestro per Yo-Yo Ma, doing Adele's "Rolling In The Deep".  Followed by Jake doing "Dragon" on his electric ukulele.  Just so you can see the difference.  Safe journeys, Mark.
Posted by Patrick Lyford at 4:39 PM