A Living Wage? Extended Unemployment Benefits? LET THEM EAT CAKE...But Only If They PAY For It!!!

"If you can, help others.  If you cannot do that, at least do not harm them."~ Dali Lama

The Biggest Losers
By Paul Krugman

The pundit consensus seems to be that Republicans lost in the just-concluded budget deal. Overall spending will be a bit higher than the level mandated by the sequester, the straitjacket imposed back in 2011. Meanwhile, Democrats avoided making any concessions on Social Security or Medicare. Call this one for Team D, I guess.

But if Republicans arguably lost this round, the unemployed lost even more: Extended benefits weren't renewed, so 1.3 million workers will be cut off at the end of this month, and many more will see their benefits run out in the months that follow. And if you take a longer perspective — if you look at what has happened since Republicans took control of the House of Representatives in 2010 — what you see is a triumph of anti-government ideology that has had enormously destructive effects on American workers. 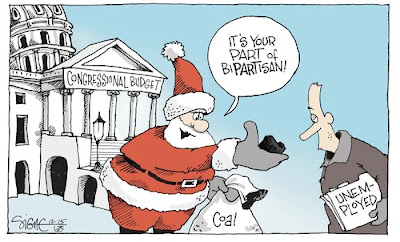 First, some facts about government spending.

One of the truly remarkable things about American political discourse at the end of 2013 is the fixed conviction among many conservatives that the Obama era has been one of enormous growth in government. Where do they think this surge in government spending has taken place? Well, it’s true that one major new program — the Affordable Care Act — is going into effect. But it’s not nearly as big as people imagine. Once Obamacare is fully implemented, the Congressional Budget Office estimates that it will add only about 3 percent to overall federal spending. And, if you ask people ranting about runaway government what other programs they’re talking about, you draw a blank.

Meanwhile, the actual numbers show that over the past three years we've been living through an era of unprecedented government downsizing. Government employment is down sharply; so is total government spending (including state and local governments) adjusted for inflation, which has fallen almost 3 percent since 2010 and around 5 percent per capita.

And when I say unprecedented, I mean just that. We haven’t seen anything like the recent government cutbacks since the 1950s, and probably since the demobilization that followed World War II.

What has been cut? It’s a complex picture, but the most obvious cuts have been in education, infrastructure, research, and conservation. While the Recovery Act (the Obama stimulus) was in effect, the federal government provided significant aid to state and local education. Then the aid went away, and local governments began letting go of hundreds of thousands of teachers.

Meanwhile, public investment fell sharply — so sharply that many observers refer to it as a “collapse” — as state and local governments canceled transportation projects and deferred maintenance. Researchers, like those at the National Institutes of Health, also took large cuts. And there was a major cut in spending on land and water conservation.

There are three things you need to know about these harsh cuts.

First, they were unnecessary. The Washington establishment may have hyperventilated about debt and deficits, but markets have never shown any concern at all about U.S. creditworthiness. In fact, borrowing costs have stayed at near-record lows throughout.

Second, the cuts did huge short-term economic damage. Small-government advocates like to claim that reducing government spending encourages private spending — and when the economy is booming, they have a point. The recent cuts, however, took place at the worst possible moment, the aftermath of a financial crisis. Families were struggling to cope with the debt they had run up during the housing bubble; businesses were reluctant to invest given the weakness of consumer demand. Under these conditions, government cutbacks simply swelled the ranks of the unemployed — and as family incomes fell, so did consumer spending, compounding the damage.

The result was to deepen and prolong America’s jobs crisis. Those cuts in government spending are the main reason we still have high unemployment, more than five years after Lehman Brothers fell.

Finally, if you look at my list of major areas that were cut, you’ll notice that they mainly involve investing in the future. So we aren't just looking at short-term harm, we’re also looking at a long-term degradation of our prospects, reinforced by the corrosive effects of sustained high unemployment.

So, about that budget deal: yes, it was a small victory for Democrats. It was also, possibly, a small step toward political sanity, with some Republicans rejecting, provisionally, the notion that a party controlling neither the White House nor the Senate can nonetheless get whatever it wants through extortion.

But the larger picture is one of years of deeply destructive policy, imposing gratuitous suffering on working Americans. And this deal didn't do much to change that picture.
Posted by Patrick Lyford at 9:25 AM