Heading Out The Door...

"Bicycling is a waste of time.  You're just wearing your legs out giving your ass a ride."
~Seldom Seen Smith in the "Monkey Wrench Gang"

On Friday, March 20, 2015, I did a final check on everything that I was cramming into my Arkel panniers (GT-18 front panniers; GT-54 rear panniers).  After completing that task, I checked my Cannondale touring bicycle out one last time before leaving.  Once done, I began to put it all in our 2006 Toyota RAV4.  Thankfully, it all fit.  I want to know why I can always come up with one more thing that I HAVE to bring along with me until what I have collected would need two bicycles to carry it all.  In the "final check", much was jettisoned, I assure you.  Seeing how much it all weighed (don't ask) and trying it out loaded on the bicyle, I had no problem realizing that some stuff wasn't going to make the trip.

With the RAV4 loaded up, I drove to the library to pick up Eileen and head off to Truth or Consequences, NM, (known to all of New Mexico, fondly, as "T or C") to spend the night at La Paloma Hot Springs and have dinner at Bella Luca.  On the way over Emory Pass to T or C, about 25 miles out of town, I realized that I'd left my contact lenses home. Damn! DAMN! DAMN!!!  So, I made a U turn, but, before heading back home to get my contact lenses, Eileen said, "Wait.  I can mail them to you."  Did I tell you that I love my wife?  She always tone down my knee jerk reactions.  Onward to T or C!!!

La Paloma was just such a great place and a relaxing time for both of us.  Eileen had a tough week and I was experiencing a bit of anxiety.  The hot springs were the magic touch.  Some pics: 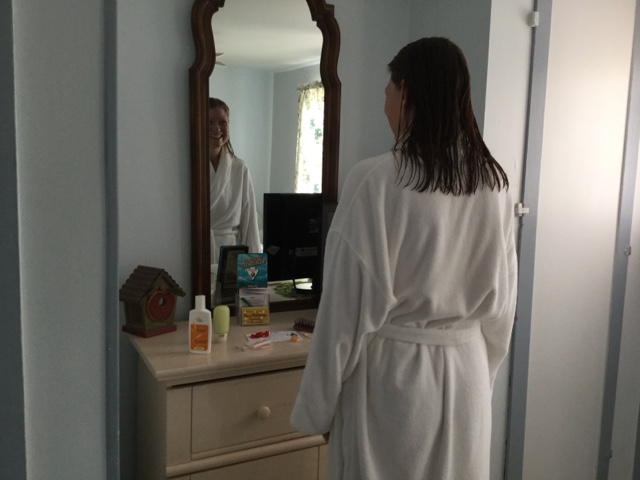 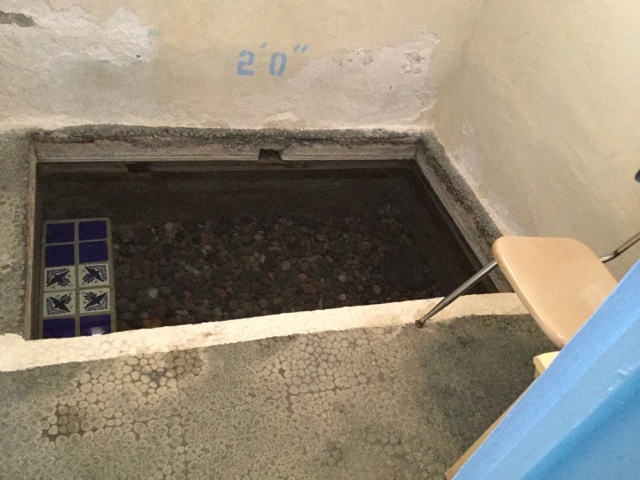 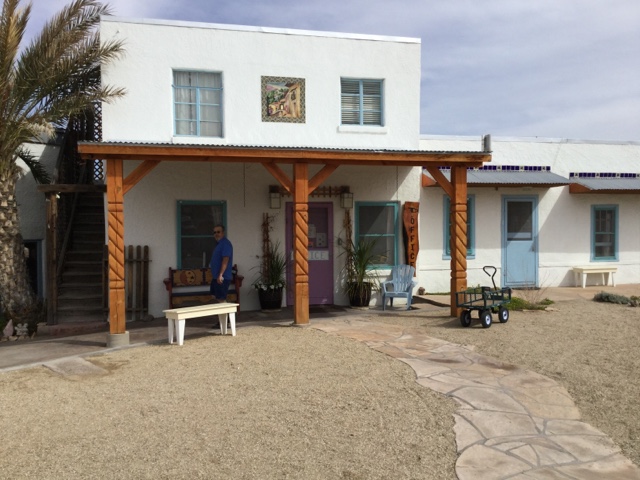 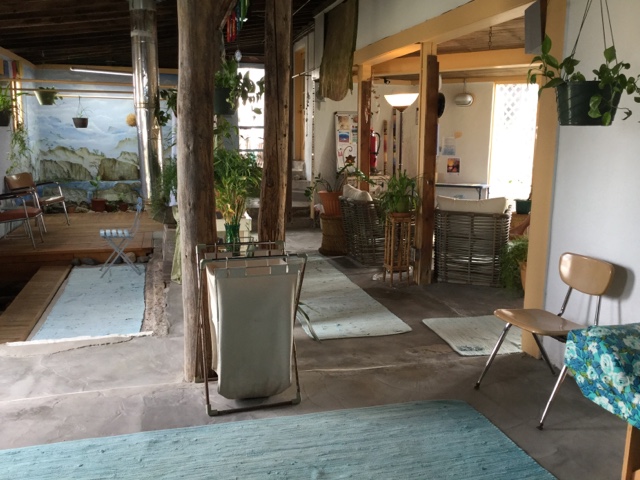 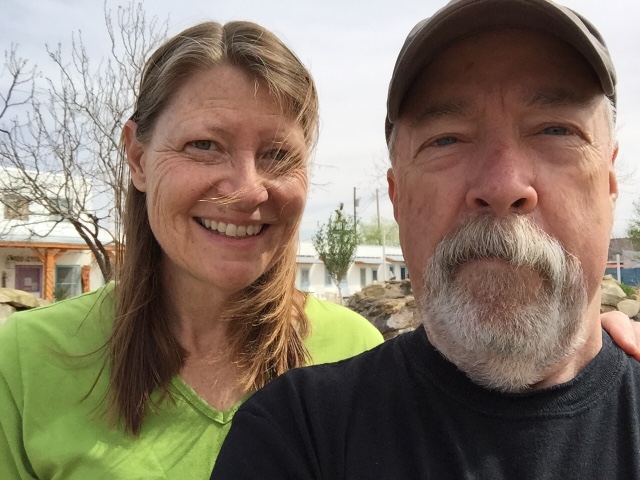 And Bella Luca was all that the hype said it would be.  Cool place, good food, quality wine list, top notch service, and I was with Eileen.  Didn't take photos inside the place.  Yes, I forgot.  But I have a pic of their sign; 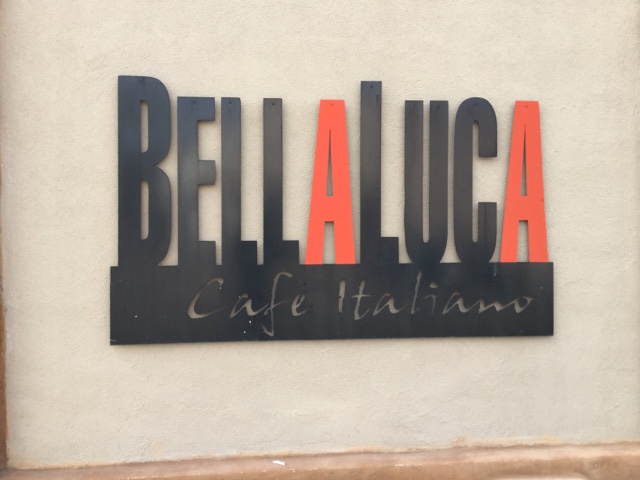 If you're in T or C, for whatever reason, don't miss this place.  Next morning, we headed to Passion Pie Cafe in T or C for coffee and breakfast.  More pics: 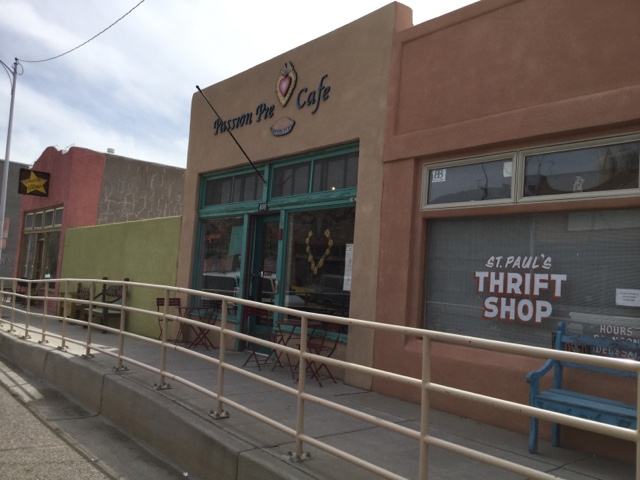 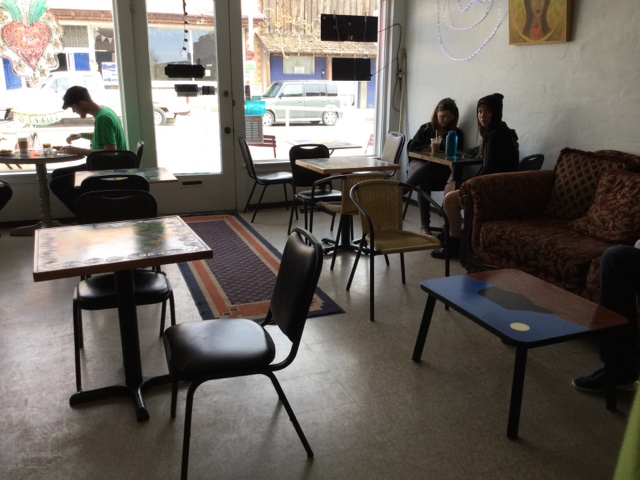 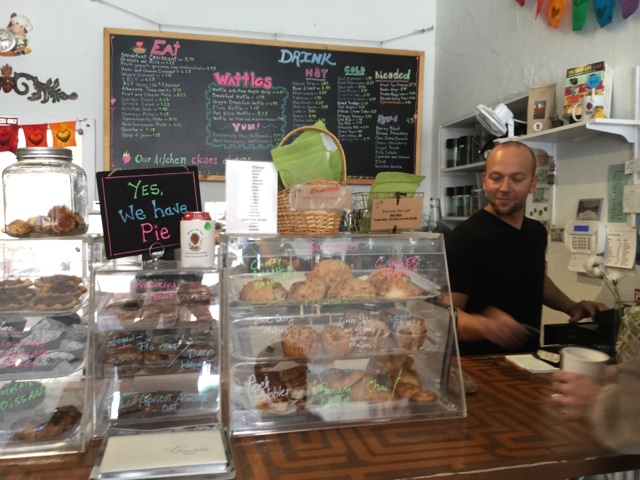 Once filled up with some good food and caffeine, we went north to the Bosque del Apache to see some birds, go to the Visitor Center, hang out a bit.  Met a couple from Santa Fe, who had driven to Socorro, then rode their Ibis tandem to the Bosque for a day's ride, heading back to Santa Fe that afternoon.  The Bosque is another great place in New Mexico that's well worth the time to visit.  For bird watching, hiking, or just driving around the Bosque.  Yes, some pics: 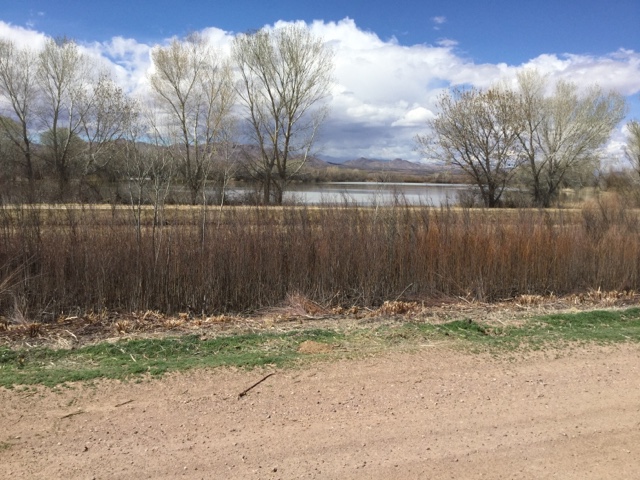 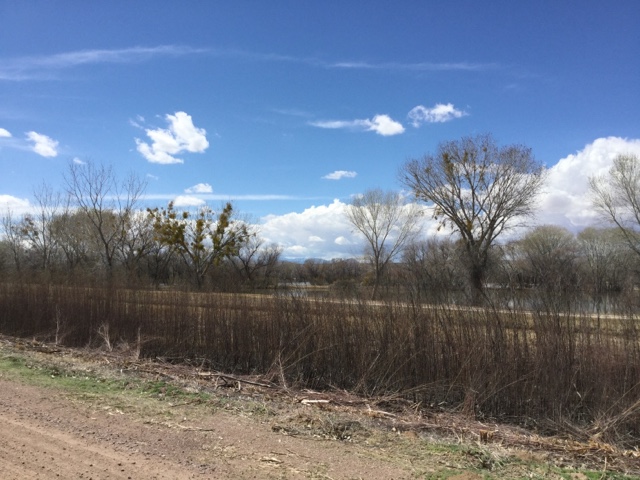 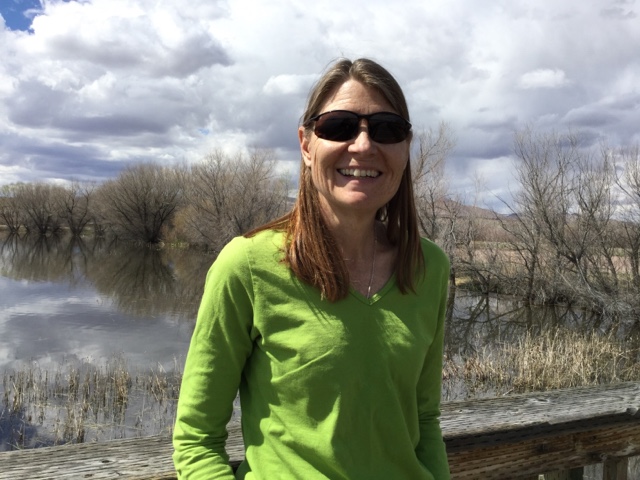 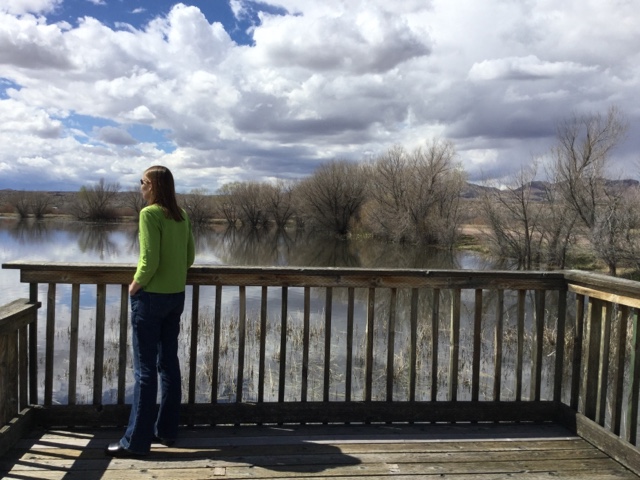 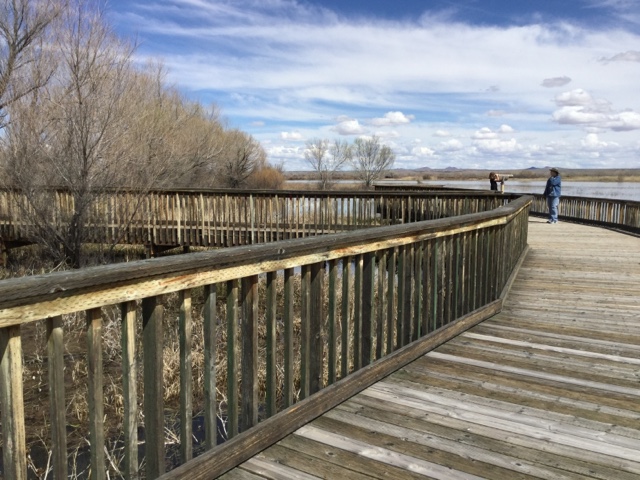 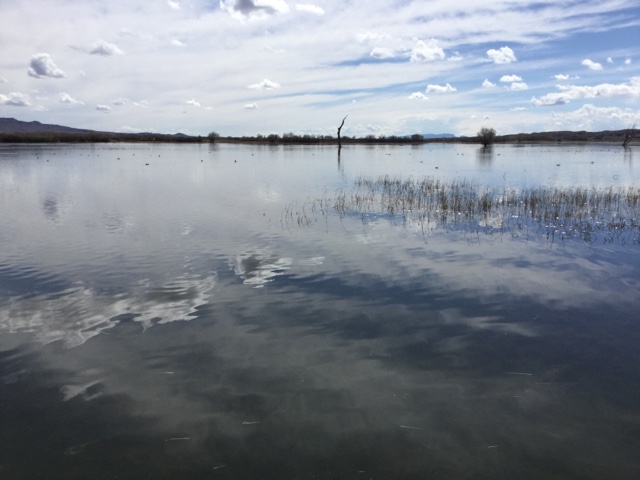 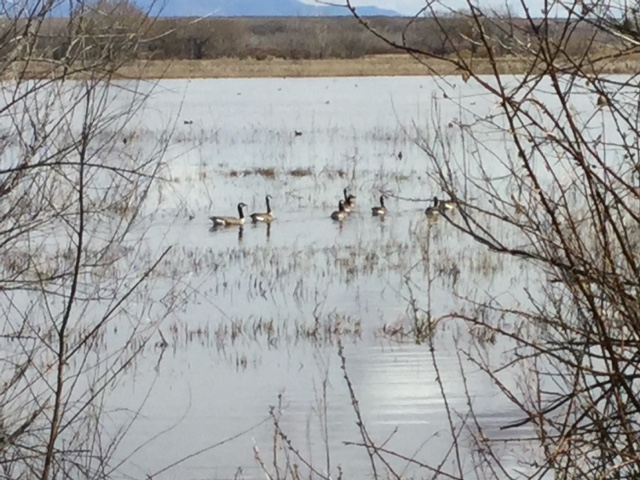 Moving on, we headed north, once again, and checked out Magdalena, NM, which, sadly, is slowly dying.  There are a few businesses, but it's a struggle for them to hold on, I'm sure.  Realizing there wasn't anything open in Magdalena, we headed back to Socorro to the Twisted Chile, the newly opened brewpub there. Casey, the owner/brewmaster, was there.  I recognized him from when the Socorro Springs Brew Pub was in the building that now houses the Twisted Chile.  His sister, Molly, and her husband, had opened Socorro Springs, but had moved the brewing, etc., to Buena Vista, CO, and, according to Casey, they were presently in New Zealand, looking to open a brewpub there.  Fortunately, Casey was on the same page with me in acknowledging that Socorro Springs was not what it used to be.  Nope, didn't get photos.  Casey told us about a small beerfest that was going on in town, so we had a few pints of stout, some pizza, and made our way to the fest.  Picked up a couple of St. Patrick's Day pint glasses, but, alas, no photos.  Now, I have reasons to go back to the Twisted Chile....I need photos!
Next morning, we went to a local coffee shop in Socorro that was about as uninspiring as I've ever experienced.  Not chancing an espresso, I went with the Americano.  Hard to fail on that call.  Eileen's cappucino was not good.  It's difficult to kill a cappucino, in my opinon.  Food was blah.  Oh, well, on to I-25 and Rt. 60.  The morning was absolutely stunning.  Great weather, a wind out of the West, and a blue sky that went on forever.  Once at the intersection, I pulled over and began hauling things out of the RAV4.  Here are some pics: 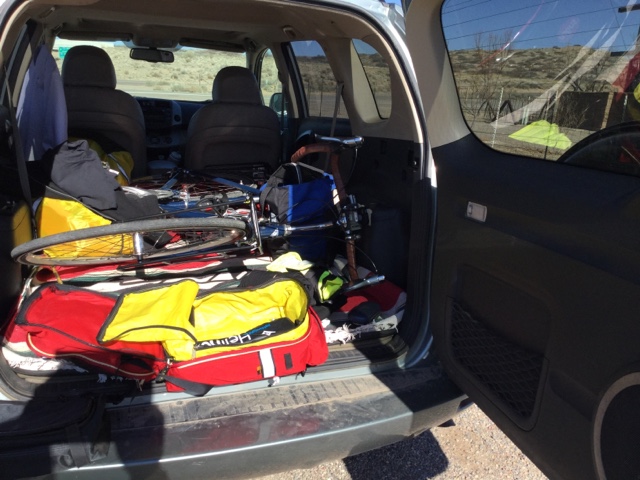 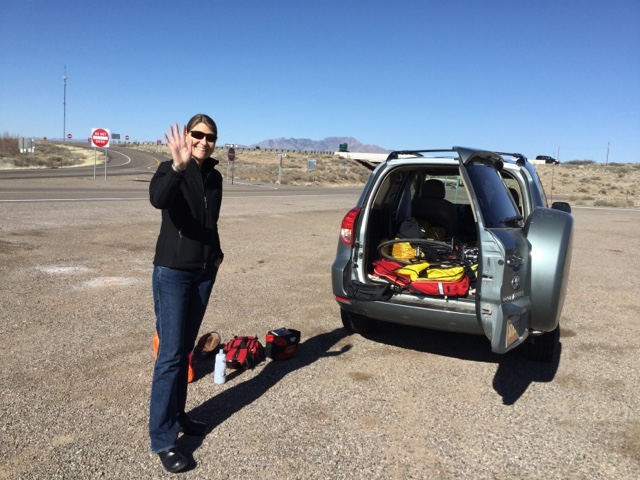 After getting everything out and on the ground, I attached it all to the Cannondale.  My God, it weighs a lot.  Oh, well, I can jettison items when I get to Eileen's Mom's place in Kansas City.  Ok, more pics: 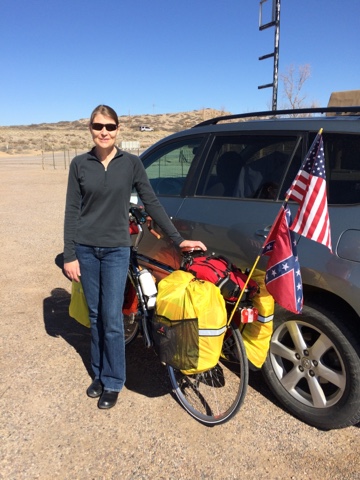 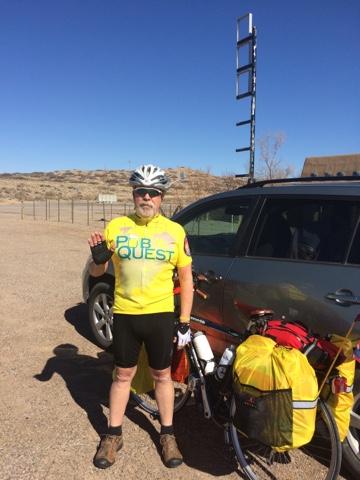 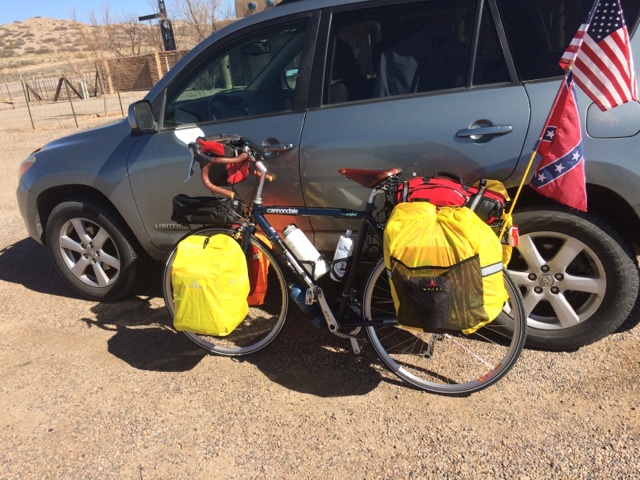 Not much left at this point in time other than to say a very tearful, heartfelt adios to my Eileen.  I was missing her before I swung my leg over the top tube.  Not having her with me is the very hardest part of this trip.  After this is done, the next ones will be with her.  I headed out around 11am on March 22, 2015, for my next adventure.  More on that in my next posting.  For today, it's on to Mountainair, about 40 miles down the road.
What tune to pick to exit this post with???  A hard one to decide on...Johnny Cunningham, one of Eileen's favorites....http://youtu.be/ejIkLESBDXc  Enjoy!
Posted by Patrick Lyford at 8:02 PM