"It ain't as bad as you think.  It will look better in the morning." ~ Colin Powell
The day that I left Ft. Scott, KS, was overcast and not a promising day, weatherwise, but I took off anyways.  I'd redone my route once again while I stayed an extra day in Ft. Scott, but, as you know by now, I'd only been foolin' myself.  The temperature was cool and the wind was tolerable.  Heading to Neosho, I was taking a more direct route to the Ozarks and Eureka Springs.
Now, I'm not certain why I decided to head towards Eureka Springs, AR, but I did.  Growing up in Upstate New York, between the tourist towns of Saratoga Springs, NY, and Lake George, NY, I was absolutely turned off by just about any tourist place, no matter the offerings.  Tourists can be real assholes and living around them for 30 years did not endear them to me...at all.  Every time I'm traveling, I make every effort not to be a "tourist" and try to act like I live where I'm visiting.  Ok, what's worse than tourists?  Their kids.  The "absolute jerk gene" gets passed on to them.  I remember my Dad when he'd be around some kid who was acting out and their parent/s were not dealing with the situation...he'd say that his palm was just itching, itching to give the kid, then the parent, a swat.  That's what I think about when I'm around tourists.
Ok, back on the road to Neosho, MO.  For the most part, the day went well.  No major issues with drivers or dogs.  Soon, I was on Rt. 66, which I thought was different from THE Rt. 66 because it said Kansas Rt. 66.  That's just a glimpse of how normal people can be stupid tourists...duh, there's only ONE Rt. 66, Dude.  So, I come rolling into Galena, MO, when I see this: 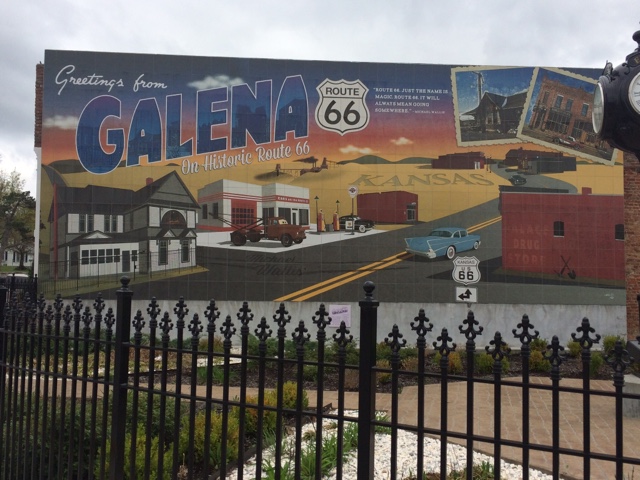 Alright, now I know that I'm on THAT Rt. 66.  This was a cool graphic on the side of a building in Galena.  Adventure Cycling Association just finished mapping their Rt. 66 route (http://www.adventurecycling.org/routes-and-maps/adventure-cycling-route-network/bicycle-route-66/) and people can buy the maps and take the trip on Rt. 66.
Riding from there to Joplin, MO, was next and I admit to being more than just a bit anxious about tornadoes at this point.  Several years ago, Joplin got hit by one big tornado that did lots of damage, including to a hospital there.  Well, my eyes were constantly looking over the horizon, 360 degrees, to make sure that I'd spot any tornado.  Just what the hell I was going to do should said tornado appear was a very different matter.  Being out in the open left me vulnerable to whatever the forces of nature would impose on me.  So, I kept pedalling and no tornadoes.  Getting to Joplin, I began looking for the route to Neosho from there...and missed the turn.  Looking at my map on Ride With GPS, I saw another road that I could take that intersected the highway I wanted to be on.  So, forgetting all I've ever learned about not taking shortcuts (another lesson on how normal people turn into stupid tourists), I took the shortcut.  Just far enough into this shortcut...far enough to know that turning around was going to be just as hard as going forward...I realized that I should have not forgotten why it's not good to take shortcuts.  Rollers. Big fekkin' rollers.  I was in the hill country of Missouri.  At one point, I came upon road construction and a section of dirt road.  Hard packed dirt road, but dirt.  Fortunately, it was just a short stretch of unhappiness, but the rollers continued unabated.  Stopping to see just where the hell I was on this damn road, I saw that the intersection was not far away.  Getting to that intersection brightened my day a bit, but I knew that I was still a ways from getting to Neosho.
Pushing on, I realized that a lot of people sell cars from their homes in Missouri.  They were everywhere.  And churches.  God wants them to have cars so they can drive to church and give the pastors their money, so the pastor can have a nicer house and a much nicer car than any the churchgoers sell back at their homes.
To keep the curse words to a minimum, I'll skip the description of the rest of the ride.  Suffice it to say that I arrived in Neosho after dark, around 8:30pm, pissed off, cursing at Google Maps (I was not saying anything nice to the female voice on Google Maps!), and located the motel where I'd made arrangements to stay.  Of course, the nearest places to eat...all fast food places.  The one place that looked decent just closed, so I had the joyful experience of eating at a local burger chain that was just a notch above terrrible.  After my delicious burger, fries, and milkshake, I walked back to the motel and called Eileen.  If there was a way to get from Neosho back to Silver City the next day, I was up for taking whatever it was and get out of there.  It was the first crack in my determination to continue on this ride.
Well, like the quote at the top of this post, things did look better in the morning, so I was off to Eureka Springs, AR.  More on that later... 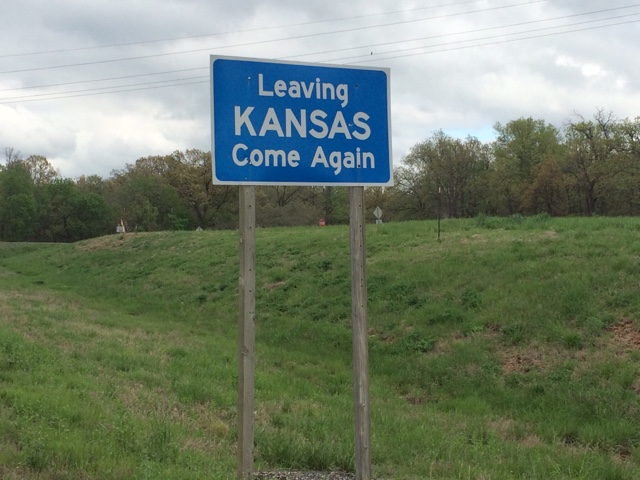 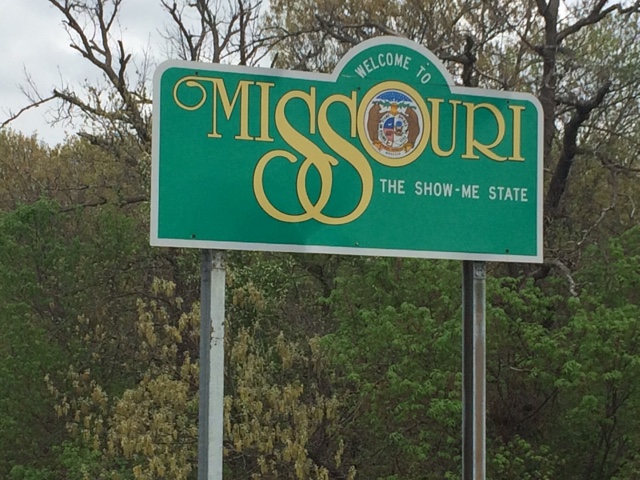 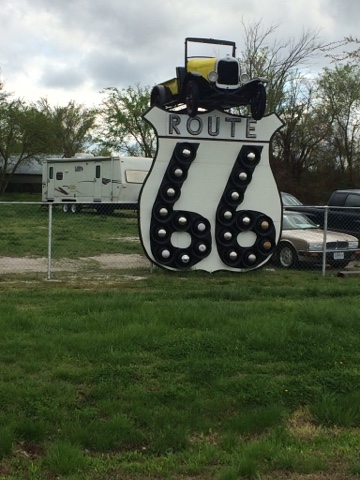 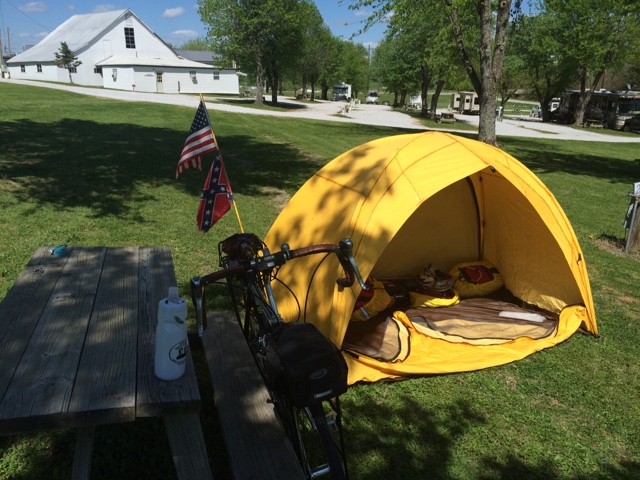 My campsite outside of Harrison, AR 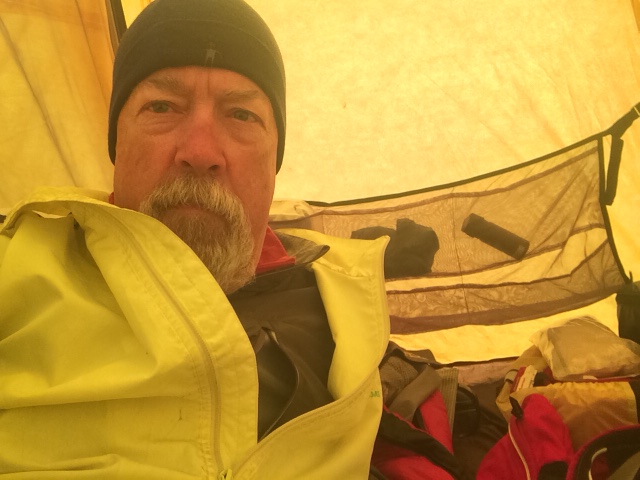 Yes, it was cold, so I was dressed to stay warm.  Sunshine, but cold winds.
Alright, a tune to exit this post...Etta James singing "At Last" (http://youtu.be/S-cbOl96RFM).  A great song and a great singer.  Hope you enjoy it.
Posted by Patrick Lyford at 1:16 PM