On To Little Rock, Then Home To New Mexico!

"You can observe a lot by just watching." ~ Yogi Berra
"Always go to other people's funerals, otherwise they won't come to yours." ~ Yogi Berra
I love Yogi Berra's quotes.  He was such a character.  Ok, I left Conway, AR, with the sky blue and not much wind blowin' in my face.  Getting out of Conway meant dealing with a fair amount of traffic, but it soon thinned out.  I was on a smaller country road before I knew it and, voila, a donut shop.   Time for one of my favorite ways to consume calories...plain donuts.  They've always been my favorite, followed by glazed donuts.  And, of course, the plain donut has the most fat.  Didn't stop me from eating them.  Ok, a donut shop run by some Asians, not sure where they were from, but it did strike me as different... a donut shop in rural Arkansas run by a family who had moved to the U.S. from an Asian country.  How to turn your world upside down...  Ate lots of donuts and drank some coffee, then got back on the road.  It was only about 40+ miles to Little Rock, where I'd spend Thursday night, all day Friday, and then fly out Saturday afternoon, which would give me a little time to play around there.
In doing a little research about getting into Little Rock, I found a single lane bridge that crossed the Arkansas river and would put me near the motel I was staying at while in Little Rock.  The motel was near Spokes, the bike shop that would ship my bike back to Silver City, and near some cool neighborhoods, as well as being relatively close to downtown Little Rock.  The ride was pretty uneventful except for some asshole drivers in Maumelle, AR.  These people deserve to get awards for being assholes.  Fortunately, I was out of that hole in a short time and near the single lane bridge.
Of course, as I approached the bridge, which was in a more rural area along the river, I saw a sign saying, "Road Closed".  Well, I could see the gate that was closed, so I rode up to it to see if there just might be a possibility of taking my bike across.  Sometimes, when a road is closed, it's closed to motor vehicles, but bicycles can manuever through.  As I approached the gate, I thought that would not happen since there was no way around it and no one around to open the gate.  Preparing to turn around and seek another route, I pulled out my phone and began looking on Ride With GPS for some other way.  Suddenly, the gate began to open...YES!  I pushed the bike forward and was making my way through a small hydroelectric generating station when I heard a man's voice calling to me.  He told me that he couldn't let me through and he'd only opened the gate because he thought I was the rig that was due to arrive that day to replace some of the large gates over the large holes filled with water that I was trying very hard not to fall in.  Would not have been good.  With some hope in my voice, I asked him if what I was looking at not too far away was the other side of the river???  Another 5 feet and I'd be past these open water holes and onto the single lane bridge...but, no, he couldn't do that.  He would be fired if he did and he told me that I had to turn around and go out the gate I came in.  Explaining where I'd started and where I was headed....just across that bridge that was 5 feet from me didn't help..so it was back out the gate to find another way.
Once on the other side of the gate, I looked at my phone again to see where I could cross the river.  Seemed like there was a bike path I could take that would take me to a pedestrian/bike bridge over the river that put me in the parking lot of the Bill Clinton Presidential Library.  Ok, let's see if I can find this.  With only some minor issues, I found the bridge and crossed over into Little Rock.  No, I didn't stop at the library.  While in Little Rock, I used Uber to get around and one driver said he wanted to open a cigar store next to the Clinton Library called "MONICA'S", with a replica of the blue dress, and a box of the cigars she liked...on sale, of course.  Thought he could make money for a while on that theme.
Ok, found my motel, called Spokes, and brought my bike over to get it boxed up and sent out.  Talked with several of the Spokes staff, all of whom were very friendly, and they gave me some ideas for dinner.  Seems there were a few good sushi restaurants nearby.  I love sushi.  From that point on, I was using Uber to get around Little Rock.  The service is fairly affordable and no tipping either.  That was good. 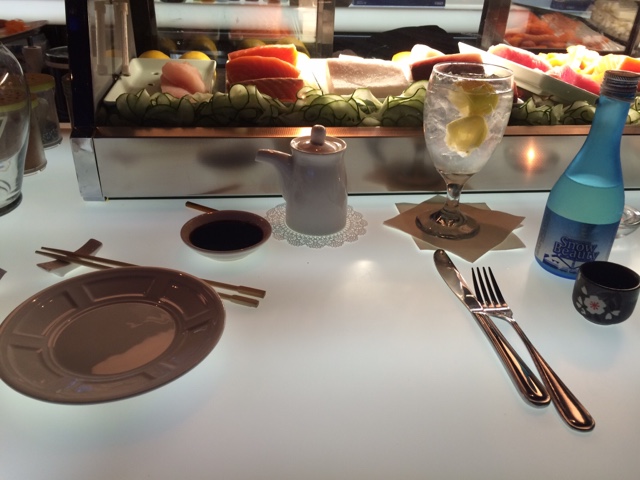 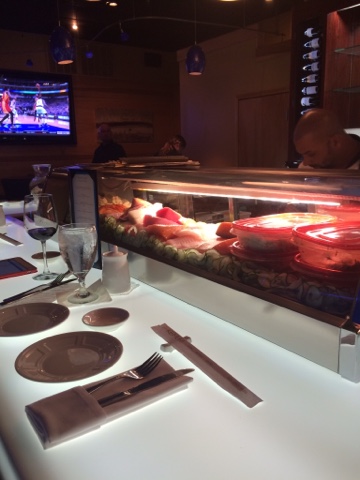 I went to a couple of sushi restaurants.  The one in the photos above was quite pretentious, with the waitress trying to tell me what was on the platter the sushi chef gave me.  I interrupted her, informing her that I'd been eating sushi for 30 years and that I was aware of what was on the platter.  This was after she'd explained the menu to me when I first sat down.  She irritated me, which was not good.  The sushi was good, as was the sushi the night before.  The places shall remain nameless.
The other thing I was looking for, but did not find, was decent espresso.  Despite the rave reviews, the places I went to did not live up to their reviews.  Again, they'll remain nameless.  There is one of these "espresso" shops that deserves mention...Andina Cafe (http://andina-cafe.com/) in downtown Little Rock.  This has to be the worst espresso shop that I have ever been in.  How they got rated as being an excellent espresso cafe is beyond me.  The double espresso I got was in a regular coffee mug with no crema.  WTF???  Do not bother stopping in here.
The one place that I found in downtown Little Rock that was good was a pizza/microbrewery...Vino's (http://www.vinosbrewpub.com/).  The pizza was excellent and the stout was tasty.  Reminded me of East Coast pizza, which is my favorite.  Now, I'm sure there are plenty of good places to eat, and drink, in Little Rock.  I was only moderately successful, but it seemed like a fairly decent city.  Not sure I'd put it on my list of places that I want to visit again, but, should I be nearby  again, I'd stop at Vino's for sure.
On Saturday morning, I headed to an area on Kavanaugh Street, looking for an espresso shop that had good reviews.  To my surprise, there was a small festival going on...Etsy Little Rock...and they had a microbrewery set up to sell pints there.  The expresso was mediocre.  The beer was good.  I found a place for lunch, then called Uber to take me back to the motel, pick up my panniers, then take me to the Bill and Hillary airport.  While at the airport, I found a decent BBQ place and had another beer, which made things more pleasant while waiting for my flight to Albuquerque.  This wasn't how I expected my trip to end, but that's how it was.  I got into Albuquerque late and Isaac was there to meet me.  Too late to get something to eat, we headed to his house, had a bite, then went to bed.  In the morning, we had breakfast then he dropped me off at Albuquerque International, where I got my flight on Boutique Air to Silver City.  Below, a photo of the plane and my pannier inside the plane. 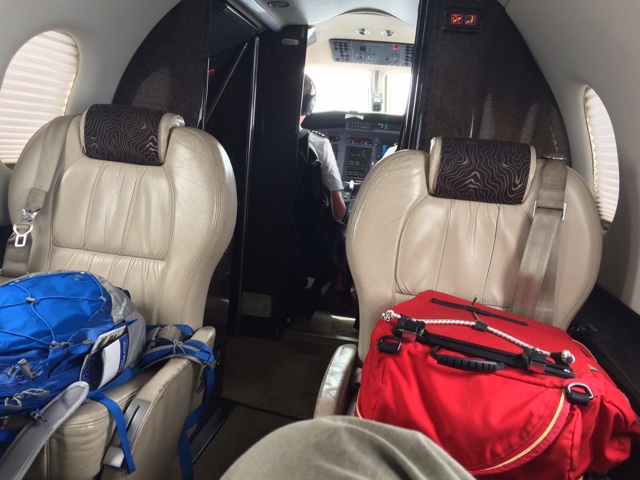 On arrival in Silver City at Grant County Airport, Eileen was waiting for me and I was extremely happy to see her.  I had really missed her on this trip.  So, we headed home and I have not regretted cutting this trip short.
Now, to end this post...a tune.  Since part of this ride was to attend my high school reunion again, here's a tune that was a big hit in my senior year, "Wooly Bully" by Sam the Sham & The Pharoahs (http://youtu.be/OcguLZaMelE).  And one more..."Hang On Sloopy" by The McCoys (http://youtu.be/TlTKhPkZSJo).  Oh, what the hellllllll...one more, just to drive you crazy, "Eve of Destruction" by Barry McGuire (http://youtu.be/qfZVu0alU0I).  Til the next time....
Posted by Patrick Lyford at 3:05 PM