"Q: What three streets in Chicago rhyme with vagina?"
"A" Paulina, Melvina, and Lunt."
A little Chicago humor for Alex. Just about 10 days ago or so, Alex contacted me via Warmshowers (https://www.warmshowers.org/) and, no, just because my wife, Eileen, thinks so, it's not a porn site. This site is for cyclists, primarily touring cyclists, from all over the world to connect with other cyclists for a place to stay, set up a tent, get a shower, have some food maybe, and maybe a beer or three. Plus, it's a good way to meet people and to have a cyclist, who's familiar with the local area, provide some good advice on where to go, what to see, where to eat, how the roads are, what traffic is like, etc. My wife and I enjoy it primarily because of the people we meet who are traveling through on the Adventure Cycling Association's (https://www.adventurecycling.org) Southern Tier Route or their Great Divide Mountain Bike Route. We've met more people from around the world via Warmshowers here in Silver City, NM, than we have anywhere else that we've lived.
Alex is self-employed back in Chicago with his lawn care business. He also has done, maybe still does, construction work. 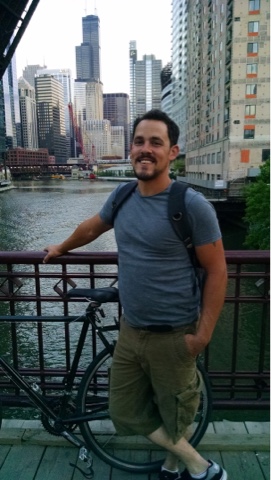 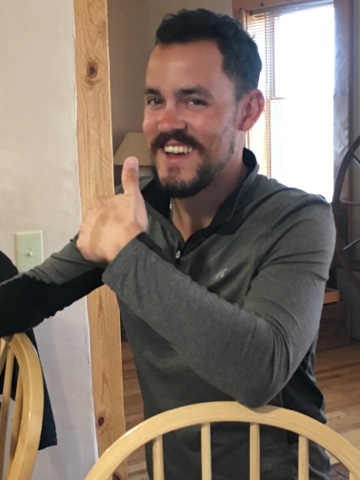 This winter, Alex decided to ride his bicycle across the U.S. via the Southern Tier Route, West to East. I believe that he said he was 28 yrs. old. Good time to ride across the country. Actually, any age is a good time to bicycle across country, in my opinion. One of the dicey prospects of riding across the U.S. In January/February is the weather, which can be variable, to say the least. Alex happened to hit this area during a cold spell. Because of that, we weren't able to invite him to stay more than one night because, for his riding pleasure, he needed to "get out of Dodge, pronto!" as they say out West. Alex got into town on a Friday and, on Monday, Silver City was due to get hit with a snow storm. Sucks for cycling. So, on the morning he was due to arrive at our house, I headed out on Rt. 180 West to see where he was and to see if he wanted me to take his panniers, so he'd have an easier ride in to town. Or to see if he'd like a ride into town and skip the bicycling in exchange for a few beers.
In Buckhorn, NM, I found Alex at the RV Park, just getting his gear together so he could ride into town. On offering him the option of throwing his bike and gear into the car and taking a faster ride into Silver City, he unhesitatingly said yes. I think he had tears in his eyes, but I'm not sure...just kidding. Nights had been cool, as soon as the sun set, and the days had not been extremely warm, but tolerable for riding. He did have tailwinds, which is always good. After getting the car loaded up, we headed for Silver City and the beer. This is Alex's first long trip as a self-contained touring cyclist. He has done a century ride (100 miles) between Chicago and Milwaukee (my wife's hometown). Touring, however, is another beast altogether. He was doing fine with it except for the cold nights. His overnight stay with us was his first day off from the bike since Los Angeles, CA, where he started. When we got to the house, I got out some sandwich makings for him to fix himself something to eat...and offered him a beer. He'd been having some trouble with his rear derailleur and I offered to look at it for him. A few years back, a cyclist had shown me how to make the adjustment to the rear derailleur that was the simplest instruction I'd ever had on how to do it. So, a few quick moves and it was done. Then it was time to clean up his drivetrain, which was fairly dirty. Hopefully, it worked well for him after he left. Haven't received any death threats from him yet.
I made some homemade pumpkin pie, cooked up some rice and chicken breasts for dinner, and more beer, of course. Alex had settled in, taken a shower, got unpacked for the day and night. He seemed to be enjoying the day off the bike. I knew the next few days would be windy, colder, and potentially some snow, but a real chance for rain before he got to Las Cruces, NM. So, we enjoyed our time at the house. He was telling me that his Dad is into home brewing. Now, I'm sure he told me what work he did, too, and what his Mom did, but all I remember is the home brewing. Beer brain. Always have been.
Here's a picture of my pumpkin pie. Didn't get any photos of the chicken breasts. Oh, and a photo of my wife and the pie. Both are good looking, eh? 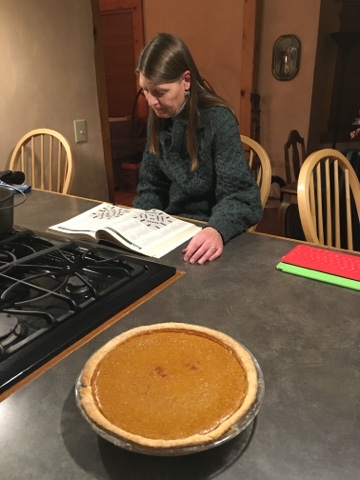 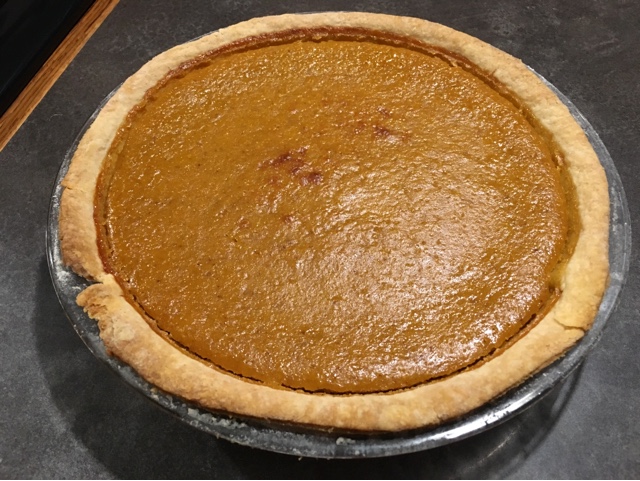 Homemade from scratch...cooked the pumpkin, made the crust, yum! 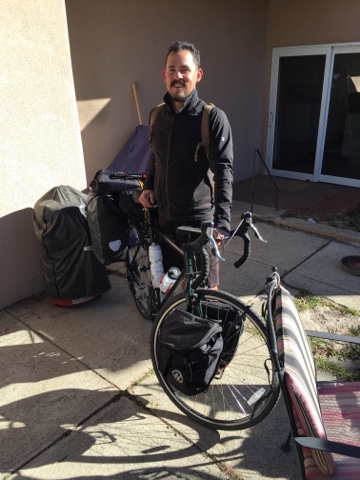 Alex loaded up and ready to ride on Saturday morning 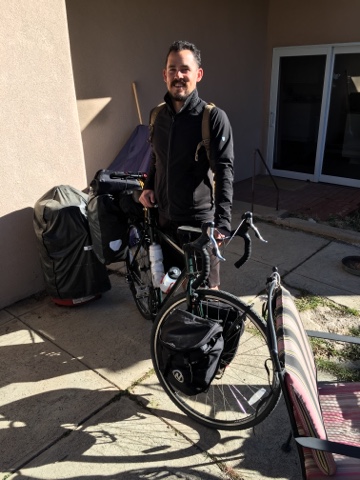 Here are a couple of VERY short videos with the usual "Hello" and "Goodbye" to Silver City...
https://youtu.be/GUBd_vkJJYk and https://youtu.be/cp1S5KjalUw
I heard from Alex a few days ago via this website/blog and he's been enjoying warmer weather in Texas. With friends in Austin, he's planning to spend a few days there enjoying himself. As a touring cyclist myself, I can attest to the fact that a few days stop somewhere, particularly a place like Austin, is great fun. Friends make it even better.
So, best wishes to Alex for a safe and great journey, with more to come down the pike. For now, it's time to exit this post. Not sure if Alex is a jazz fan, but there's nothing more indigenous to Chicago than jazz. Here's a new one done the old style way..Robin Adele Anderson doing "Gangsta Paradise".
http://youtu.be/Rve03u7oEvI
Hope you enjoy it, Alex. Come back for a visit anytime...it was a pleasure meeting you. My wife and I enjoyed your company. Happy trails...
Posted by Patrick Lyford at 7:33 PM