"When you see something that is technically sweet, you go ahead and do it and you argue about what to do about it only after you have had your technical success. That is the way it was with the atomic bomb." ~ J. Robert Oppenheimer

An amazing quote by one of the major architects of the atomic bomb that leaves me speechless. It strikes me as incongruent to use the word "sweet" in any description of the creation of the atom bomb.

In what way is this related to this web posting? In lots of ways, actually. Since 2016, Eileen and I have talked about what we wanted to do next and how we could help Eileen's mom, Marilyn (she prefers the name Maril), who, like all of us, is aging and would benefit being closer to family that can be of help to her. So, we realized more than decided that, after looking at our options, moving back to Albuquerque would be the better choice. With that decision made, Eileen began seeing what jobs might be available in the Albuquerque area. Several opportunities came up, but, for various reasons, they weren't the right ones. We began to wonder if anything would open up that would serve our collective needs..hers, her mom's, and mine. I think both of us were ambivalent about leaving Silver City. We had many friends there and really enjoyed the small town life there. Considering what we wanted to do, moving was the decision that made sense.

Out of the blue, really, a job opportunity opened up in Los Alamos, NM. In a "Oh, what the hell" kind of moment, we talked about it and she applied not really thinking much would come of it. Well, something did come of it and we're now living in the Atomic City, as it's fondly known here in Los Alamos. Like "Big Apple" is used synonymously with NYC, "Atomic City" is the name used here. Streets have names referencing the bomb...we live off of Trinity Drive. The library where Eileen is now the manager is off of Oppenheimer Place. You get the picture...

While it's not Albuquerque, where we thought we'd end up, it is close to many things that we both wanted back in our lives and we are working on relocating Marilyn to Los Alamos. It's a small place like Silver City. About 12,000 people. Several good restaurants, a great brewpub, good cycling with lots of climbing, and proximity to Santa Fe and Albuquerque. We're close to friends in Albuquerque and can get there in about 90 minutes vs. the 4hrs it took to drive there from Silver City. It's actually a better place to move Marilyn. The small size will make it easier for her to get around here. Albuquerque is a big city with lots of fast traffic and greater distances to go to get to things/places there. So, despite the planning that we made and talked about, the "out of the blue" factor won out once again.

Fortunately, as it turned out, by starting early with our talking and planning, I was able to get into our shed to sort through things we'd collected over 11 years. Eileen would disagree with the "we" part there since I'm the more avid "collector" in this relationship. It took me several months plus to go through things and to turn off my Dad in my head, who kept saying to me, "But, it's still good and you might need it." Not having used something in 11 years is a good enough reason to give it to someone else who would use it or to a community agency that could make money off the items in order to help those in need. We gave a lot to those agencies...so, hopefully, many have benefitted from our discarding very good items that still had lots of life left and that my Dad didn't roll over too many times in his grave. Growing up, my Dad saved everything...not OCD or anything like that...but, he had enough stuff that neighbors would come over and ask my Dad if he might have something that would work for them. He'd think for a moment, go down into the basement, rummage through his "stuff", and, most often, would come back up with something the neighbor could use. Amazing, really.

So, as of June 20, 2016, we are now residents of the Atomic City, Los Alamos, NM. It's really interesting..about 60% of the land here on top of the mesa, where Los Alamos is located, is owned by the Department of Energy. As I've driven and bicycled around this area, I've seen many signs..."All vehicles are subject to random searches"..."Aerial monitoring of DOE property"..."Danger: Explosives"..."Danger: Firing Range"..."This area is monitored by cameras". Gives me an erie feeling. At one time, there was a nuclear reactor located here. While the national labs still do research on weapons, atomic and otherwise, they also do non-military research. Most of the people we've met here work for the labs or are married to someone who works for the lab. Eileen is one of the ones who doesn't work for the lab. She is the manager of the Los Alamos County Library System that has two libraries..one in Los Alamos and one in White Rock (a suburb of Los Alamos, since housing is so scarce in Los Alamos due to the number of employees at the lab and the shortage of available land for houses, apartments, condos, etc.). 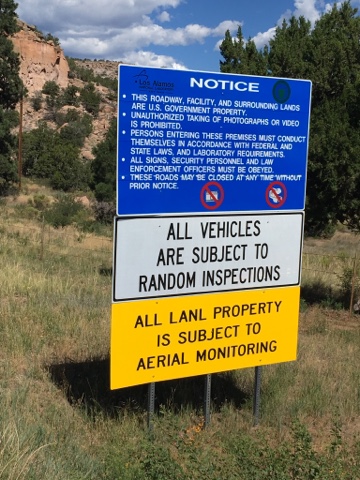 One set of signs that dot the DOE roads... 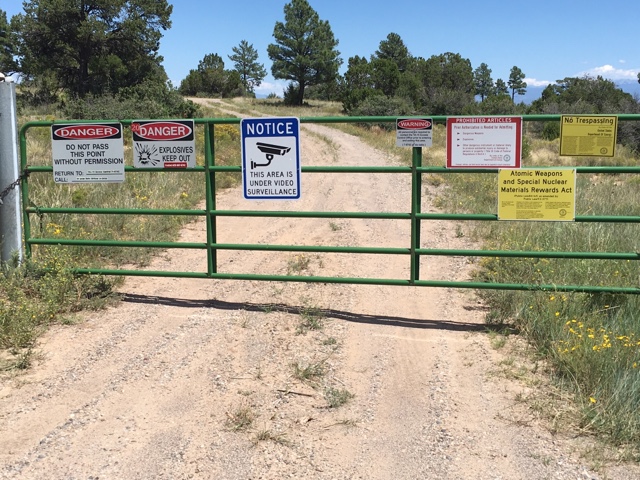 More signs along the roads on DOE land.
This is a significant change for us and for Eileen with her job, yet it feels good to be here and we're excited to see what "out of the blue" brings to us. Eileen is very excited about her new job and has been knee deep in learning what the system is and how it functions here. I'm sure she will bring some good things to the library system. Amazingly, 85% of the people in Los Alamos County use the libraries here. I find that to be an incredible statistic. Lots of smart people here, too. About 26% of the population here has a Ph.D. Not too shabby. My big complaint: internet and cell phone coverage is terrible. You'd think with the labs here there would be great internet and cell coverage, but no.

As I've gotten out on the roads with my bicycle, I've discovered that the roads here, like Silver City, are not flat and the elevation here is higher than it was in Silver City...7300' here vs. 6000' in Silver City. The climb to the ski area from our house, which is 6 miles away, goes from 7300' to 9400' and kicks my butt. Most of the climbing is in the last 3.5 miles, almost 2000' of it. I've been up there at least 3 times, so far. Another climb is on NM4 that heads to Jemez Springs and the Valle Caldera. It has about a mile more of climbing than the climb to the ski area and is equally as steep. 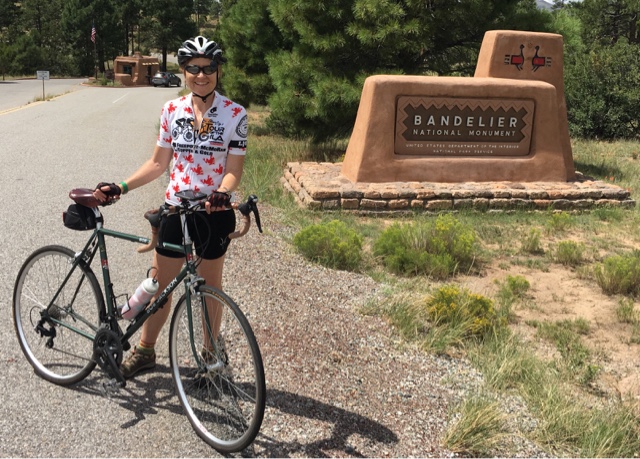 Eileen at the Bandelier National Monument. 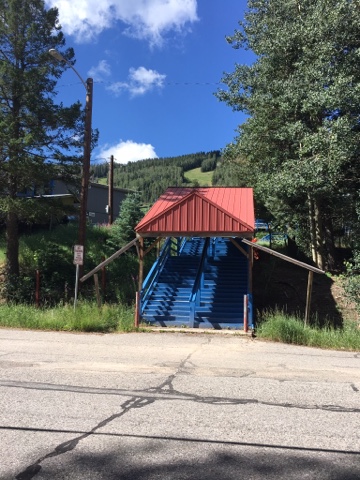 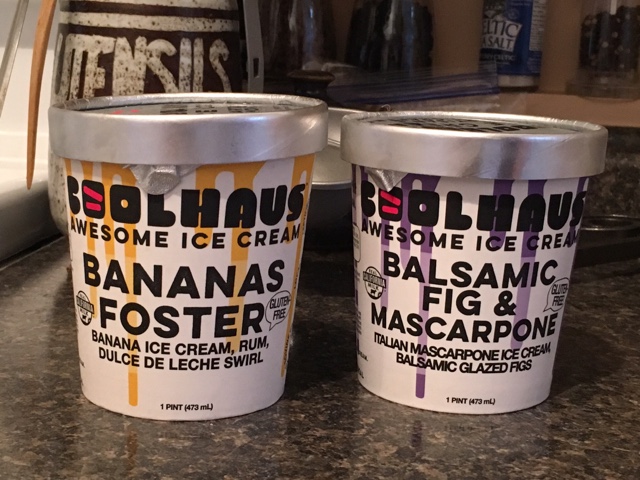 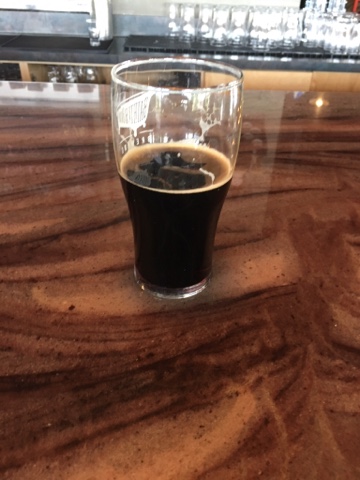 Oh, and one more benefit...
One of the things that will be different for both of us here is...snow. About 55 inches of snow. That's the average annual snowfall in Los Alamos. Fortunately, the elevation, dry air, and the sunshine should make the winters more bearable, I hope. We've both lived in essentially snow free places for several decades. It could be a shock to our systems. Like making lemonade when handed lemons in life, however, we both will get back into skiing again. Looking forward to that.

So, time to close...and here's a tune from Glen Campbell, who died just a little while ago. He bravely faced his end time and his alzheimers disease in an incredible fashion. I've always liked his music. Here he is with many other famous country western singer/songwriters performing "Gentle On My Mind", written by John Hartford: https://youtu.be/ETkzK9pXMio  Not sure if people realize that he used to play with the Beachboys, including the famous "Pet Sounds" album, and, whenever Brian Wilson couldn't perform with them, Glen Campbell sang in his place. Hope y'all enjoy it...til next time.
Posted by Patrick Lyford at 3:59 PM