"I used to be Snow White, but I drifted." ~Mae West

Now, for those who know me, it is obvious that the quote above from me is the "clean" version because I know of no time in my whole life where I didn't swear. Swearing for me is an integral part of language. Honed, it's magic in its impact. I will try to minimize the swear words or, at the very least, make them as sweet as they can be. 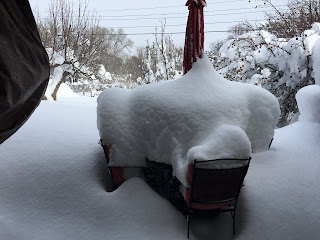 The table/chairs on our patio off the kitchen 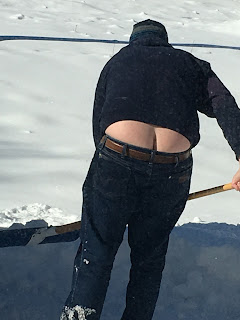 This is the "official" Crackman! 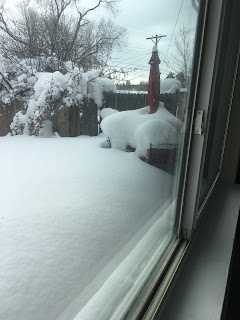 The snow in the backyard. It was almost up to the bedroom window! 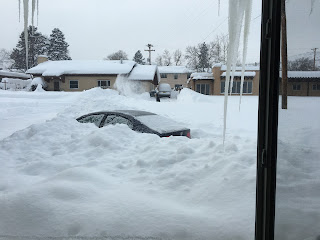 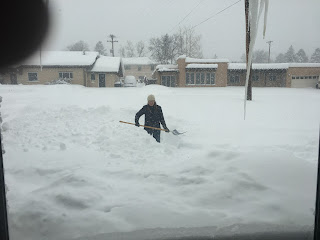 As one can easily see, we got some snow in Los Alamos, NM. First storm was on Wednesday, Dec. 26, 2018. About 8-10 inches or more. This was an opportunity for Los Alamos to show the locals just how good they are with their snow removal plan. It started snowing early in the morning. Los Alamos started plowing the main streets in town around 4pm. Blew me away! I thought that the Public Works department got caught with their collective pants down. Los Alamos is at 7400' and is in the foothills of the Jemez mountains. Would you expect snow? Well, of course, unless you are the snow removal planners. They must be from Florida.

So, is the third storm the charm? GET THE F#@K OUT OF HERE! The third storm kicked some serious ass, particularly the snow planners asses in the Los Alamos Public Works Dept. Since the first two storms had been handled so poorly, we got to live with a storm that dumped about 3' of snow on top of the almost 2 feet we'd already been hit with. That was on Jan. 1, 2019. Twelve days later, on Friday, Jan. 11, 2019, the street we live on was finally plowed to the full width of the street. Yay!

But wait! On Sunday, Jan. 13, 2019, we got hit with another storm that dumped another 12" of snow! More asses kicked! Now, our street is down to a plowed single lane once again. Meet another vehicle on this street? Somebody has to back up or find a driveway to get out of the way. By this time, we're talking about 5' of snow that has fallen on Los Alamos. Public works are up to their eyeballs in snow. They are struggling with snow removal. Seems to me that someone failed to plan for the "unusual" storm since winters have been so mild for the past 5 or more years. Granted, easy to get lulled into a warm weather mindset, but 5 feet of snow should wake someone up to the possibilities of lots of snow at 7400 feet elevation. Don't you think? I'm not holding my breath here, I assure you.

Now, once off "The Hill", as Los Alamos is fondly called, along with "The Atomic City", the roads were very well taken care of. Why? What I've learned is that, when it snows, don't count on the roads in Los Alamos proper to be plowed. Not plowed like anyone who has lived in snow country is used to. Fortunately, for the employees of the National Labs here, they were closed for two weeks, Christmas week and New Year's week. They closed the Labs after the 3 foot snow dump. The county closed for one day, Jan. 2, 2019. Every day of the work week, Monday through Friday, 7,000 people drive up to Los Alamos to work at the Labs. It would have been disasterous had they been required to come to work after the New Year's Day snow storm.

Now, I know that all of you are just dying to know who is the "Crackman"...it's Eileen's son, Isaac. He's still looking for jeans that fit...WTF! Also, the neighborhood streets are being cleared by the great universal power...the Sun...not the Public Works. At least, not yet.

As I said above, this is my first winter in 38 years. I still hate shoveling snow...and mowing grass. One of the things I loved about living in Tucson, AZ, was that I only had to rearrange rocks in the yard once in a while just so it looked a bit different. Otherwise, it was a desert landscape. No snow shoveling or lawn mowing.

For a county that has more Ph.D.'s than any other county, for a county that is the richest for counties under 100,000 population, for a county that harbors a nuclear national lab, I expect more, but I've come to the conclusion that those things don't change human dynamics. Even these people get suckered into believing that the weather forecast is incorrect..."Couldn't happen here. Not after all those mild winters! Haven't had this kind of snow since the 1980's!" Open your eyes, people. Look out your windows. Glad there wasn't any kind of accident at the labs involving radioactive material, eh?

My take on this, for what it's worth. No accolades given for this snow removal effort. D+ for the Public Works Dept of Los Alamos, IMHO.

A tune to exit with...??? "Don't Make A Snowman With Yellow Snow" Is it good? No, but it's message is important. Don't eat yellow snow either! Here's to the Snow Plow Man! Only doing what the snow planners have decided should be done. So, give the planners the thumbs down. Ciao!

Posted by Patrick Lyford at 3:18 PM