"Life does not cease being funny when people die any more than it ceases to be serious when people laugh." ~George Bernard Shaw

"A person doesn't die when he should, but when he can."~ Gabriel Garcia Marquez 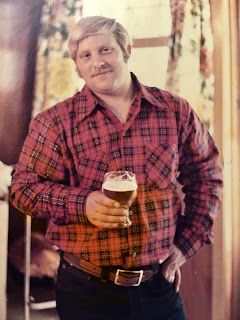 Unfortunately, for me, Gary died on October 28, 2018, two days before I got home. I talked to his wife, Paula, who contacted me when he died. While I was heartbroken that I did not get to see him, I was content knowing that he had died peacefully. If I had been offered the option of having him live until I got home, but he died unpleasantly because of that, I would not have taken the option. Knowing that he was at peace sat well with me. Gary not being here has been hard to adjust to. As with all of us, life will continue until it doesn't. Then we move on, both the living and the dead.

Being home with my family and Gary's family was very different this time. While I was happy that I could be there to help in whatever way I could, not seeing Gary was hard. I'm glad that we had talked a few times by phone, so that we could say those things to each other that were important to say. Writing about this is complicated since I am at a loss for the right words to explain who we were to each other and that we loved each other unconditionally. Gary didn't have to do or be anything that he didn't want to be, nor did I, but that never got in our way. We never argued over politics, money, life, whatever, we just were friends with each other, wherever we were in life. No requirements other than just being there with, and for, each other. And I miss that terribly. While my family is close to my heart, Gary was closer. We stayed friends because we wanted to, unlike family, which is there whether you like them or not.

When I was home this time, it was the first time where I didn't stay at my parent's house and I didn't see Gary. First time in my whole life. Paula and Gary's family are having a memorial for him in May. I will be heading back for that. My plan is to be there for a few weeks, so I can catch up with people that Gary and I knew and hung out with, as well as to see some people that I haven't seen in decades and want to see because I don't know if I'll get to see them again. Odd how aging creates situations that don't come to mind when younger.

I did spend a lot of time with Gary's wife, Paula, and enjoyed that. Talking with her about Gary and about her, wondering how she was doing and how she would cope with Gary not being here for her. She has cared for him for quite a few years and has done much for him. Often, it's difficult to make the adjustment after the death of a spouse, particularly one that you've cared for. Paula is managing very well. I'm certain that it's painful and lonely, but Paula is a strong, determined person. She had to be to live with Gary. As I said, we were good people growing up, but we both have/had our faults, too. I also got to see Gary's twin sister, Susan, and her new granddaughter. Life goes on, eh? And I got to see John, Gary's next younger brother. I was happy to see them and I have fond memories of them, too. John has had a rough time in the past few years as the result of the death of his son from cancer, as well as the death of another nephew, plus the death of his oldest brother, Joe, and now Gary. Well, the whole family has had their turmoil to deal with, not just John. I want to hug them all.

There are also places that Gary and I went to or hung out at while we were kids that I want to go visit again, to bring back the memories of the two of us hanging out with each other whether it was a summer day or in the midst of winter. Places where we went fishing, hiking, hanging out, walking the neighborhood, go see where Pat the cow hung out in the pasture that used to be just down the street from our houses, sit on the dam on the Hudson river, just remembering our life together. For the most part, this I will do by myself because most of this involved just the two of us. I want those memories to flow through my head again, imagining Gary being there with me again.

So, time to bring this to a close...and I need a tune. I'm going with "Always Look On The Bright Side Of Life" by Eric Idle. This is one of those irreverent songs that both Gary and I would like. So, life has moved on and I'm still here. I'm looking forward to the memorial service for Gary in May, so I can catch up with our mutual friends that I've not seen in decades. Not sure what to expect, but I'm ready for whatever comes up. So, once again, Bro, I love you and I will see you again down the road.
Posted by Patrick Lyford at 3:09 PM